I stole that flashy title from my good buddy Alex over at Chavez Ravining. Unlike Alex, however, there's no way in hell that I can consistently keep this up as a weekly tradition. Admittedly, it's also a total coincidence that I've happened to have the time to do this a Tuesday. Hopefully I can get on and post some trade bait more often.

Below are pictures of a bunch of random baseball parallels, inserts, and rookies that are up for trade! 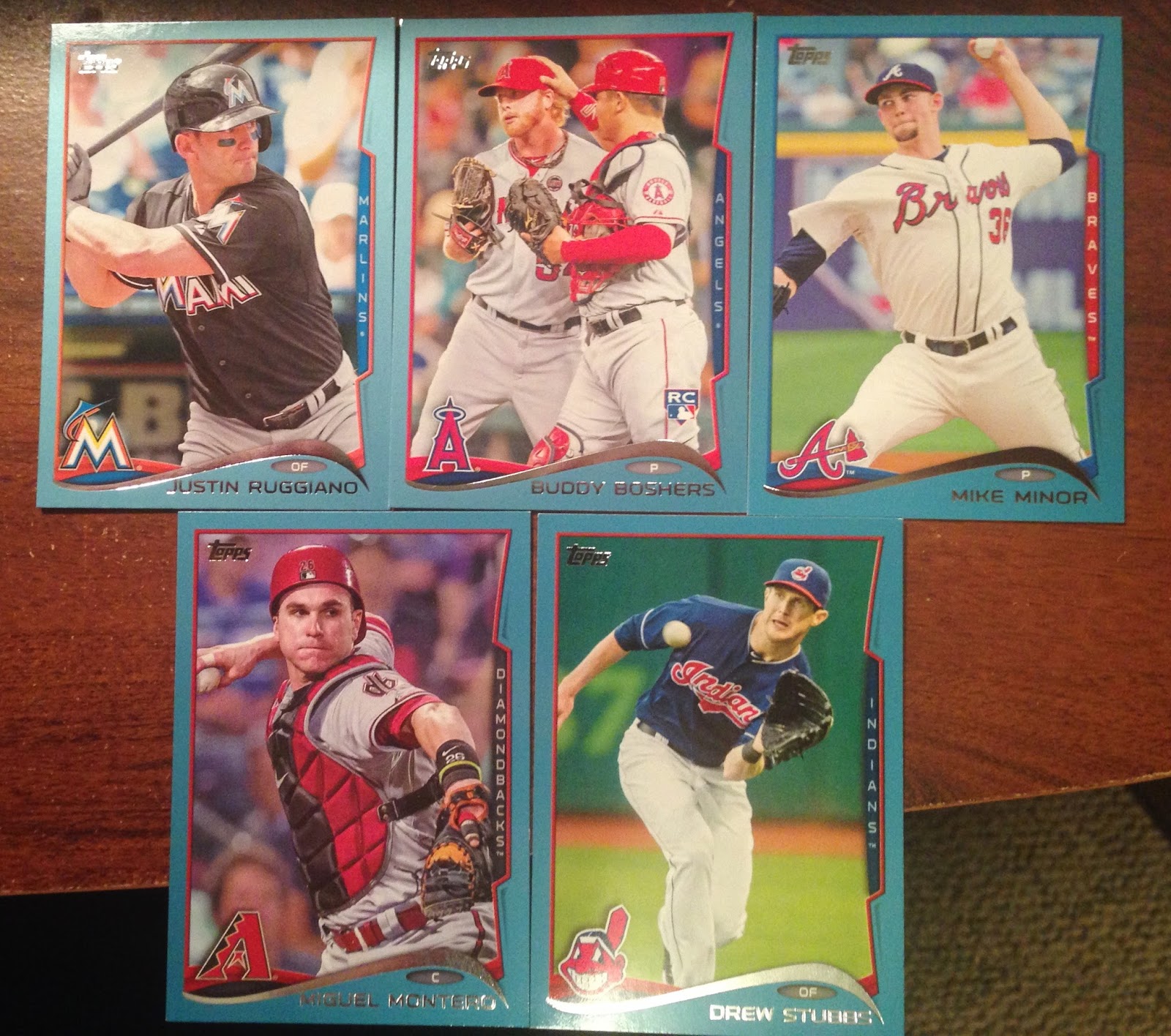 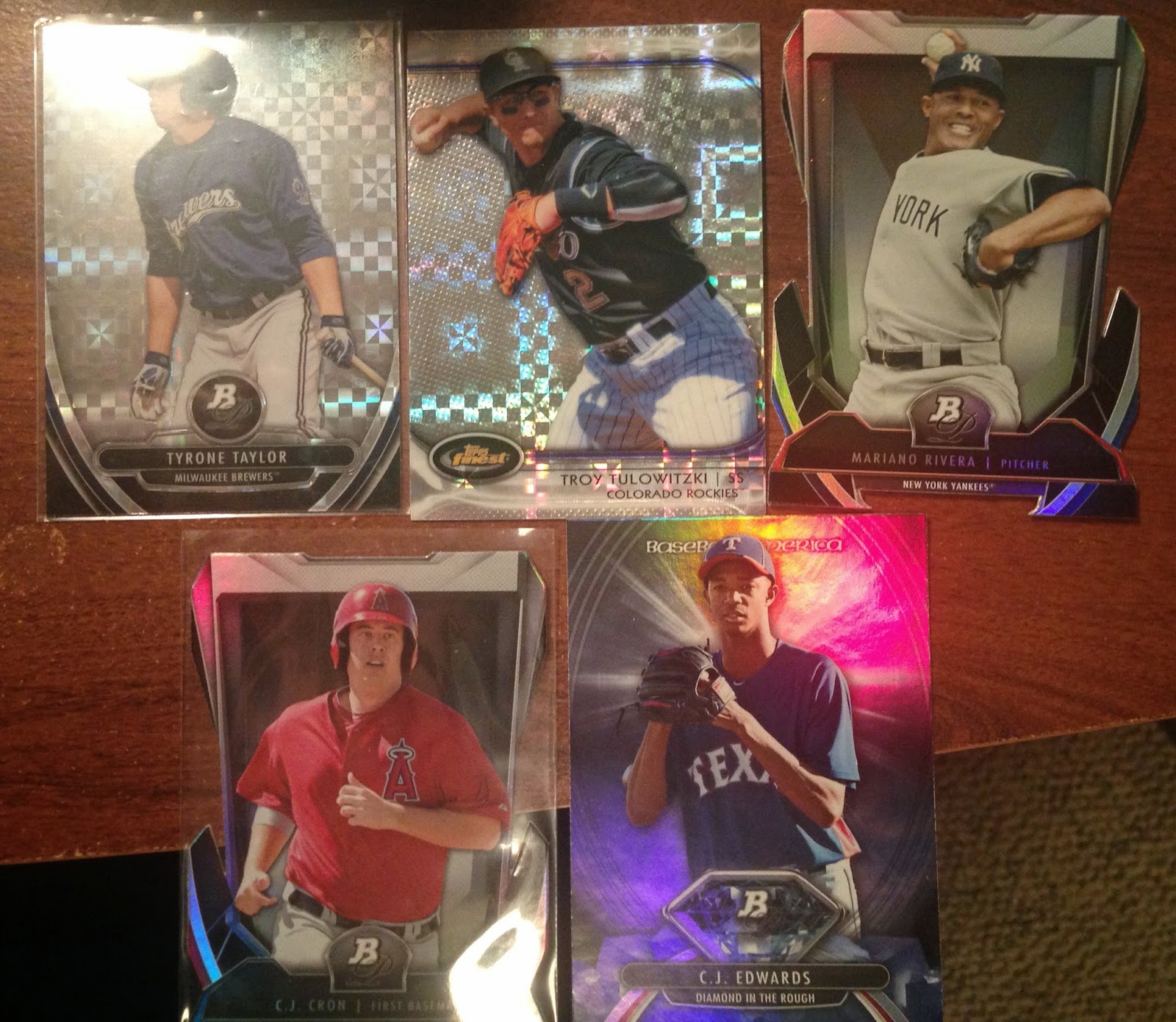 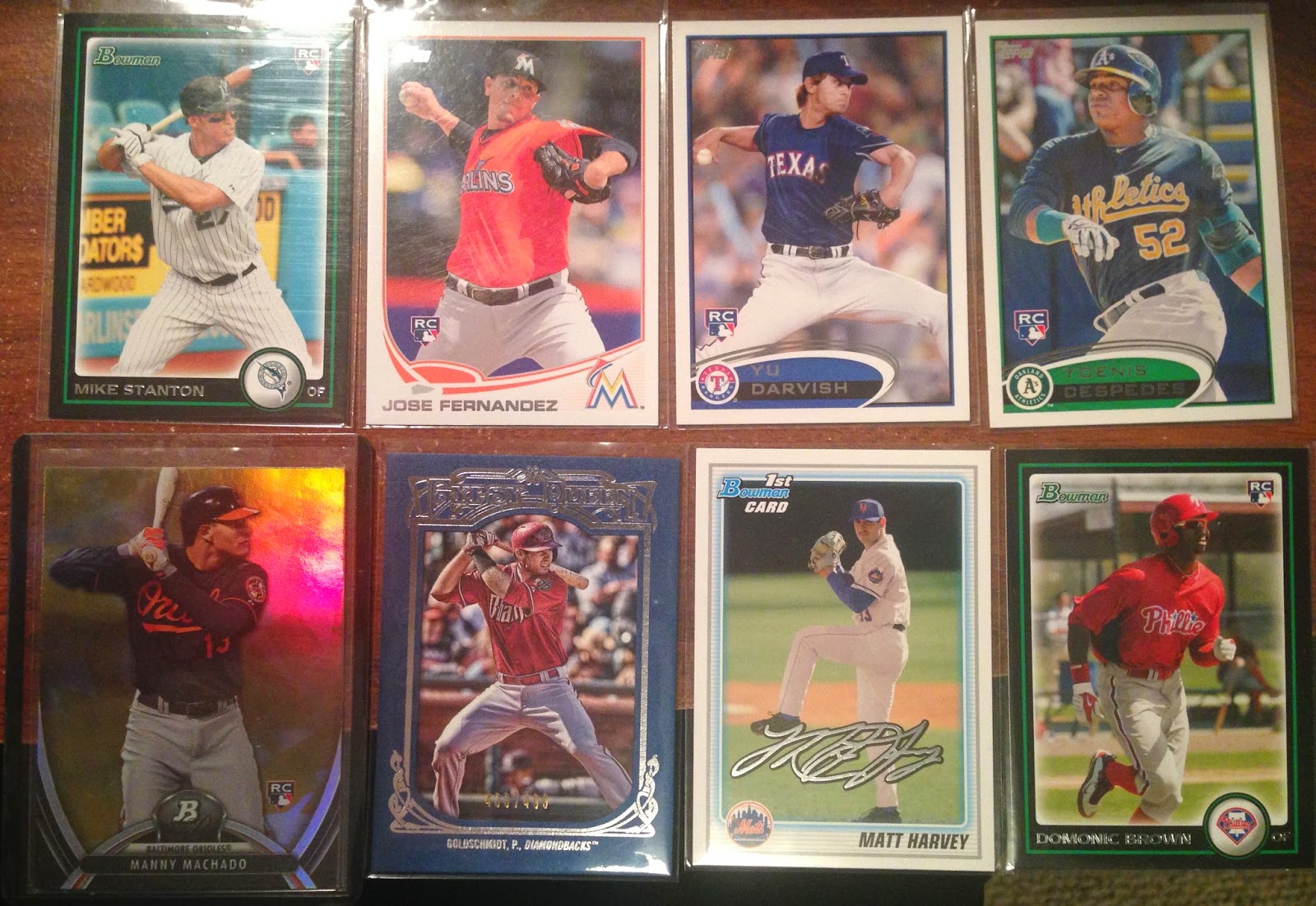 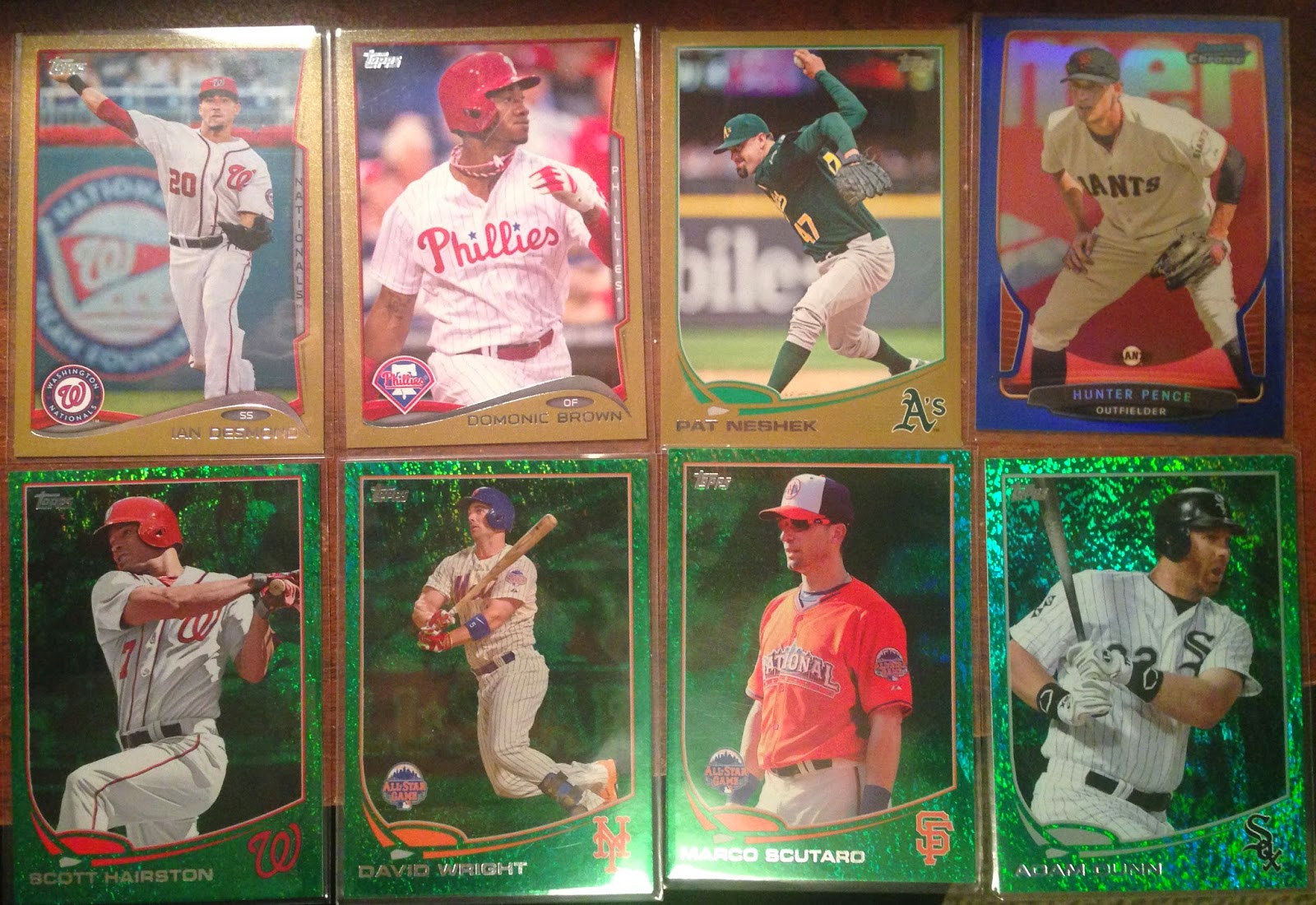 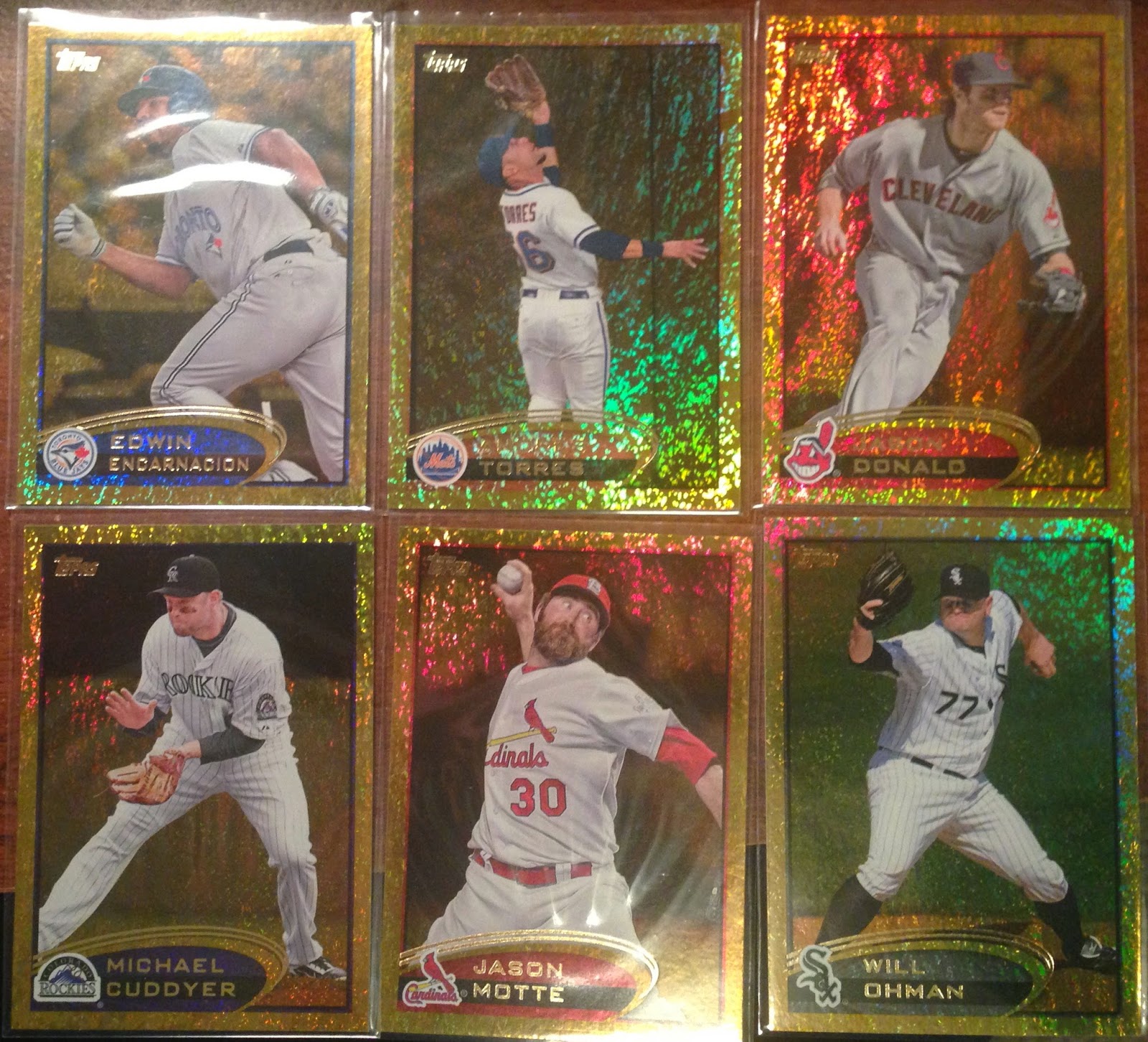 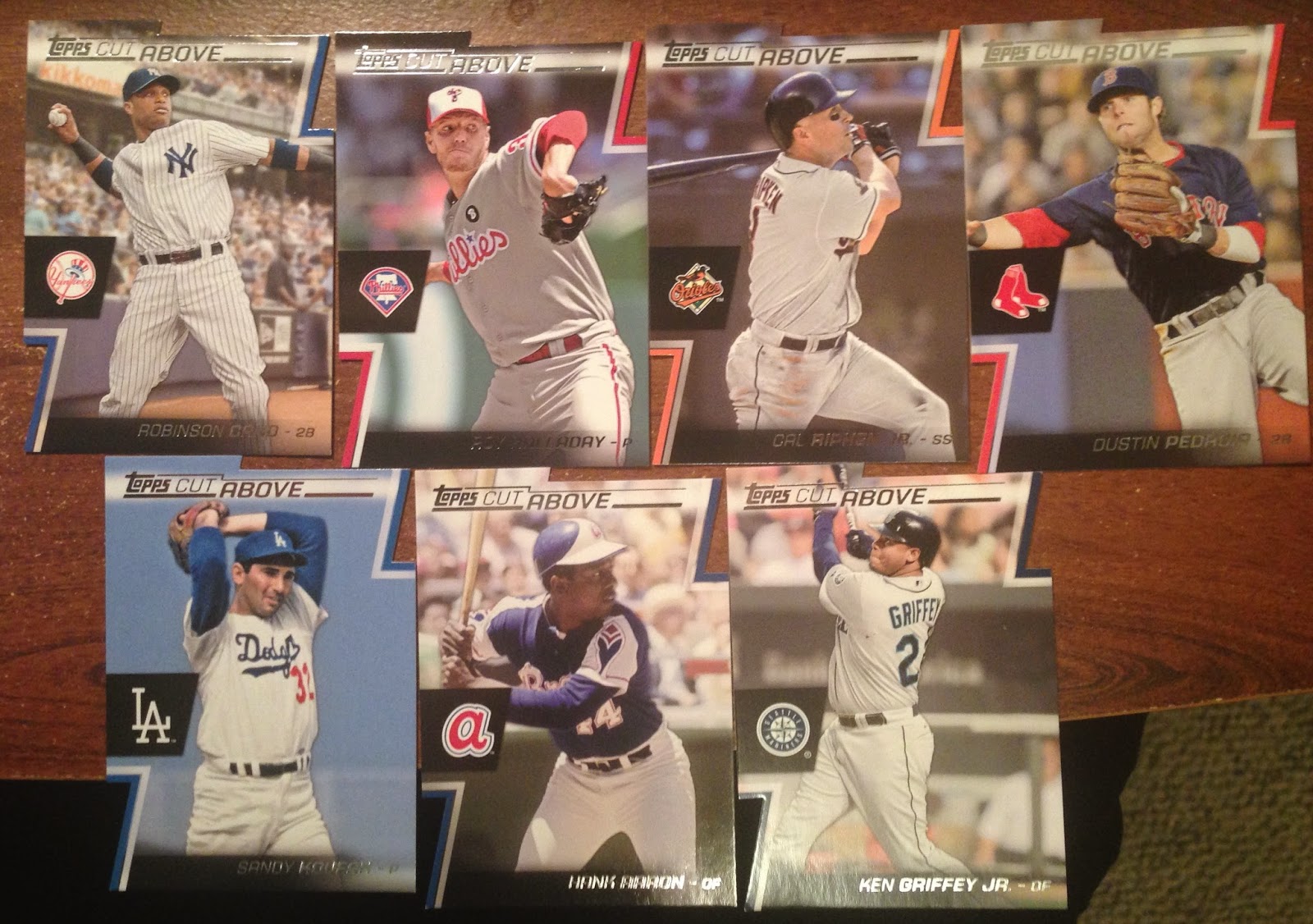 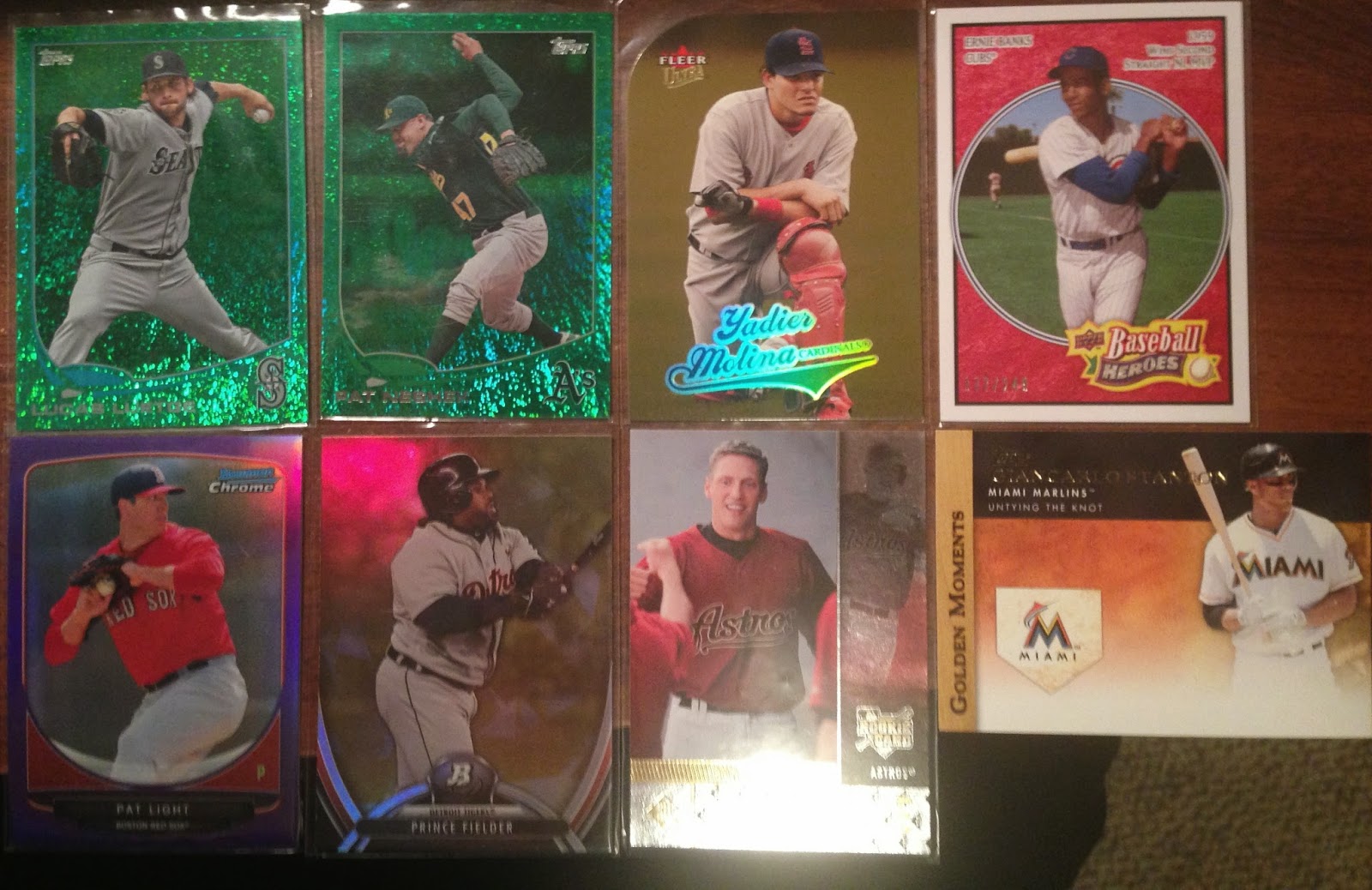 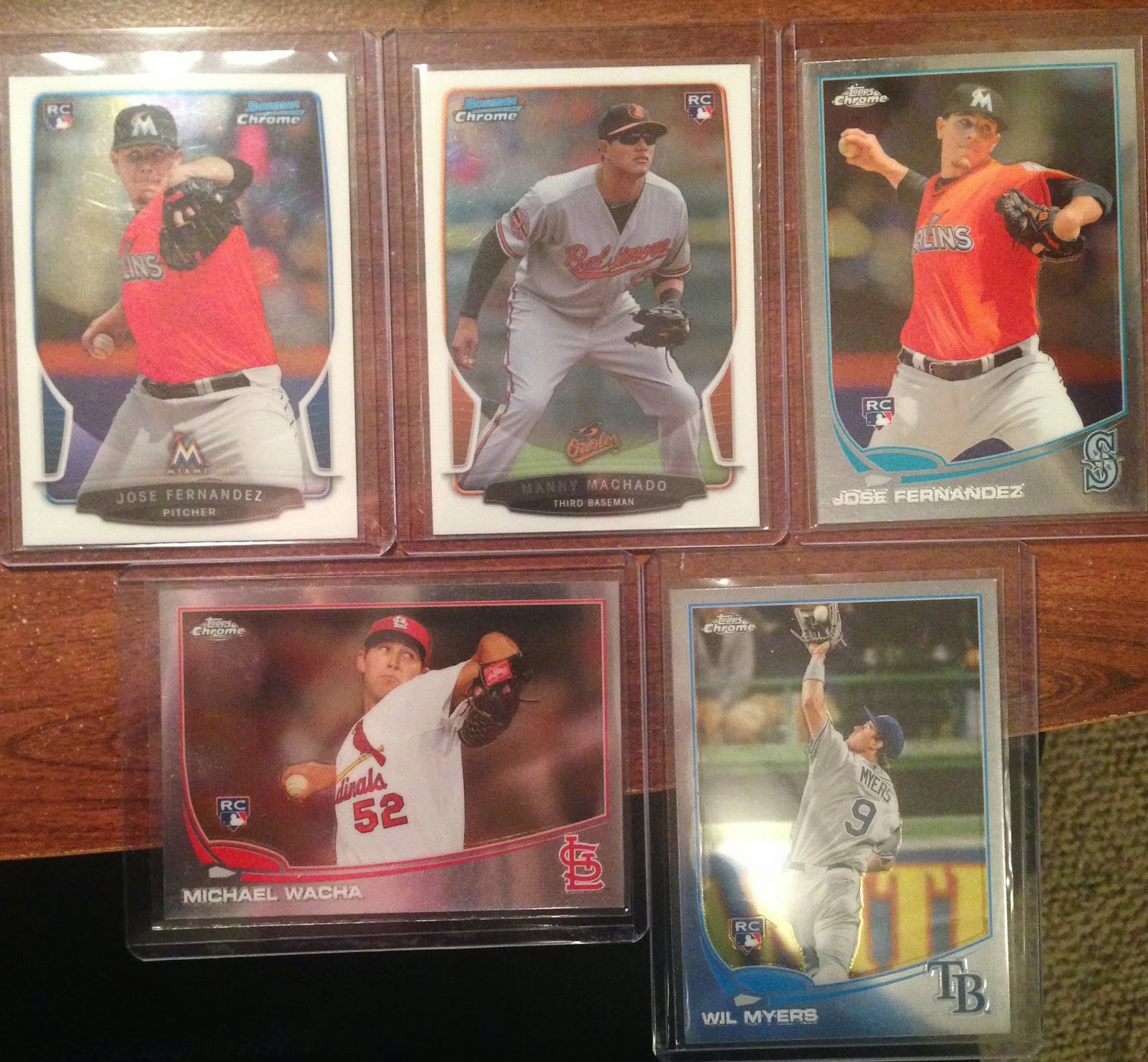 Last thing, I have recently published similar trade bait posts that are worth checking out:

This page has all of my 2014 Gypsy Queen Trade Bait. Everything pictured is available, aside from the James Shields blue border and the Xander Bogaerts mini which have been traded away.

And this page has a ton of autos and relic cards that are for trade. There are few cards on that page that have also been traded away, so check with me before getting your hopes too high! 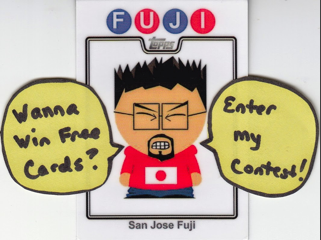 If you haven't heard, Fuji is holding a pretty awesome contest opportunity. There are few elements to it, which I'll let you discover on your own. Head over and check it out - the prizes are going to be HUGE!

You know how this goes, just me showing off some more PC additions. Nothing too extravagant here, but I'm very happy with these purchases! 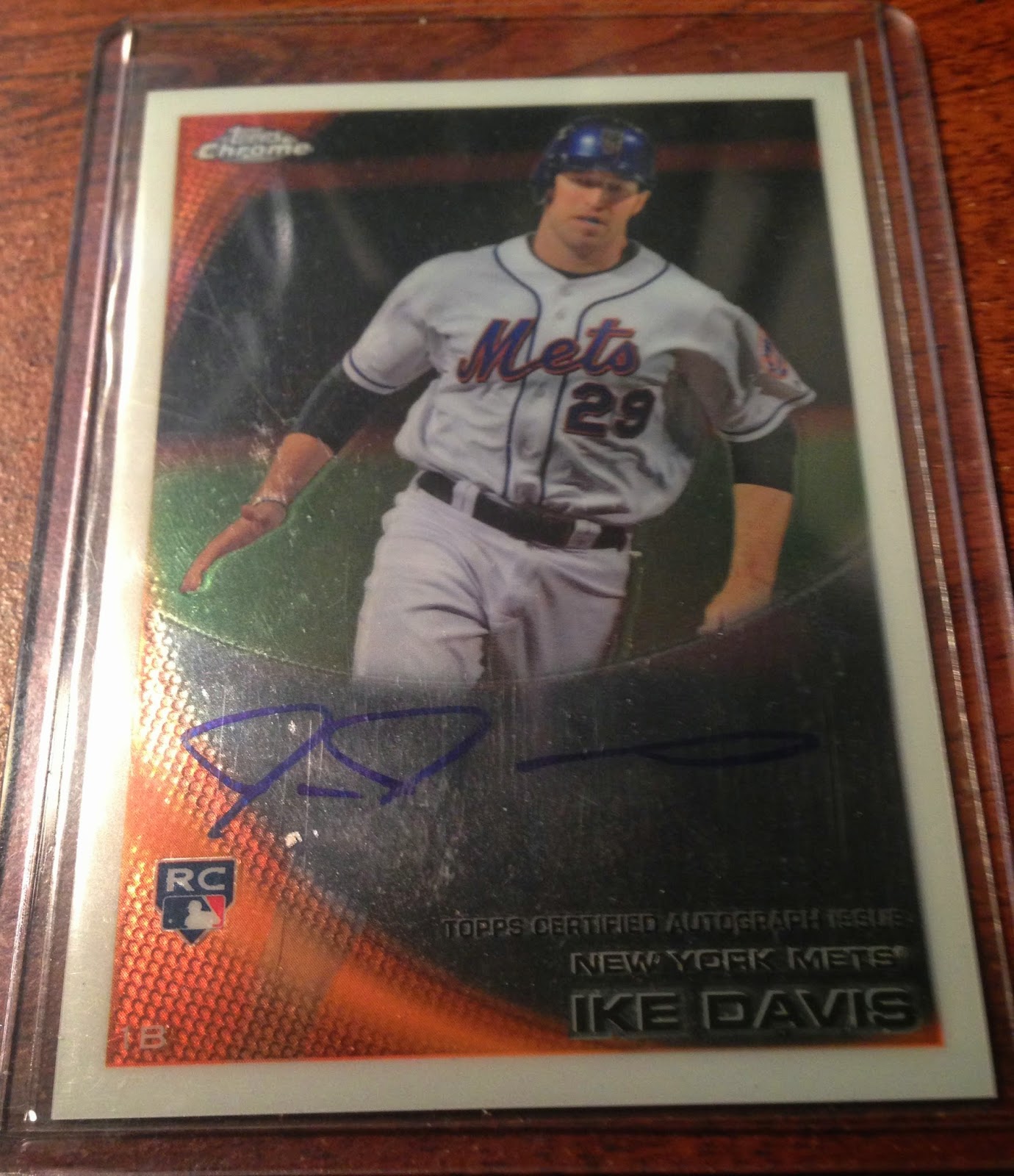 First up is Ike Davis. I'll admit, I wasn't initially excited about my Buccos signing Ike. As a New Yorker with tons of Mets fans for friends, I'm very familiar with his career. I remember when he first came up to the bigs, there was a real buzz surrounding his power. He's certainly showed some of that power, although his batting average has suffered. He's a lifetime .241 hitter, which is the last thing the Pirates need (think: Pedro Alvarez). Ike's struggles have mostly come against lefties, and the Pirates signed him with the intention of throwing in platoon situation with Gaby Sanchez facing the lefties. After Ike's grand slam last week, I'm a little more optimistic. If he stays above .250 and drives in consistent runs, I'll be satisfied.

With all of that said, I definitely wanted to acquire an auto from Ike. He's got plenty of autos out there, and the prices were very affordable. So affordable, in fact, that a rookie auto wasn't out of the question. I snagged this 2010 Topps Chrome for $8 shipped. The cost was little much for such mediocre player, but I decided to shell out a few extra bucks for that "RC" stamp. 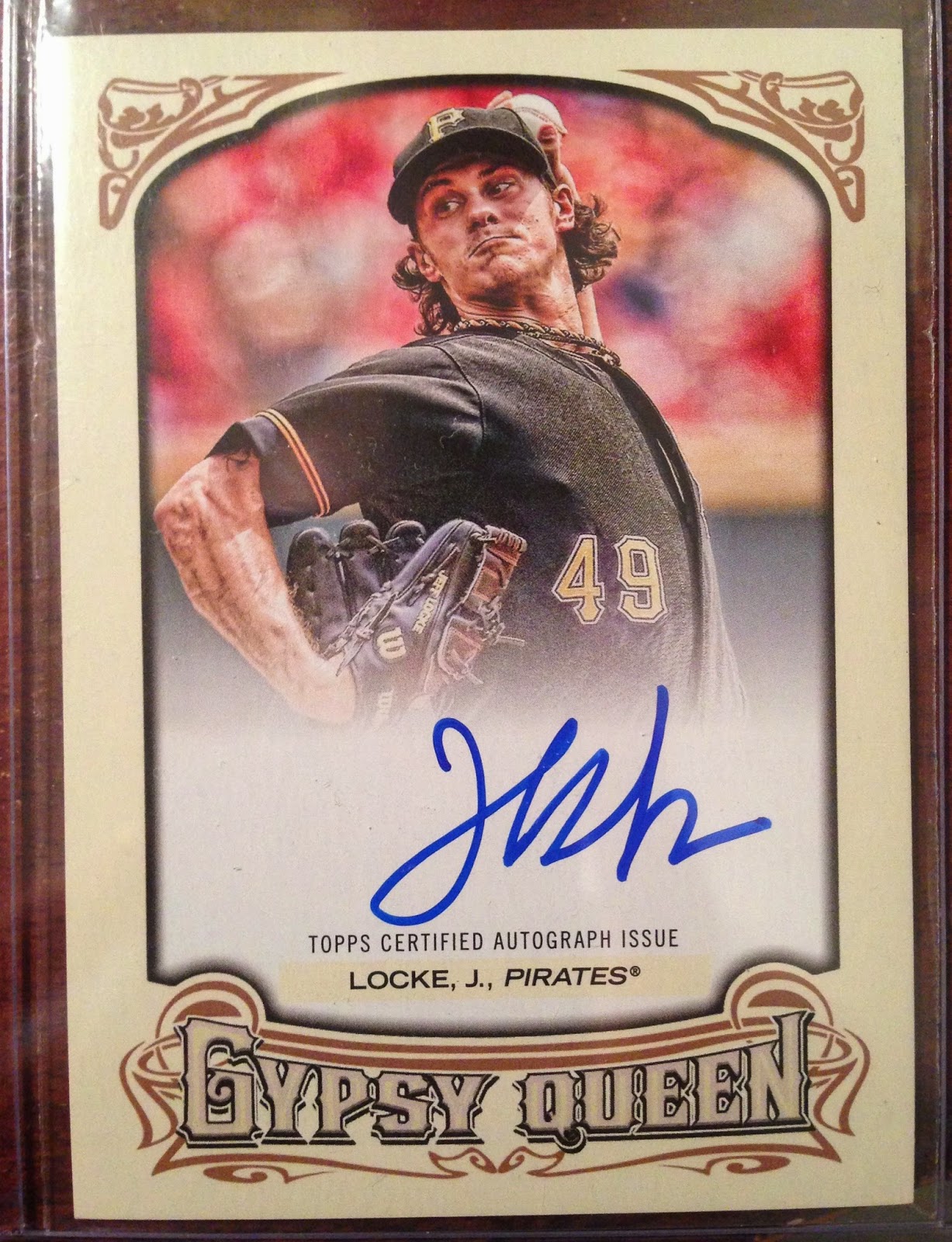 Here's a nice auto from 2014 GQ from Jeff Locke. Locke, a 2013 All-Star, has completely disappeared. After having a fantastic first half last season, he completely collapsed and eventually landed on the DL. He's still battling injuries and trying to get himself straightened out in triple A. As of now, he's not an option for the Pirates rotation. Nonetheless, I'm excited to add another Locke auto to my collection.

This came to me courtesy of a half case break conducted by the wonderful Judson over at My Cardboard Habit. I actually got two of these in the break, so I've got an extra if anyone's interested. Won't take much. 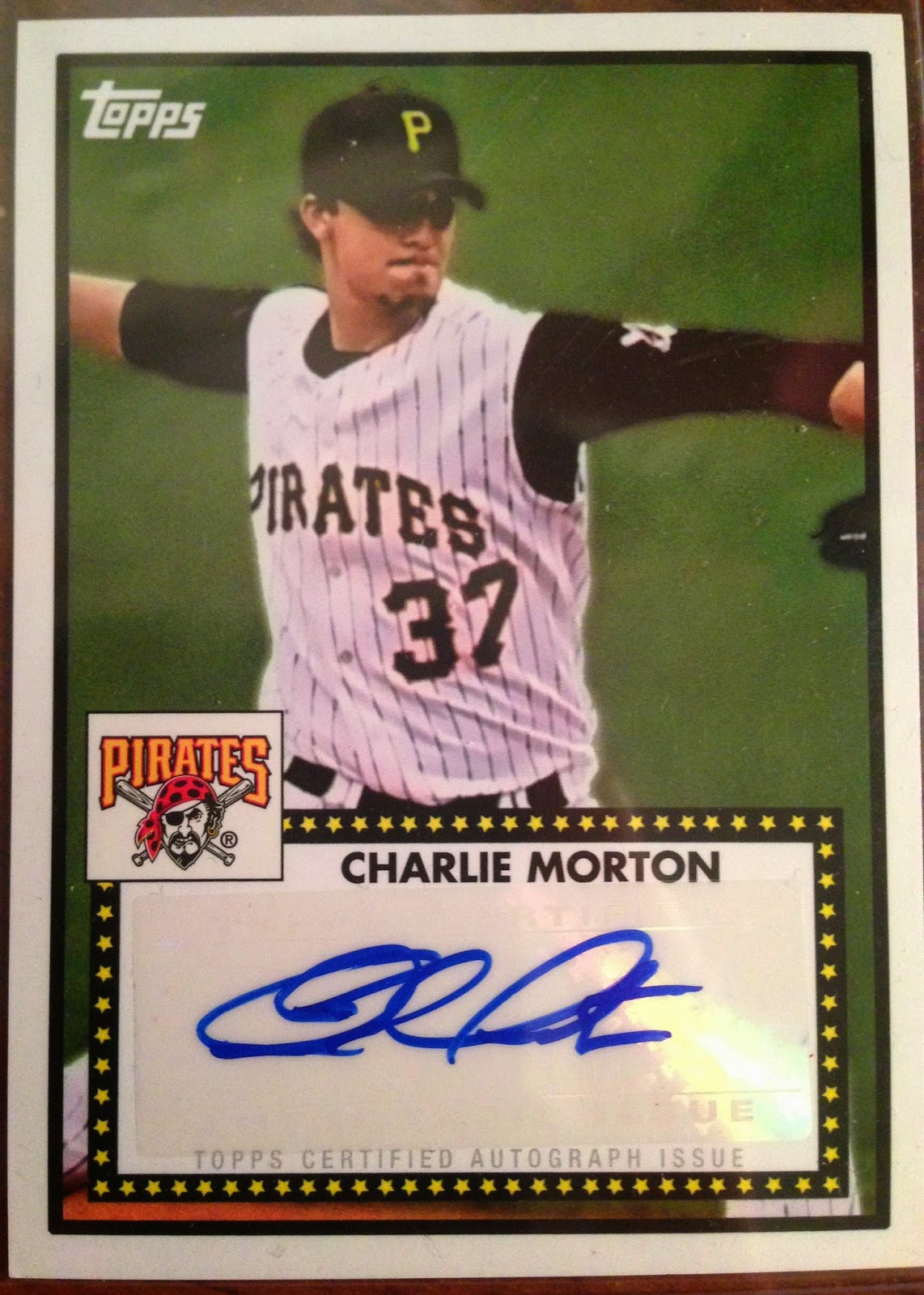 Lastly is a simple little Charlie Morton auto from 2011 Topps Lineage. I never dabbled with the set, but I really like this card. For a sticker, it's certainly not bad. This is the only certified autograph card that I've seen consistently on the market from Charlie. I was able to pick this up for $4 shipped.

Charlie's having a pretty rough year this year, as are most Pirates pitchers... and batters... and so on. They were able to pick up a nice 6-1 win over St. Louis this afternoon. Hopefully they can steal one from Adam Wainwright tomorrow and gain some momentum before heading to Baltimore to begin interleague play.

Good evening friends. I've finally gotten around to sorting all of my GQ from this year, and I was able to amass a Pirates team set from Judson's group break.

Speaking of that group break, it gave me a TON of dupes and extra trade bait. I had the Pirates and Red Sox, so you'll see a theme here. I also ripped a few hobby packs from my LCS. I've set aside all the cards I want. Here's what I don't: 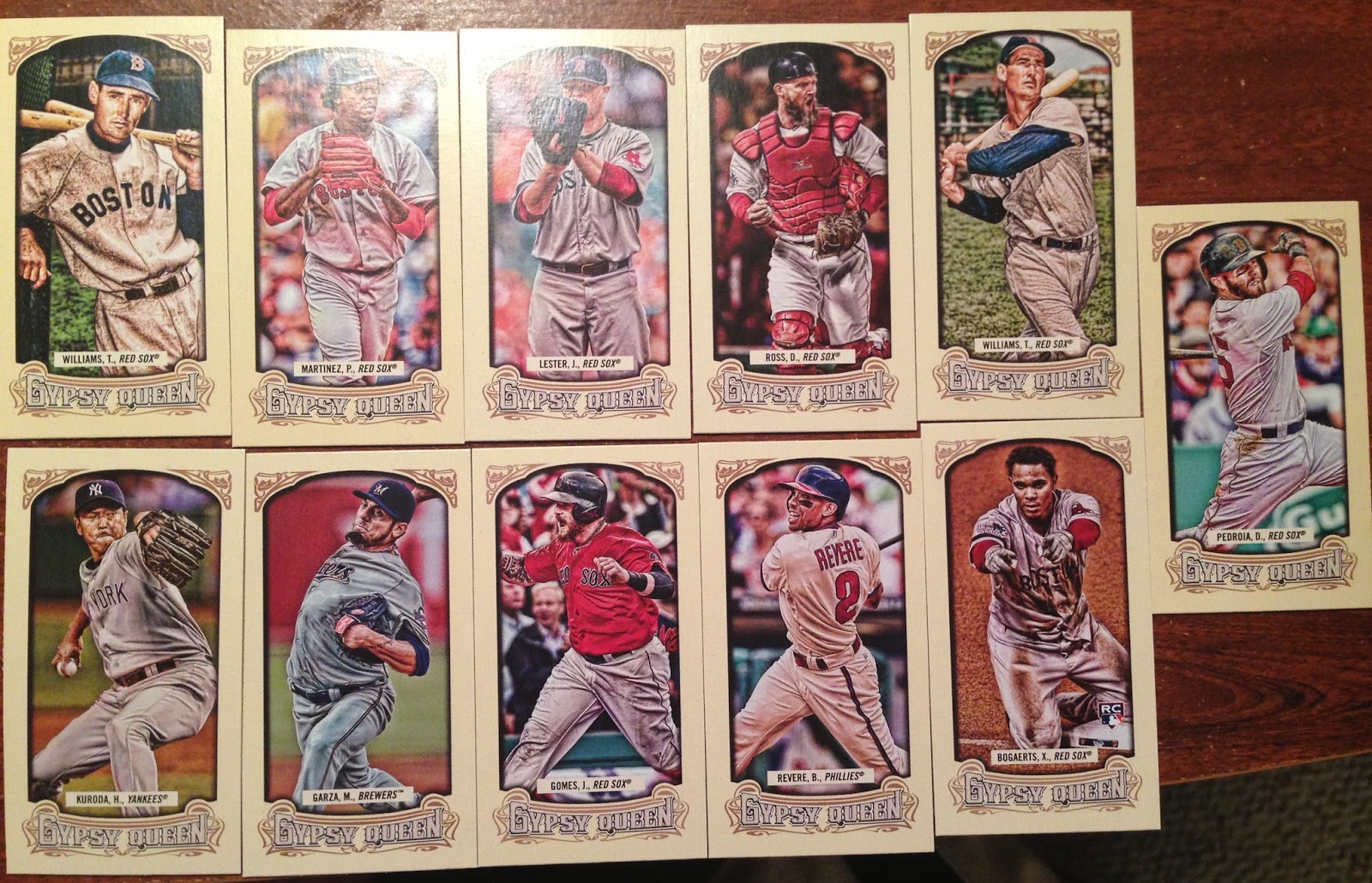 The mini's. Mostly Sox. There's a nice Ted Williams variation in there. 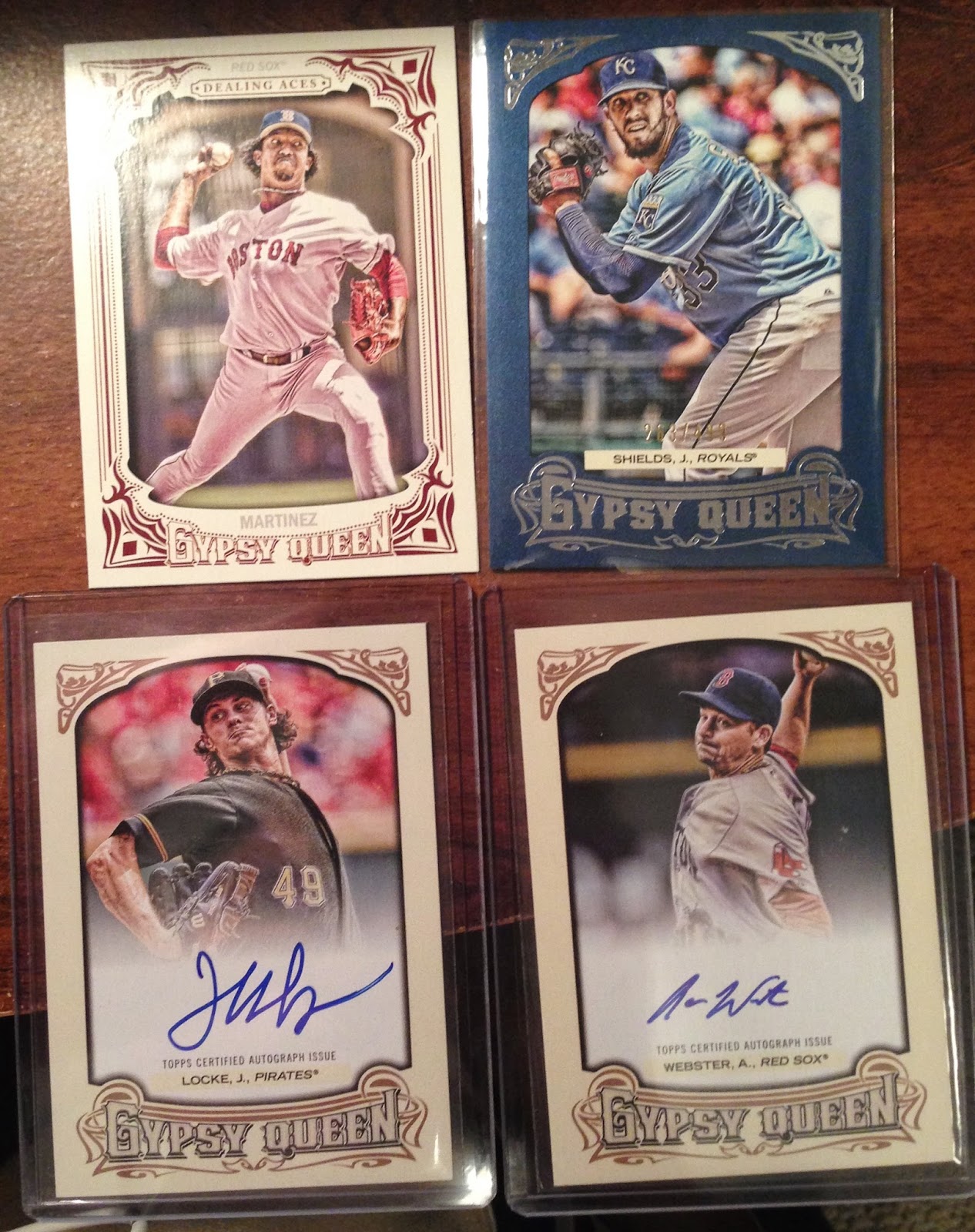 Judson actually pulled two Jeff Locke auto's, and I only need one. That Shields card looks sick with the blue border, /499.

Some inserts above. And more...

And lastly, the numbered mini's...

Nothing too crazy here, although I imagine that the Bogaerts RC holds some nice value.

So, let me know if you see anything you like! I also have TONS of base cards from Red Sox and Pirates (probably a few full teams sets). You can reach me, as always, at nsbell440@gmail.com.

Posted by The Bucs Stop Here at 2:24 PM No comments:

A big thank you to everyone who participated in my second ever contest!

This contest had less entries than my first, with exactly 40 entries - still a very nice number.

I'd also like to extend an even bigger thank you to those who promoted or "pimped" the contest on their blogs. I'm still quite new to the blogosphere and it means a lot to me that everyone is willing to spread the word. 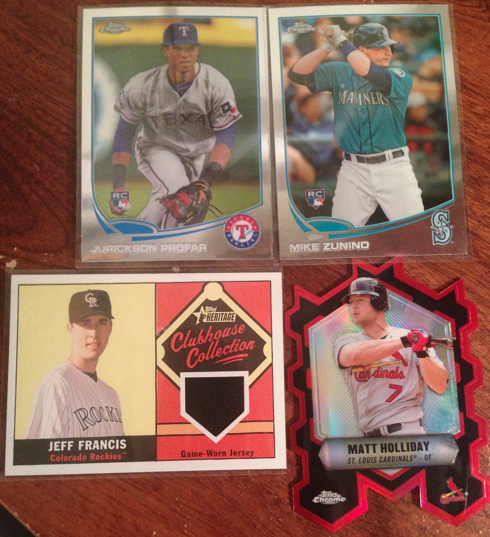 I threw all entries into random.org, and randomized 14 times as promised. Here are the results: 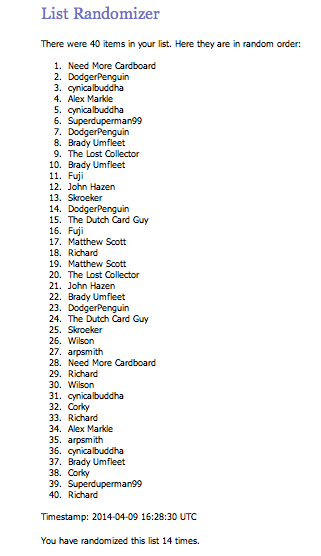 Congratulations to Andrew over at Need More Cardboard on the win! Andrew, shoot me your address at nsbell440@gmail.com. I should be able to get your cards out this week!

Thanks again to everyone for your participation. Overall, I received a good amount of positive feedback for a football card giveaway. That may be the subject of next months contest...

Yeah, yeah, I know... Opening Day was a week ago. But I'm slow,  and I haven't had a chance to get on here and write a post of this length!

If you recall, a week ago I posted my thoughts and predictions for the Pirates 2014 campaign. In that post, I only hit on the offensive starting lineup, and didn't mention anything about the pitching staff. So, I thought it would be appropriate to analyze the hurlers as well. 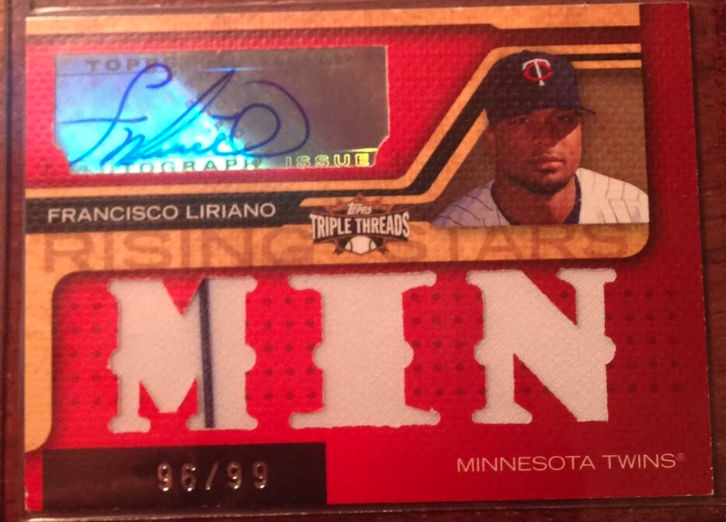 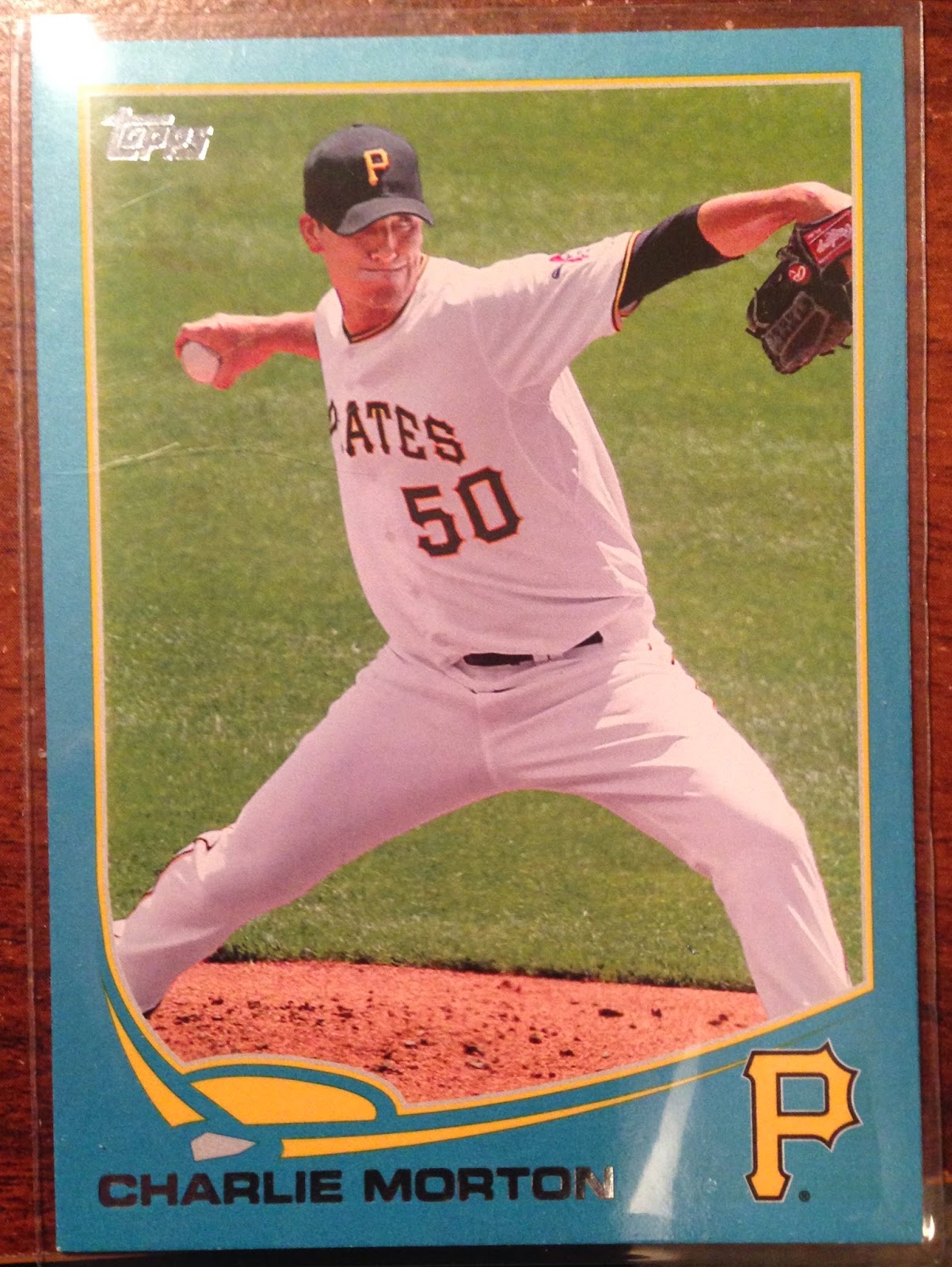 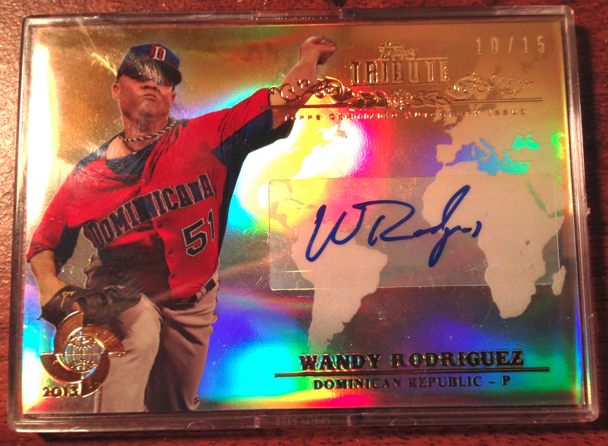 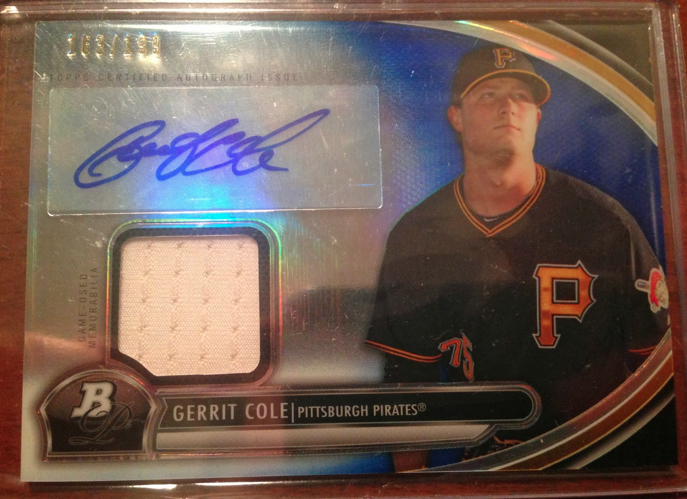 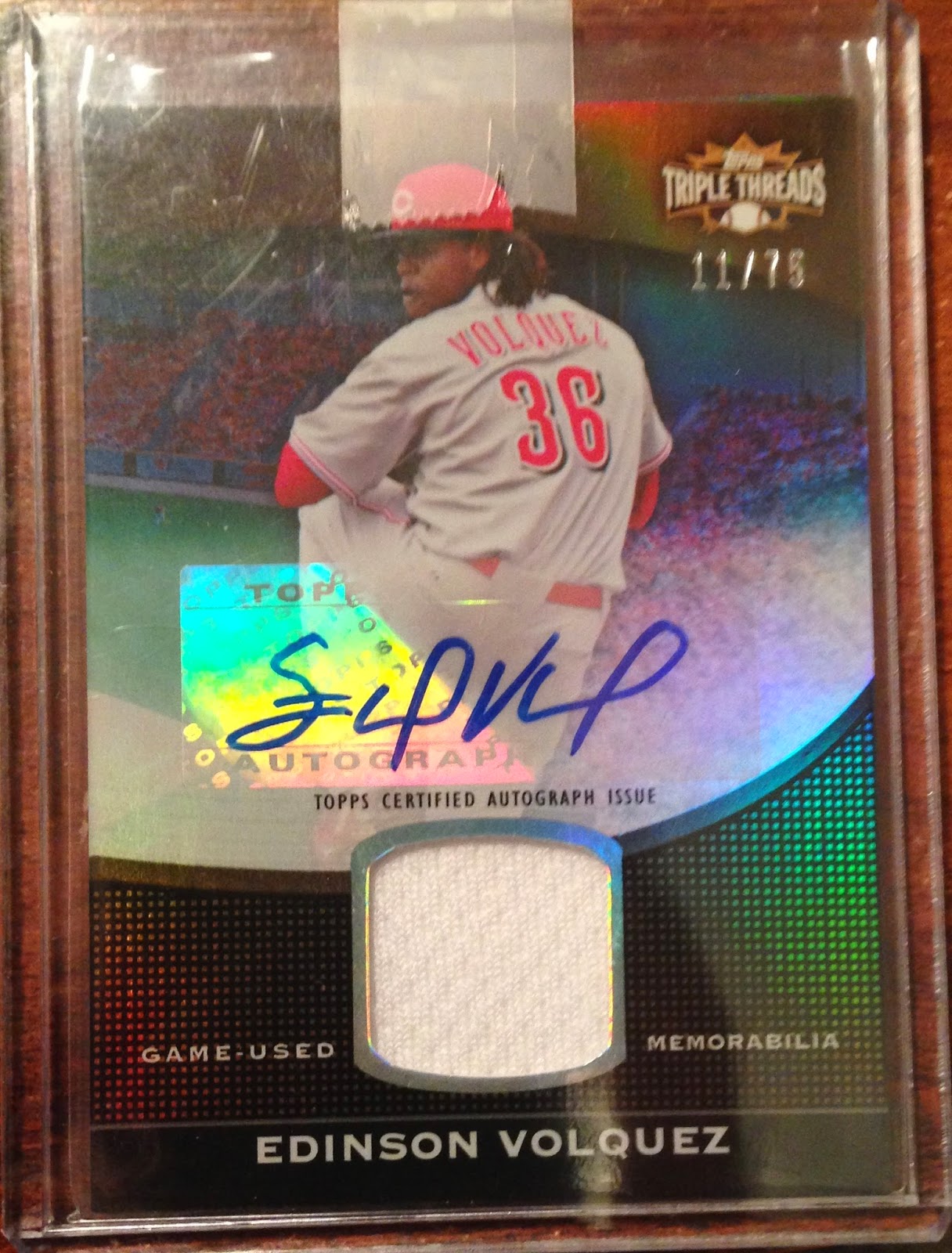 2013: IP: 170 1/3 Record: 9-12 ERA: 5.71 K: 116 WHIP: 1.67
2014 Projected stats: IP: 158 Record: 8-14 ERA: 5.29 K: 106 WHIP: 1.58
Comments: Please excuse that silly piece of tape that a previous collector felt was necessary. We all know how that goes. The Pirates seem to have a ton of faith in Volquez, hoping that the pitching coaches can turn him around like they did with Liriano. Unfortunately, I don't see it happening. I've seen this guy play for a while now, and he just can't get it under control. He was a very cheap signing, so he's low-risk in that sense. However... he kind of sucks... so pitching him once a week seems pretty high-risk to me. I pray that I'm wrong in my predictions and he turns out OK. If not, I pray that the Pirates dispose of him before he can put up the stats that I've projected above.

So there you have it. In my eyes, it should be a solid year for the pitching staff. There's no doubt that's some talent, but all of the pieces will need to fall into place perfectly if the Bucs will have a shot at the postseason.

One last thing: If you haven't already seen, I'm holding a contest with some nice prizes. Check out the link if you like free cards!

Thanks for reading.
Posted by The Bucs Stop Here at 3:22 PM 1 comment:

Good evening fellow bloggers, I've decided to run another contest! My last one was a pretty big success, so I'd like to continue running them monthly, ideally.

Here's what's up for grabs! 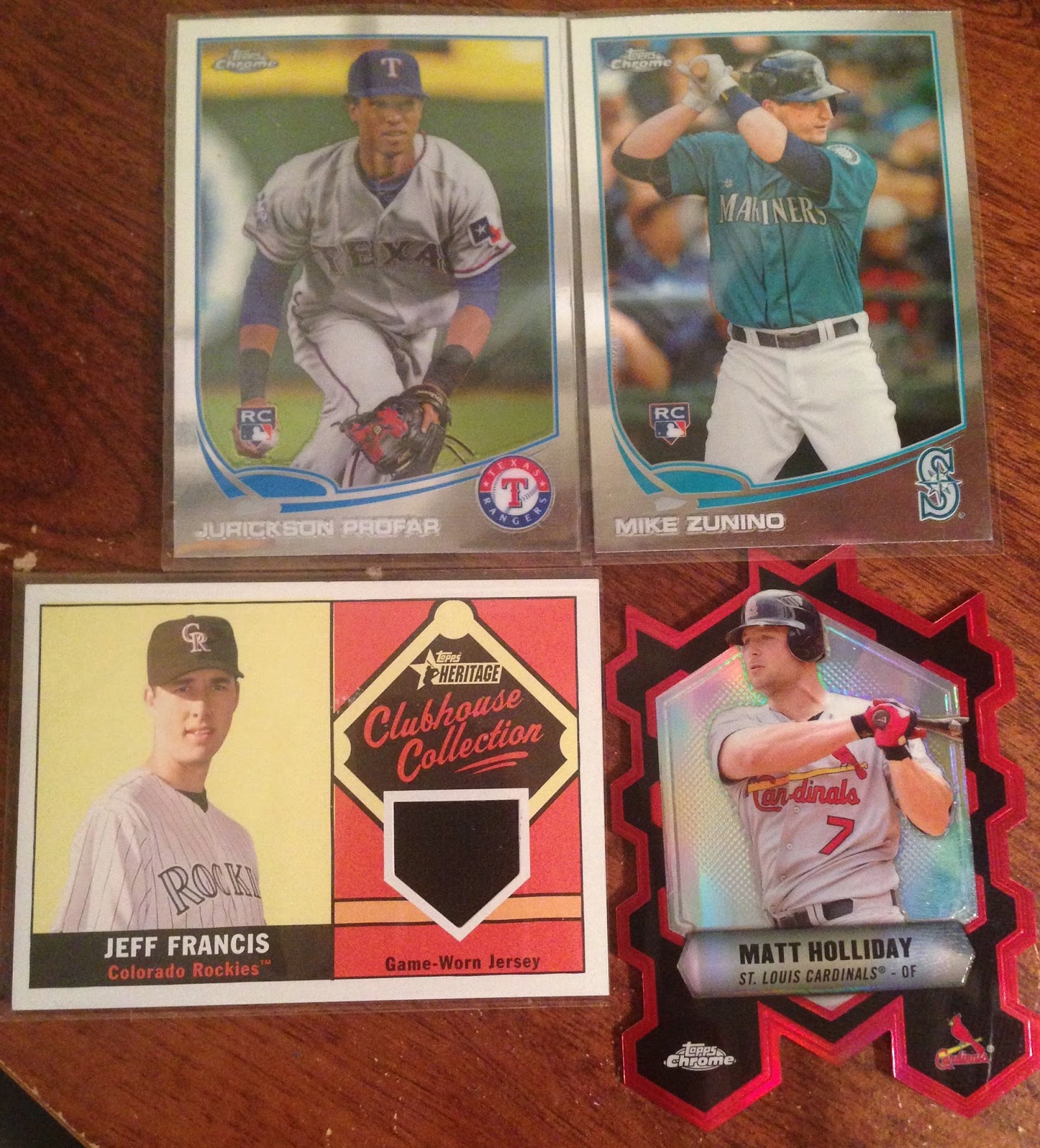 Quite the odd assortment, I know. A couple of nice rookies up top, as these two guys will have a legitimate chance to make an impact this year. Also a funky-looking die-cut insert of Matt Holliday and a Jeff Francis jersey relic from 2010 Heritage. Winner takes all!

Here are the guidelines:

1 Entry: In a comment, let me know who your favorite ACTIVE baseball player is, and why.
1 Entry: Also in your comment: Do you collect football cards, and would you enter a contest similar to this if the prizes were football cards?
2 Entries: Post about this contest on your blog. Please let me know if you've done so so I can cadd that your tally.

So, each participant can achieve a maximum of 4 entries. All entries will be tallied and randomized 14 times through random.org on Wednesday, April 9th. Whoever is in the #1 spot after all 14 randomizations wins!

Good luck, and thanks for participating!