The Pirates Don't Suck (Yet)

Baseball season is underway. Somehow - by the grace of god - the Pirates aren't doing nearly as poorly as expected. With this afternoon's win over the Twins, the Pirates have raised their record to 10-11. Pre-season projections had the team winning 60 games - so some quick math tells me that 10 wins in 21 games projects to 77 wins in 162 game season.
We will actually win 77 games? No shot. The rebuild is full swing, and we'll be sellers at the trade deadline. After we ship out some of our consistent role players for prospects (I'm looking at you Adam Frazier), I imagine August and September will be rough.
Regardless, this has been a fun start to the season, and I am elated to have baseball back on my television. To celebrate, let's check out some of my recent Pirates pickups: 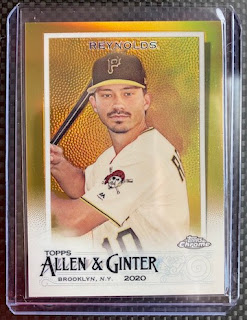 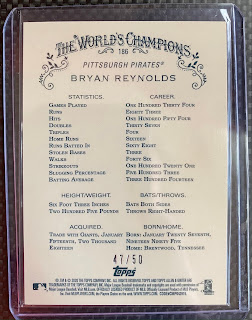 Bryan Reynolds - 2020 Topps Allen & Ginter Chrome Gold Refractor #/50
After a miserable 2020 campaign where he hit below the Mendoza line and looked like a shell of the player we saw in his rookie year, Bryan Reynolds is back to his old self. With this add, I'm now up to 38 unique Reynolds cards.  Not only was this a nice addition to my Reynolds PC, it's also another great add to my Pirates Gold Room. I know many collectors are experiencing "chrome fatigue" and aren't thrilled bout Ginter chrome. I didn't buy any boxes of it but I think this gold parallel is a beauty. 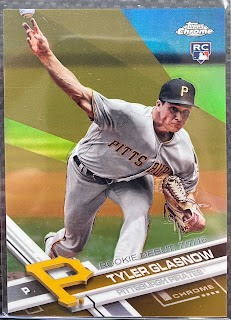 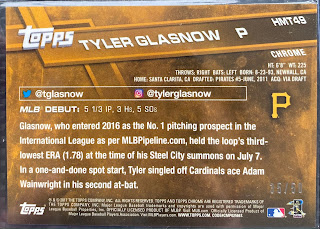 Tyler Glasnow - 2017 Topps Chrome Rookie Debut Gold Refractor #/50
Speaking of gold parallels,  I was able to add this Tyler Glasnow card to my old PC for a reasonable price. As he continues to dominate, I'm not sure how many more of his cards I'll be able to snag. 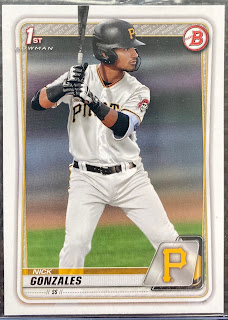 Nick Gonzales - 2020 Bowman Draft Paper
Nick Gonzales was the Pirates first round pick in last year's draft at #7 overall. He's a big time prospect, so collectors of all types are clinging to his cards. I was able to acquire this through a TCDB trade. This is my first Gonzales card and I hope it's the first of many. 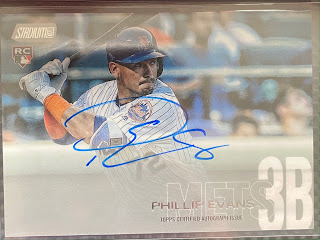 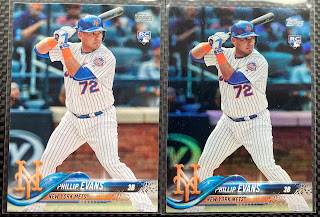 (L) Phillip Evans - 2018 Topps RC
(R) Phillips Evans - 2018 Topps Rainbow Foil RC
The Pirates have a handful of new faces in the everyday lineup, one of whom is Phillip Evans. Evans made a quick debut with the Mets in 2017 and 2018 but it only amounted to about 50 plate appearances. He spent all of 2019 in the minors before making his way back to the show with the Pirates last year. Across four seasons, he's still only played in 63 games, making him a widely unknown name. I was able to trade for all three of the cards above on TCDB. 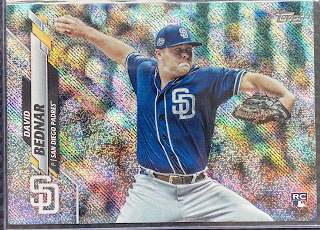 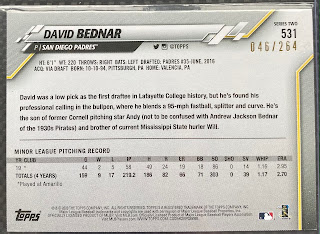 David Bednar - 2020 Topps Foilboard Rookie #/264
While this certainly isn't the flashiest of my recent pickups, it might be my favorite. Bednar, a Pittsburgh native, was part of the trade return for Joe Musgrove. Bednar isn't a big name but he's pitched very well for the Pirates and has earned himself a look in high leverage situations. He's a Pittsburgh native and has quickly become a fan favorite. The foilboard parallels were added exclusively to Wal-Mart complete sets, and they're one of the prettier parallel finishes that I've seen. 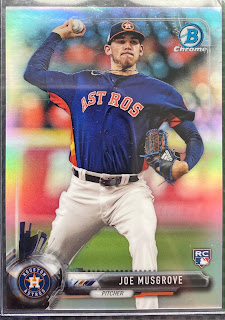 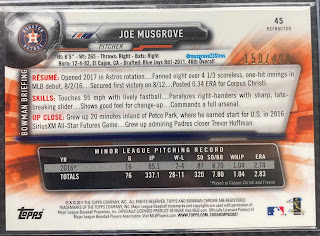 Joe Musgrove - 2018 Bowman Chrome RC Refractor #/500
When Joe Musgrove was dealt to San Diego over the winter, I let go of several of my Musgrove cards, including most of my autographs. I had too many, and his cards were fetching a decent price right after the trade.... Fast forward to last week when he threw the Padres first ever no hitter. I had immediate seller's remorse. Nostalgia washed over me, and I hopped on eBay to see if I could find a cheap rookie. For $6, this is what I came up with. It's nice to have a shiny Big Joe rookie back in my collection.
Thanks for stopping by.
Posted by The Bucs Stop Here at 2:03 PM