And I'm happy he's on my team. For the first time in a long time the Steelers have a respectful defense. This is due to a variety of factors. Bud Dupree is emerging as a viable starter, T.J. Watt continues to look like a perennial Pro-Bowler, and the secondary has quietly done their part.

Upon hearing of the trade back in mid-September I was immediately looking to add a Minkah auto to my collection. Considering that he's only one year removed from being drafted #11 overall and has been a consistently good pro, I was pleasantly surprised to see that his autos were pretty affordable.

I'm always hunting for numbered parallels so I was hoping find one for a decent price. The highest number out there for 2018 Prizm is #/199. This is for red parallels which were running $15+ and that's just too steep for me.

I settled for a Pink parallel for less than $10. Not numbered, but it's some variety past just the silver base card so I'll take it! 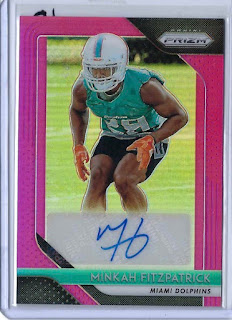 While we're here, I'll show off a Pirates PC pickup. Bryan reynolds had an incredible breakout season in 2019. His cards were few and far between until 2019 Topps Update. I'm still looking for his base cards (both Update and Chrome Update) and I'll wait to get those through trade. 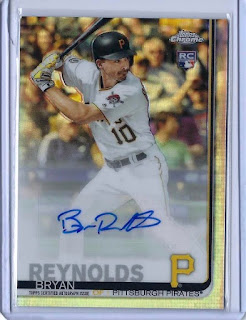 I can wait for the base cards, but I couldn't wait any longer to grab an auto. This is my second auto of his and the first one in a Pirates uniform. This cards also goes against a few of my collecting principles: It's not numbered, and it's a sticker auto. But this is the first Reynolds autograph card as a Pirate and I just couldn't wait.

I have been itching to get my hands on some of these boxes ever since they began to emerge a few weeks ago. Topps Chrome Update is a retail exclusive to Target - which theoretically would be great for me. There's a Target about a mile from my home and it's on the way to and from work. They do a great job of stocking cards there as well, so I felt like my chances would be decent. I stopped in often but it was to no avail.

I started to lose hope. How many times can I stop in a Target for baseball cards? In addition to stopping in to the store, I also stayed tuned to the Target App. I finally got lucky and some boxes popped up late last week. Not only that, they were on sale for $17.99 each. Being a RedCard member gives me free 2-day shipping. I wasn't planning on grabbing more than a box or two, but the killer price inspired me. I pulled the trigger on three, totaling $55 delivered to my door.

I'm not going to go pack-by-pack here. Just the highlights. I only hit one Pirate - #87 Josh Bell ASG. I was really hoping to hit #29 Bryan Reynolds. I'd love to trade for it if anyone has one. 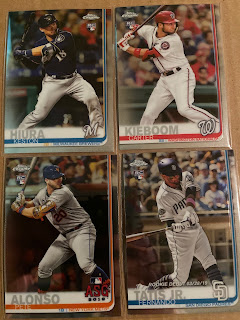 I was fortunate and hit on most of the top rookies. #38 Keston Hiura, #22 Carter Kieboom, #86 Pete Alonso ASG, and #54 Fernando Tatis Jr. Rookie Debut. 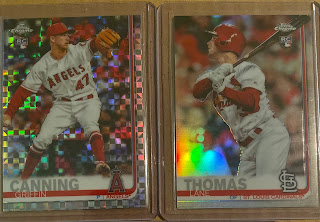 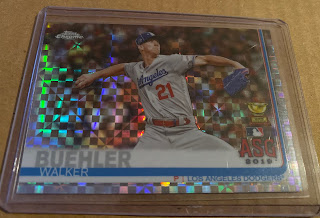 I also this pulled beauty. Walker Buehler x-fractor #/199. I really love this card. Buehler is a super likable guy and already one of the best pitchers in the game. Add in the ASG graphic and the All-Star Rookie graphic - icing on the cake!

Overall, this was tons of fun. I'm big on Update and I'm a chrome guy so this is one my favorite releases of the year. I really love that refractors and x-fractors are serial numbered. I'd rather pull one of these for a decent player than a no-name auto. Lots of great stuff to stash away to re-visit in a few years.
Posted by The Bucs Stop Here at 5:01 PM 6 comments:

I should clarify – my first 1/1 that isn’t a printing plate. Printing plates are great, but I’ve been hoping to own a card with that pretty gold 1/1 stamp. Thanks to 2019 Topps Archives Signature Series (Retired Player), the time has finally come.

Now, we know that Topps Archives Signature Series is essentially manufacturing as many 1/1s as they like. All cards are encased buybacks. They have the player sign an original card, they stamp it 1/1, throw it in a case, and stuff it in a “Hobby Box” and charge $40. I’m not saying this card isn’t a true one of one – technically it is – there just happens to be a few dozen other one of one’s from the same set. In fact, there are 15 other 2019 TASS A.J. Burnett 1/1’s on eBay. Seven active and eight sold. However, out of those 15, only three had him in a Pirates jersey.

Alright, I’m done ragging on Signature Series. Let’s look at the bright side: This is a really cool way to create some unique cards that turn out to be pretty affordable. I purchased this card for less than the cost of a box, and I didn’t have to roll the dice and risk ending up with a CoCo Crisp or Mike Lieberthal auto. So that’s a win.

A.J. only spent three seasons with the Pirates so there aren’t a ton of Burnett cards out there where he’s in Pirates jersey, and none look better than his 2013 Allen & Ginter Card. When it comes to on-card autos, I’m a firm believer that no card is better than A&G. They were my go-to back in my TTM days. The white background usually sets up for a beautiful signature, and that’s definitely the case here. The blue ink looks fantastic and I love that Burnett includes his number 34 in his signature.

I’m really excited to add this to my collection! 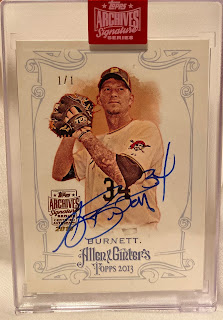 Earlier this week, Topps stirred up some news by partnering with a company called StockX to bring a new product offer to baseball card collectors: Bowman Chrome X. In this post, I’ll try my best to break down what it is, how it worked, and I’ll also share my thoughts at the end.

The Product: Bowman Chrome X – What is it? 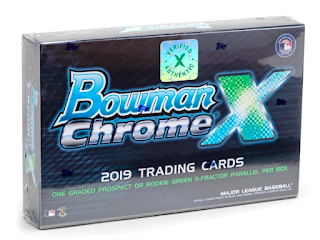 Box Chrome X is essentially a “hobby box” that contains one baseball card. All cards are:

OK. Now we’ve got the product down. Now, how were they sold? This is where it gets interesting. Bowman Chrome X was offered through a website called StockX, who sold the product through an IPO (Initial Public Offering). This model is loosely based off the stock market when a company “goes public” - when a company goes from a privately held company to publicly-traded company. The IPO gives investors the chance to be the first to buy stock.

So how does this come into play with Bowman Chrome X? How does a StockX IPO Work?

If you’re still confused on the process, I highly recommend checking out this 90-second YouTube video from StockX that explains it very well. 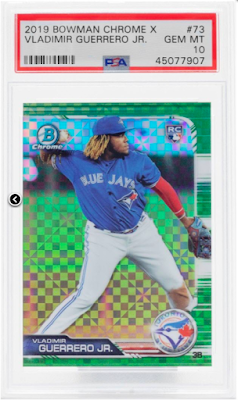 OK – Now we’ve got this down. So what happened?

1) I tried to get involved. I’ll admit it. I bit! This a brand new concept, and it was something I couldn’t help but get involved with. I like Chrome and shiny new things… so I thought I’d give it a spin. I put in a bid for one box and one case, hoping that I could throw in a low-ball offer on each and get involved at a decent price. For better or worse, my bids were under the clearing price. I didn’t miss the box price by a ton but I was way under on the case price. No Bowman Chrome X for me.

After seeing the clearing prices, I’m glad I’m not spending that kind of money on 1 or 5 baseball cards. And I guess that's the beauty of this - I wouldn't be comfortable paying $50/box plus shipping... and, I'm not paying that! I submitted my bid, and my bid wasn't high enough.

2) I'm not sure I trust the results and the clearing price. It's interesting. If the clearing prices are truly $50 and $300, those seem to be strangely round numbers, no? If you have over 1,100 people bid on something, and the 1,100 highest bidder is the one that sets the price - don't you figure it would be some obscure number? Like $48.78? I have a hard time believing that they happened to land cleanly on $50 and $300.

Furthermore, I've read rumors on Twitter that StockX has notified box winners that they can buy more boxes. But... If there were 1,100 boxes, and over 2,100 bids, how the heck are there more boxes for sale?

To add another layer, now the StockX Bowman X webpage is still showing that there were 1,013 bids. So, wouldn't that mean that the clearing price should be at whatever #1,013 bid? And since that's the lowest bid, we know that bid is the guy who put in $.01. 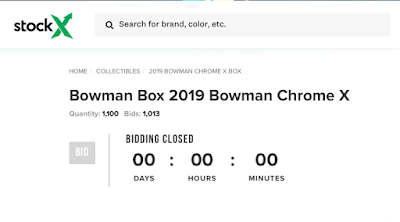 3) The IPO concept is definitely cool - if it's legit. As stated above, I certainly question the validity of this. But if it's actually a legit offering, it's really cool in the sense that it empowers consumers to set the market price.

4) I will be watching these cards closely when they hit the market. And you know that won't take long. There are already boxes and cases listed on eBay for ridiculous prices, and thankfully, none of them have sold yet. Eventually they will sell, but I'm hoping they don't sell too high above the clearing price. This would only encourage flippers. As for the boxes that are opened - you can bank on the Vlad Jr. and Bichette PSA 10s going for a good price. Beyond that, I'm interested to see what these cards sell for.

If you've made it this far, I'm SUPER curious to hear your thoughts. Did you consider getting on the Bowman X action? Did you bid? How do you feel about this type of product offering?