The Return of: He Was A Pirate?

When I launched this blog back in 2013 under a different name, I began segment called "He Was A Pirate?" which I had a lot of fun writing. I've been back to blogging pretty consistently since July and I still feel committed. And hey, baseball was supposed to start today! It feels like a good time to bring this back.

The inspiration here is quite simple. The Pirates, like all MLB teams, experience a multitude of transactions throughout the year. And, you know, since it's the Pirates... no one really knows or cares about those moves.

As a Pirates fan growing up in New York it was rare that I would come across anyone who shared my love for the black and gold. My Yankee-supporting counterparts were never aware of the frequent changes occurring a few hundred miles west in Pittsburgh. Oftentimes during friendly baseball-themed conversation, the question “He was a Pirate?” would arise. I’ve decided to honor this ever-occuring inquiry on my blog.

The posts are be sequentially numbered. Each post features one former Pirate who stint in the Steel City. Some will be somewhat obvious, and some will come as big surprises. There will be stars, there will be Joe-Schmo’s, and everything in-between. I will, of course, have at least one card from my PC to represent each player.

Today's feature is a decorated pitcher that has a place in Pirates history, but he's much better known for his 17-year tenure with the Red Sox. The story is a good one. 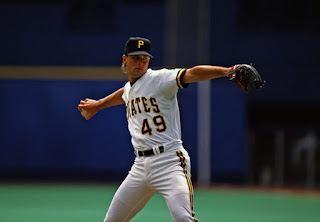 Tim Wakefield was drafted in the 8th round of the 1988 Draft by the Pittsburgh Pirates. He was drafted as a first baseman out of Florida Tech, where he set a number of home run records. After being told by a Pirates scout that he would never make it past Double-A as an infielder, he learned how to throw a knuckleball and began pitching in Single-A. He was effective and began to progress through the minor leagues.

Fast forward to July 31, 1992. A 25 year old Tim Wakefield makes his MLB Debut, where he throws a 146-pitch, 10 strikeout complete game shut-out against the Cardinals. The Pirates won 1-0. The win improved the Pirates record to 55-48, and with Wakefield's help (he went 8-1 during the stretch), they went on to win 96 games and the NL Central. 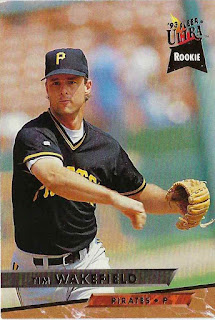 All Pirates fans - and many baseball fans - remember the 1992 NLCS where the Pirates lost to the Braves in dramatic fashion. That playoff appearance was a turning point for the franchise. For the next 20 years the Pirates would finish each season under .500 and miss the playoffs. What most baseball fans don't remember is that a rookie Tim Wakefield pitched both Game Three and Game Six of that series. In both games he went a full nine innings, out-dueled Tom Glavine, and got the win. How's that for your first season?

Turns out the 1992 season was Wakefield's prime as Pirate. In 1993, he struggled at the Major League Level. He spent most of the year in the minors. 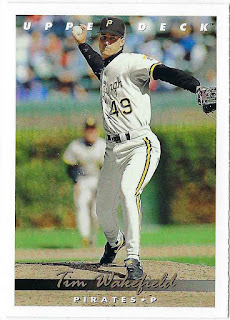 He spent all of 1994 in the minors, and was eventually cut by the Pirates at the beginning of the 1995 season. A week later he signed with the Boston Red Sox and was assigned to Triple-A Pawtucket. Legend has it that he worked with Phil Niekro on his knuckleball while in the minors. Due to an injury to Rodger Clemens, the 28 year old Tim Wakefield made his Red Sox debut - just a month after being cut by the Pirates. In his first 17 games with the Sox, he complied a record of 14-1 with a 1.65 ERA. Talk about a hot start. 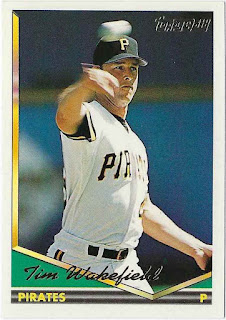 The rest, as they say, is history. Wakefield went on to have a long an successful career. He appeared in an All-Star game, won two World Series, and was an 8-time Roberto Clemente award nominee and one-time winner.

As for the cards, I don't have anything too special. I only own three cards - all base cards. The Fleer Ultra Rookie is my favorite. I do love the photography on all of them. I imagine it's way easier to photograph a knuckleballer than any other type of pitcher. An interesting note is that Wakefield wore #49 with the Pirates - the same number he wore with the Red Sox. It's a very unique number and is clearly meaningful to him. I wasn't able to find any backstory behind that but I'm curious.

Thanks for reading this edition of "He Was A Pirate?", many more to come!
Posted by The Bucs Stop Here at 1:09 PM