In my ongoing mission to bulk up my Pirates PC, I've been browsing eBay quite often. Last week, was able to grab two beautiful cards of two keystone Buccos. As my Pirates collection has grown, it seems that it's becoming more and more autographed based. As long as it continues to be an affordable practice, I'd love to snag at least one auto of each significant member of the Pirates roster. Here are my two newest additions (you can also view my entire PC HERE): 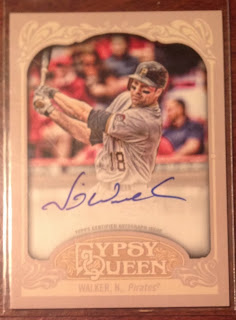 The first card I purchased is a Neil Walker Auto from 2012 Topps GQ. Everything about this card is great: On card, blue ink, great pose. The price was right too, just under $10 shipped. Neil's going to have to starting putting up some consistently good numbers if the Pirates want to have a stable offense. In other words, they offense will go as he goes. 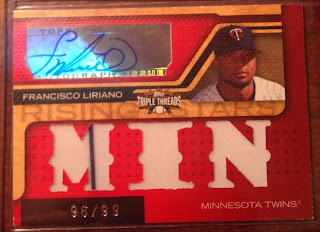 The other card I grabbed is a 2008 Topps Triple Threads Francisco Liriano Autograph/Jersey. I'm not a huge fan of Topps' silver in-card autograph stickers, but an auto's an auto. The centering of the sticker on this particular card is also very poor. Thankfully the jersey isn't just plain white. Topps was kind enough to give me one single pinstripe... how kind of you, Topps.

This was also just under $10 shipped. Here's to hoping Frank the Tank can deliver us another all-star caliber season. Hopefully Topps will produce some more cards with Frankie in a Pirates jersery. Until then, I'll gladly settle for this.

Posted by The Bucs Stop Here at 9:48 AM No comments:

It's glorious. I'd never tried to chase a set of inserts before, but for some reason this set really appealed to me. I think my favorite aspect of the set is the player selection; lots hall of famers, future hall of famers, and of course... three Pirates.

I picture myself skimming through this set ten years from now and being overwhelmed with great baseball memories- Mike Trout's huge splash onto the scene, Cutch's MVP year, Manny Machado's Web Gem of the year, and so on.

And the best part is, this is all pre-Puig- an era of baseball which I enjoyed. It could be the last set of Puig-free inserts that Topps ever produces.

A huge thanks to everyone was helped me out with this set! Its great to sit back and enjoy these, finally.

Posted by The Bucs Stop Here at 3:17 PM No comments:

PC Upgrades from the Dime Box

Not the literal Dime Box, but my new pal Nick over at the blog Dime Boxes -- The Low-End Baseball Card Collector's Journey.

Nick enjoys the little things about cardboard collecting, like finding gems for just a dime. Luckily, Nick was in need of some parallels, and I had a ton lying around (and still do). After a good deal of bartering, we were able to settle on a trade. I sent him a small of stack of parallels and set needs, and he sent me some sick Pirates cards off of his trade list. 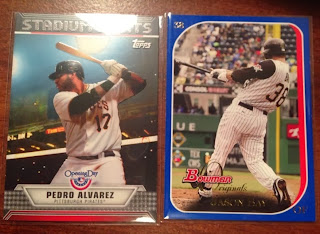 First off is a really nice Pedro Alvarez insert from 2011 Topps Opening Day. This set of inserts, "Stadium Lights," attempts to highlight the feats that players achieve in night games.

Which makes this one of the most ironic cards of all time, at least for this season. Here are Pedro's night/day splits for the 2013 season (day games on top):

Hense the nickname he earned this year, "Daydro."

Next to Pedro is a nice Jason Bay card from 2006 Bowman Originals. Blue Parallel numbered to 250. JB's up there on my all-time Pirate favs. 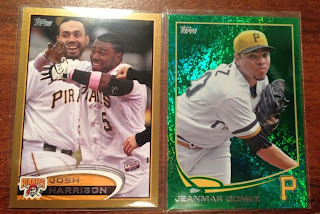 Continuing the parallel theme, we've got a gold beauty of Josh Harrison from 2012 Topps. And look who it is in the background! Daydro! He's even smiling, which is quite a rarity. Not a knock on him at all, I believe he's just an intense guy on the field.

The Jeanmar Gomez emerald is fresh out of 2013 Update. Jeanmar is at the top of the pile for the most underrated player on the Pirates this year. He started, relieved, and closed games.. and didn't give up many runs doing so. 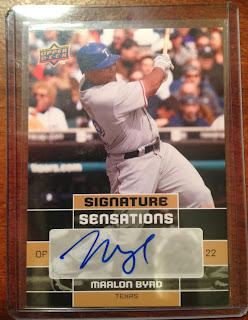 Last but certainly not least is a 2010 UD Marlon Byrd auto. This card won't knock anyone's socks off, but neither will Marlon Byrd. I've been itching to grab an auto of his ever since joining the Buccos, so Nick came in clutch for me here. I'm sad to see him go across the state, but I will always remember his outstanding play on the North Shore, however brief it was.

Thanks again to Nick, and thanks for reading!

Posted by The Bucs Stop Here at 2:33 PM No comments:

Not just any stuff, but 5 packs of early 90's football cardboard. Hard to resist, right? One of them even comes with a piece of gum that's over two decades old!!

I received these as a throw-in in an eBay purchase. I have very little interest in these types of cards, but I know there are some people out there that can offer a warm, loving home!

First come, first serve. Just drop me a comment or an e-mail.

Thanks for reading,
Nate 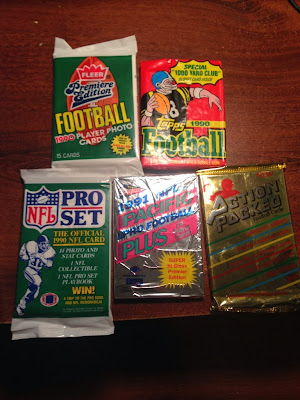 Topps Comes Through With a Redemption!

It seems that every collector has a nightmare story about a Topps redemption. Luckily, I've avoided pulling redemptions, except for two. One I sold on eBay immediately, and one I decided to redeem.

I pulled the redemption card out of Bowman platinum blaster over the summer. It only took about 3 months for them to get it to me. I can't complain!

I had never heard of Mike O'Neill, but after some reading, he seems like an interesting character. And because of that, I think I'll hang onto this one for a while! I hope to see him in the big leagues soon. 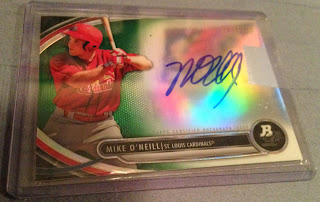 Thanks for reading,
Nate

Posted by The Bucs Stop Here at 6:58 PM No comments:

Trade Bait! Come and get it!

Hello all, I've finally got around to updating my Trade Bait page. I've been buying a ton of Topps baseball products lately, and everything's on the new page. Check it out HERE!

If you see anything you like, shoot me an email at nsbell440@gmail.com

Thanks for reading!
Posted by The Bucs Stop Here at 3:15 PM No comments:

Parallels have become a fixture in card collecting. Every collector has an opinion on them. In general, I'm a big fan of parallels, although they have gotten out of hand over the past few years in terms of abundance. Here's an example of parallels creating some gorgeous cards: 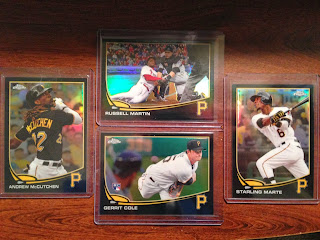 After I heard that 2013 Topps Chrome included black parallels numbered to 100, I could only imagine how awesome the Pirates cards would look, and I had to put a team set together. They did not disappoint. I was able to snag each of these off of eBay for decent prices. They're rare enough to have some value, but not so rare that they're unobtainable.

Sometimes parallels can look very odd. When the border colors match the team colors, it just looks amazing.
Posted by The Bucs Stop Here at 10:27 AM No comments: