Call me a horder. You'd be spot on. I used to have a fetish for jersey cards. I still really like them, but they're not as exciting as they used to be. The bottom line here is that I have too many that don't fit anywhere into my collections. I also have some autographs that I have no use for.

Here's what I'm hoping. I'm hoping that there are some collectors out there that can give these cards a good home. If you see anything here that you really like, please drop a comment or shoot me an e-mail at nsbell440@gmail.com. If you're looking for details about any of the cards (some are numbered on the back and such), I'd be happy to fill you in.

Many of these cards carry some good value. I'm not just passing out charity, but I am generous trader. Again: If you see something you like, please reach out! Everything here is available.

These images will also be posted onto my trade bait page.

I have tons of basketball and football memorabilia cards as well; stay tuned for posts on those! 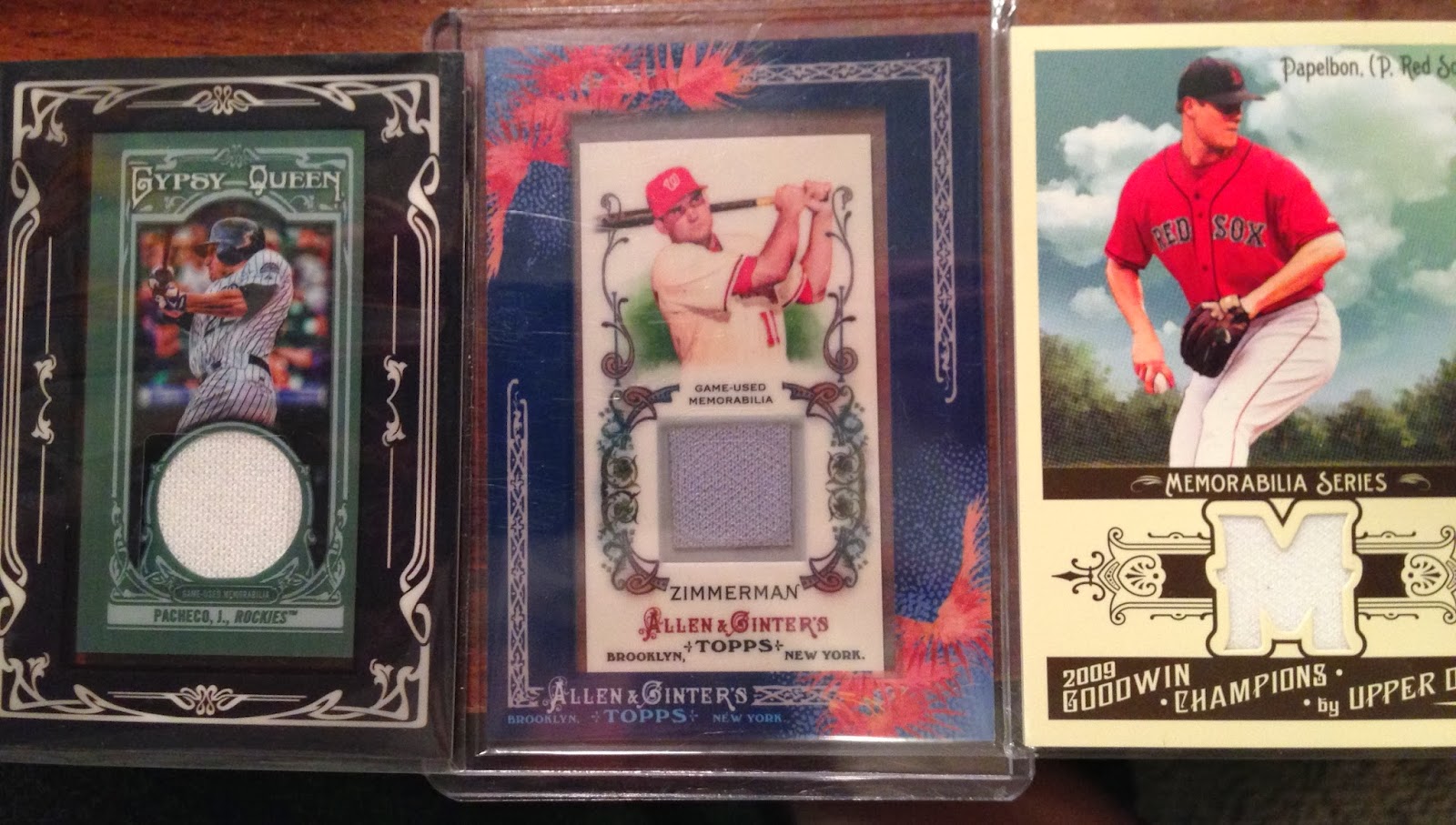 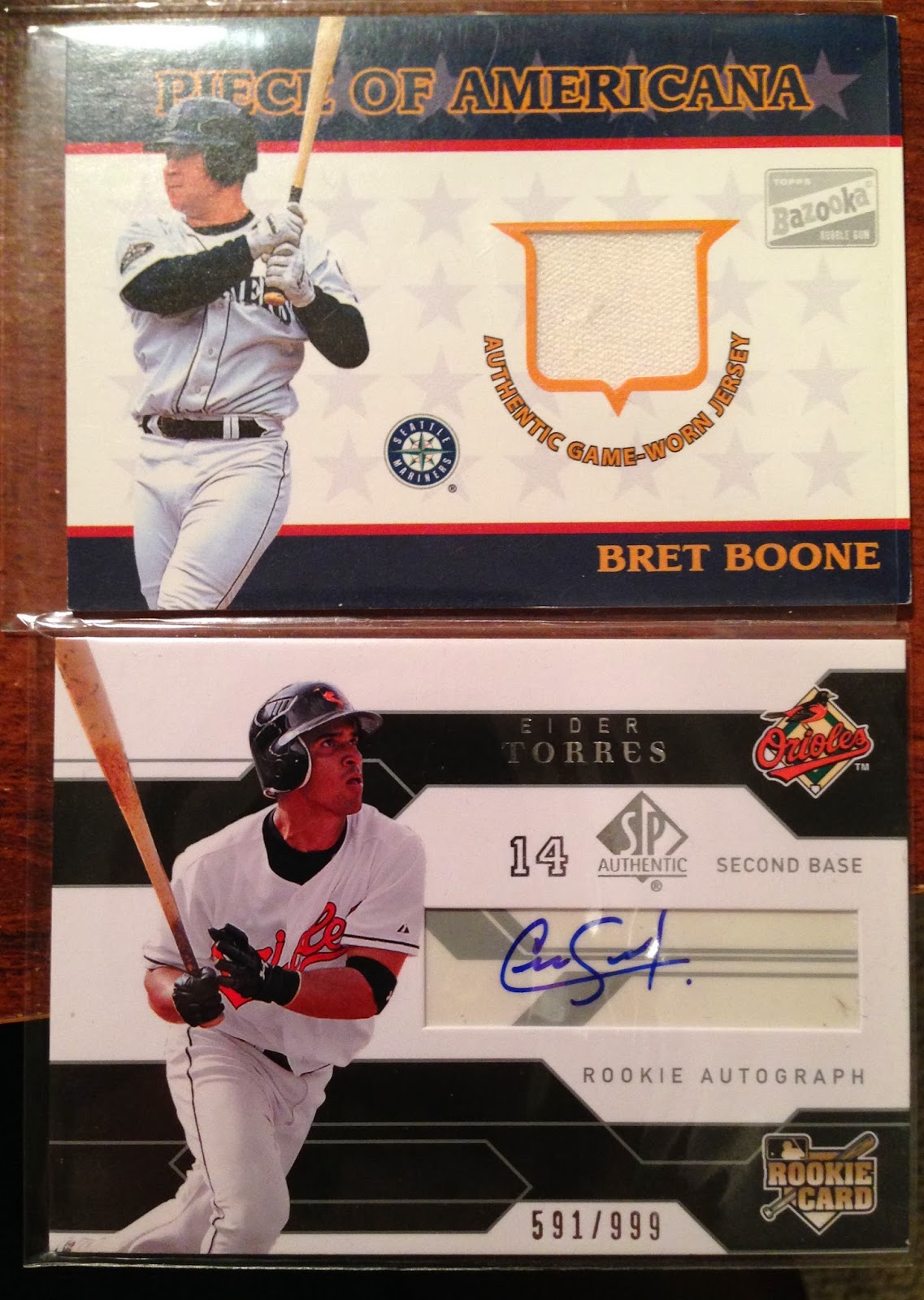 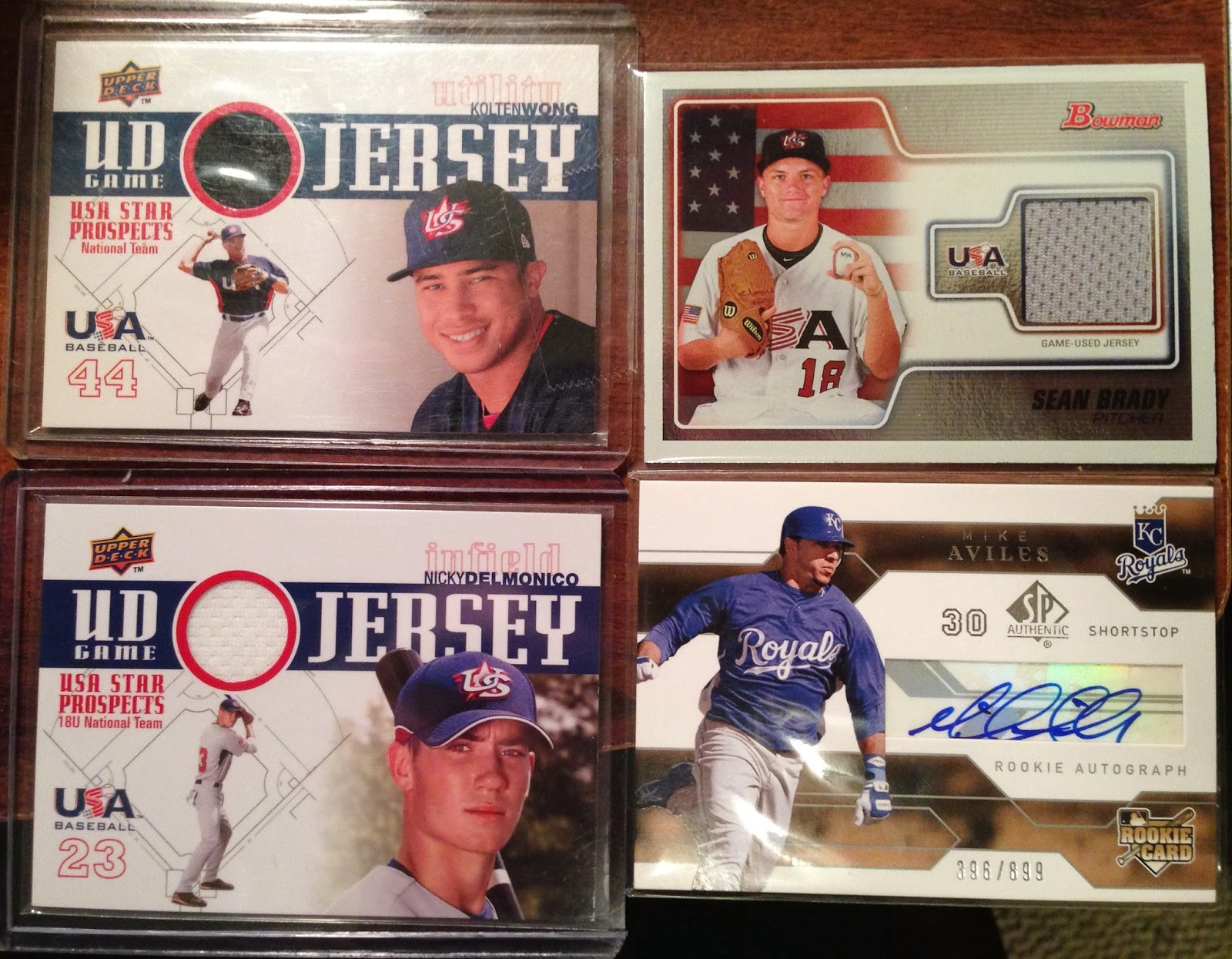 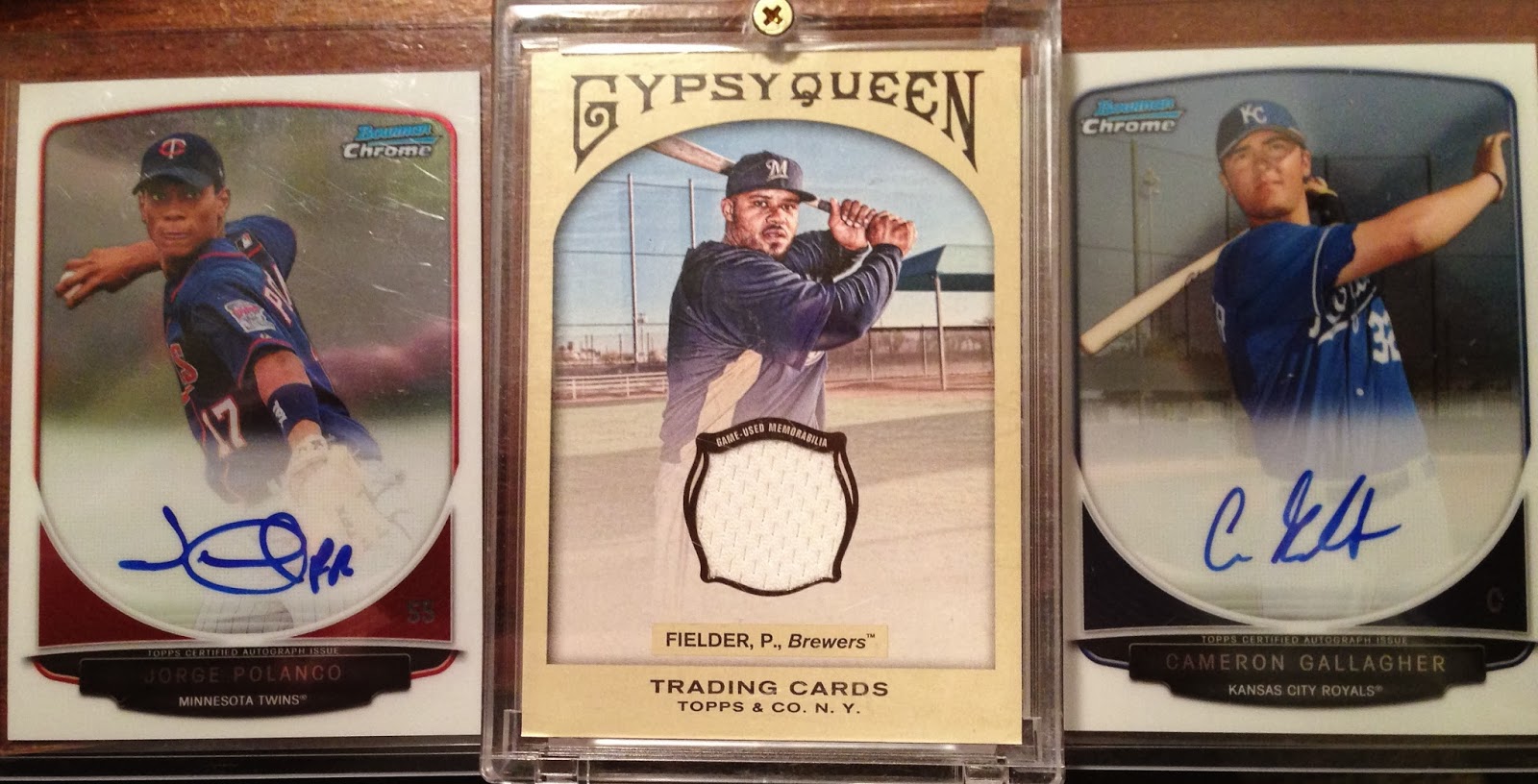 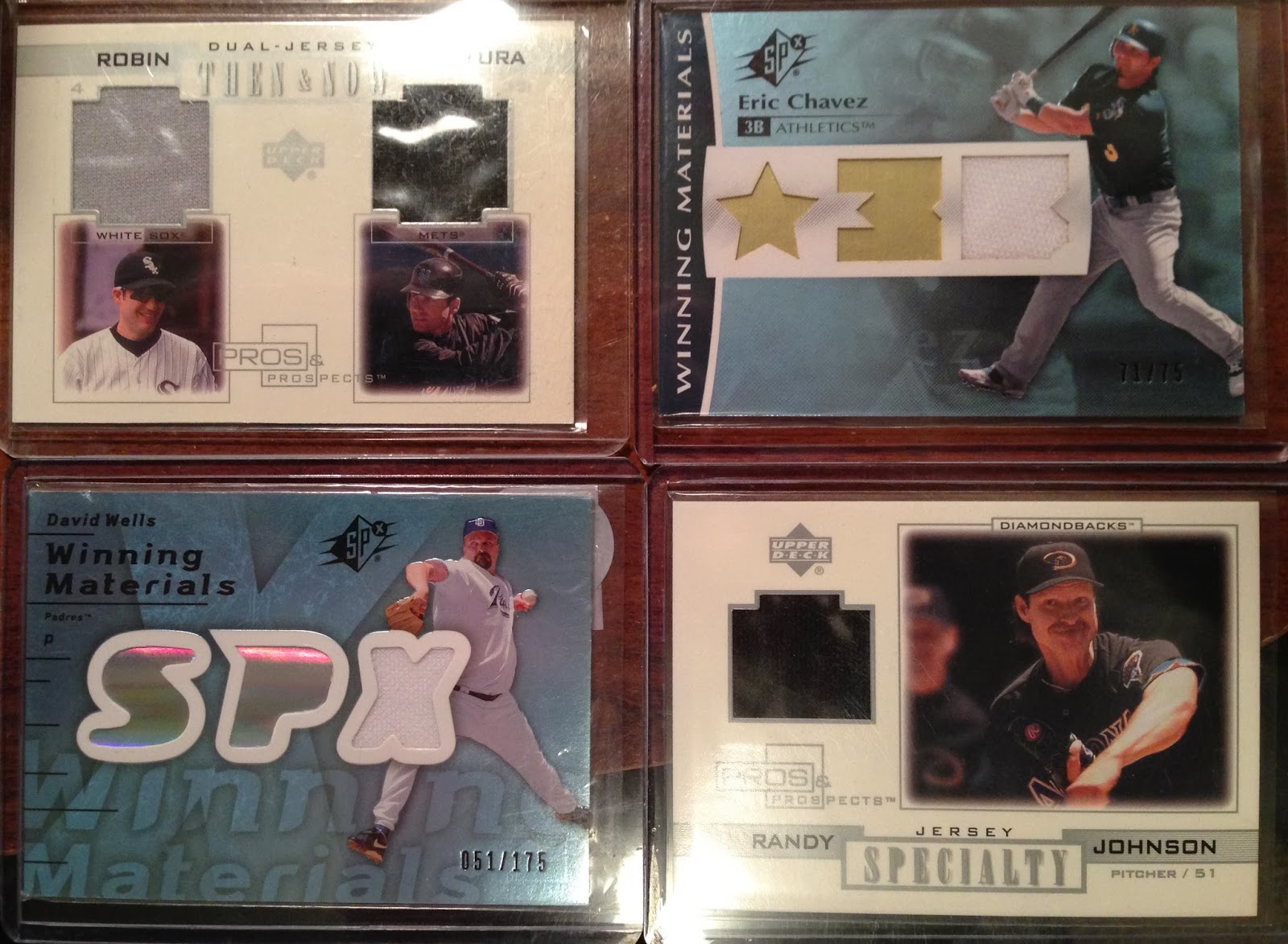 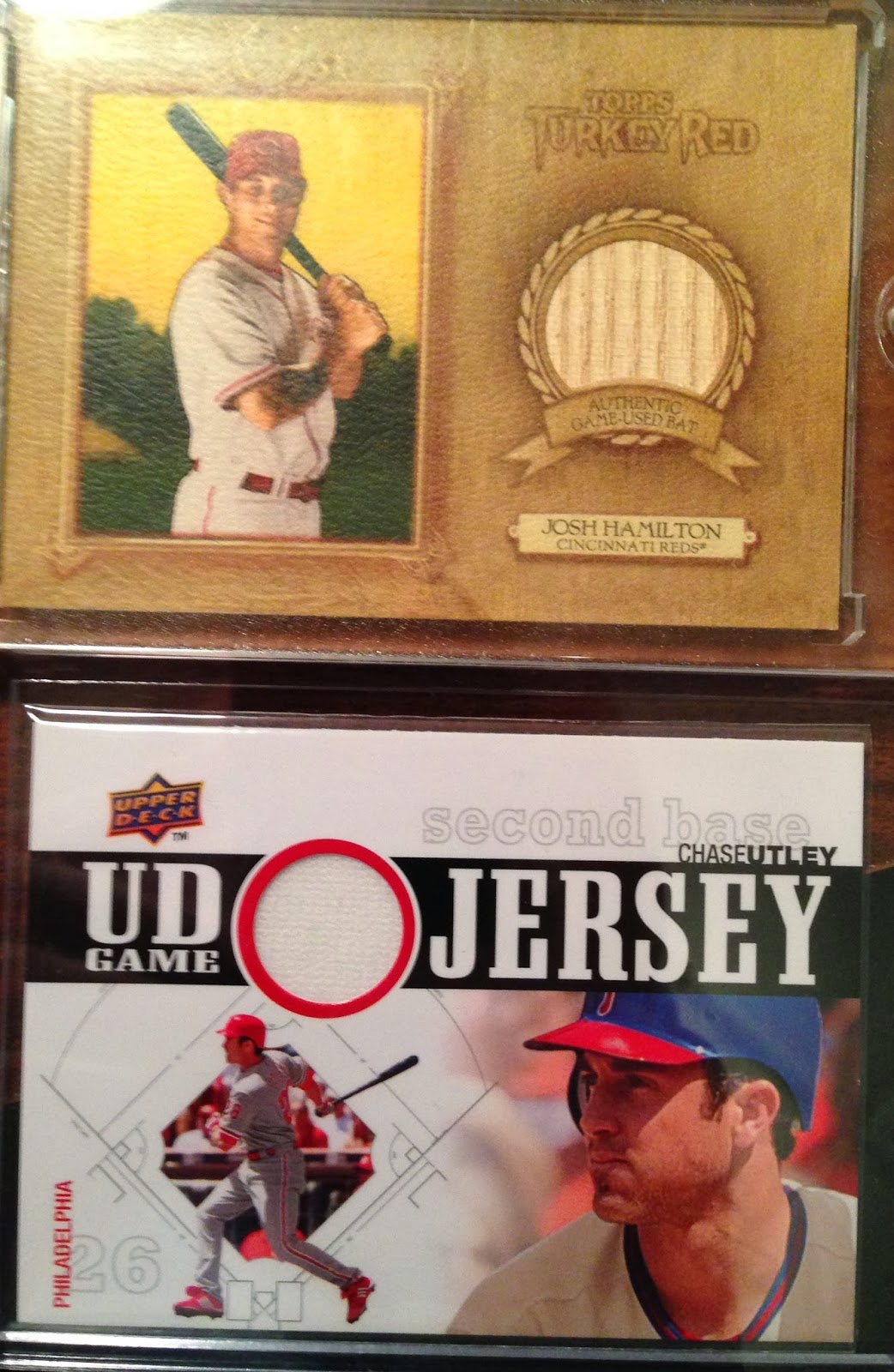 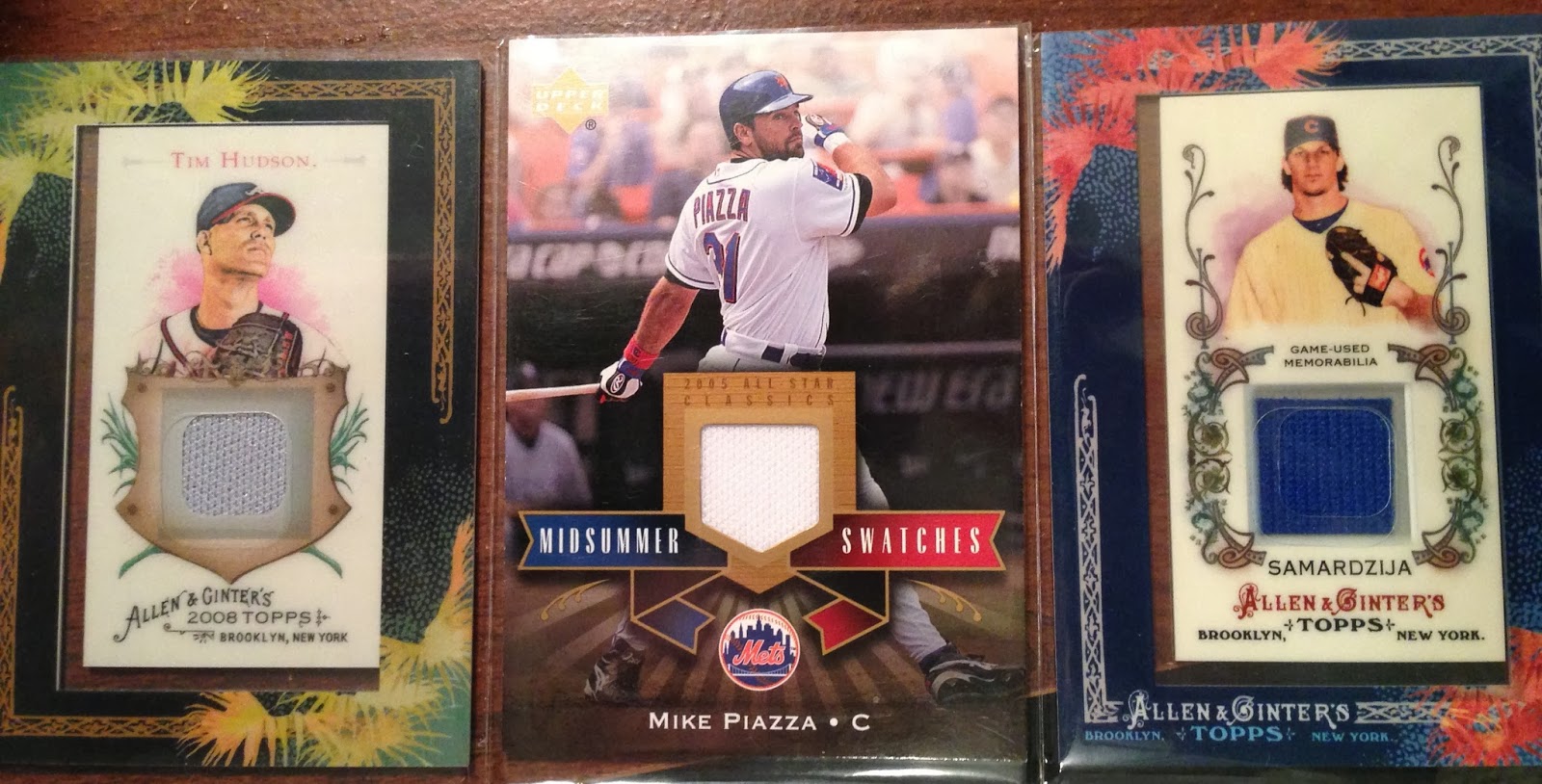 Catching Up On Some Recent Trades

I've been getting a ton of mail lately, far too much to keep up with on the blog- but here are this week's highlights: 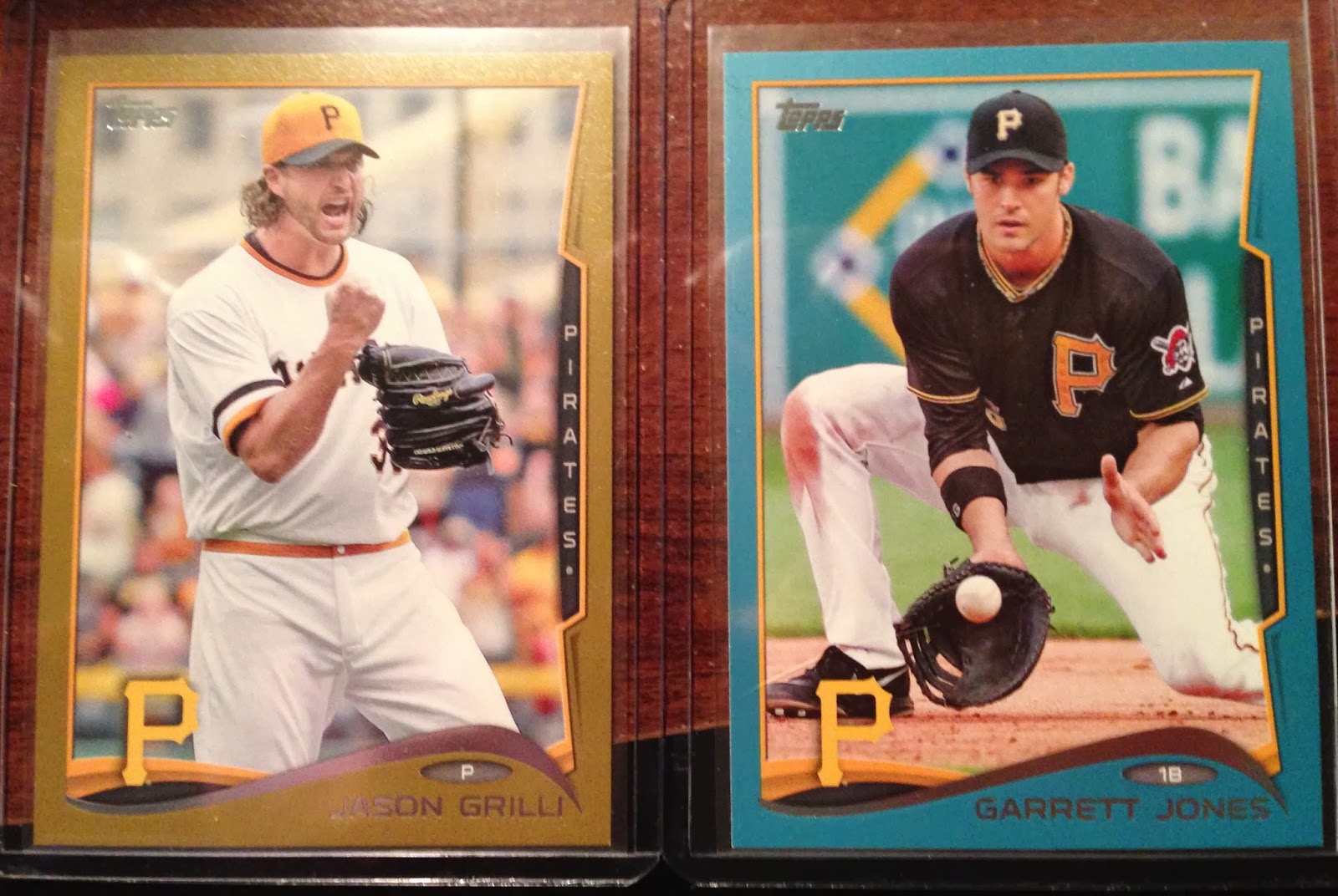 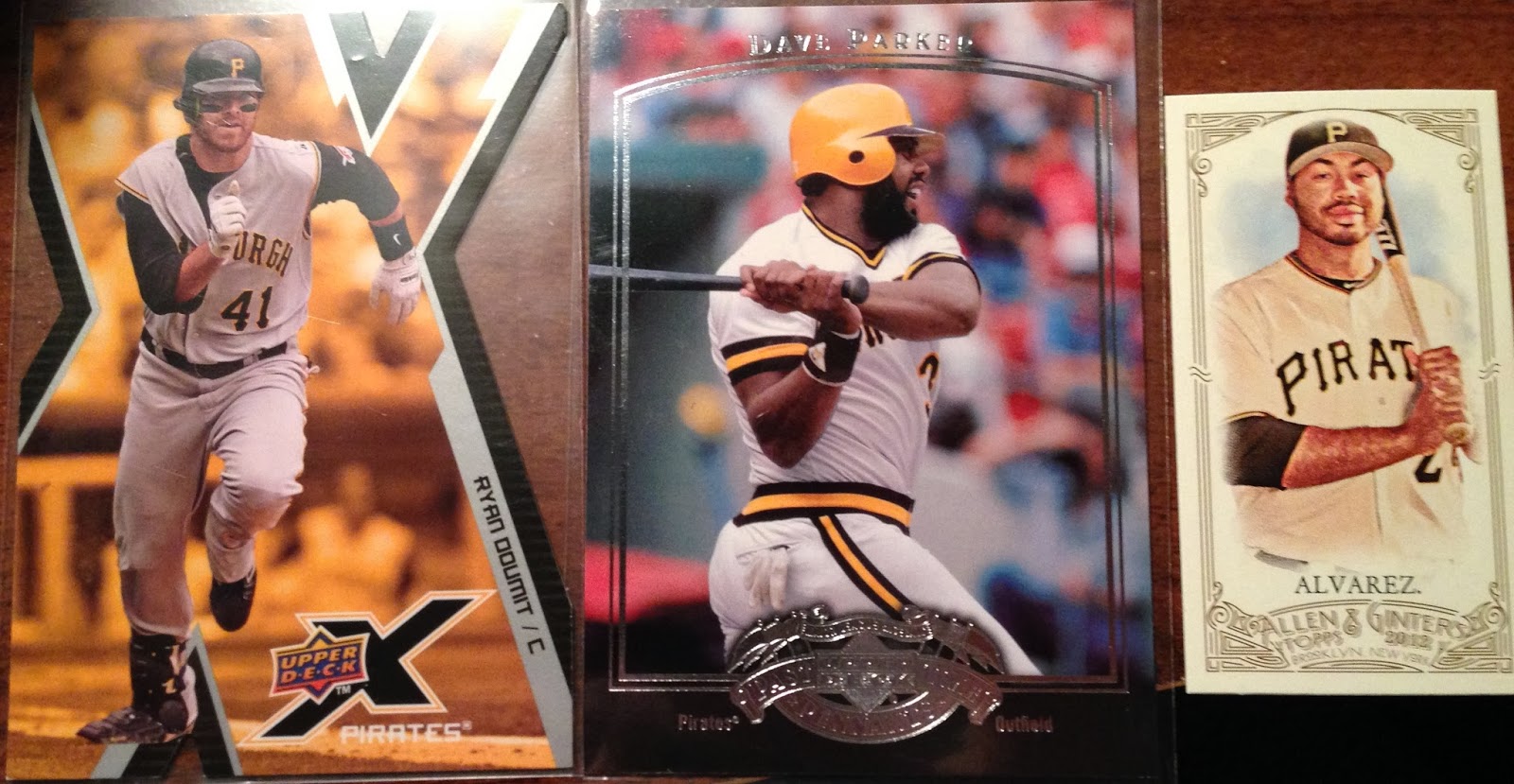 All five of the cards above are from CynicalBuddha over at Collector's Crack. He's a huge baseball fan,  and has some really interesting collections. Definitely worth checking out his blog!

I was very pleased with everything he sent me, particularly the Grilli gold border. I love Grilli's S1 picture- It sums him up well. Buddha was kind enough to throw in a bunch of other cards. Next up, an auto... 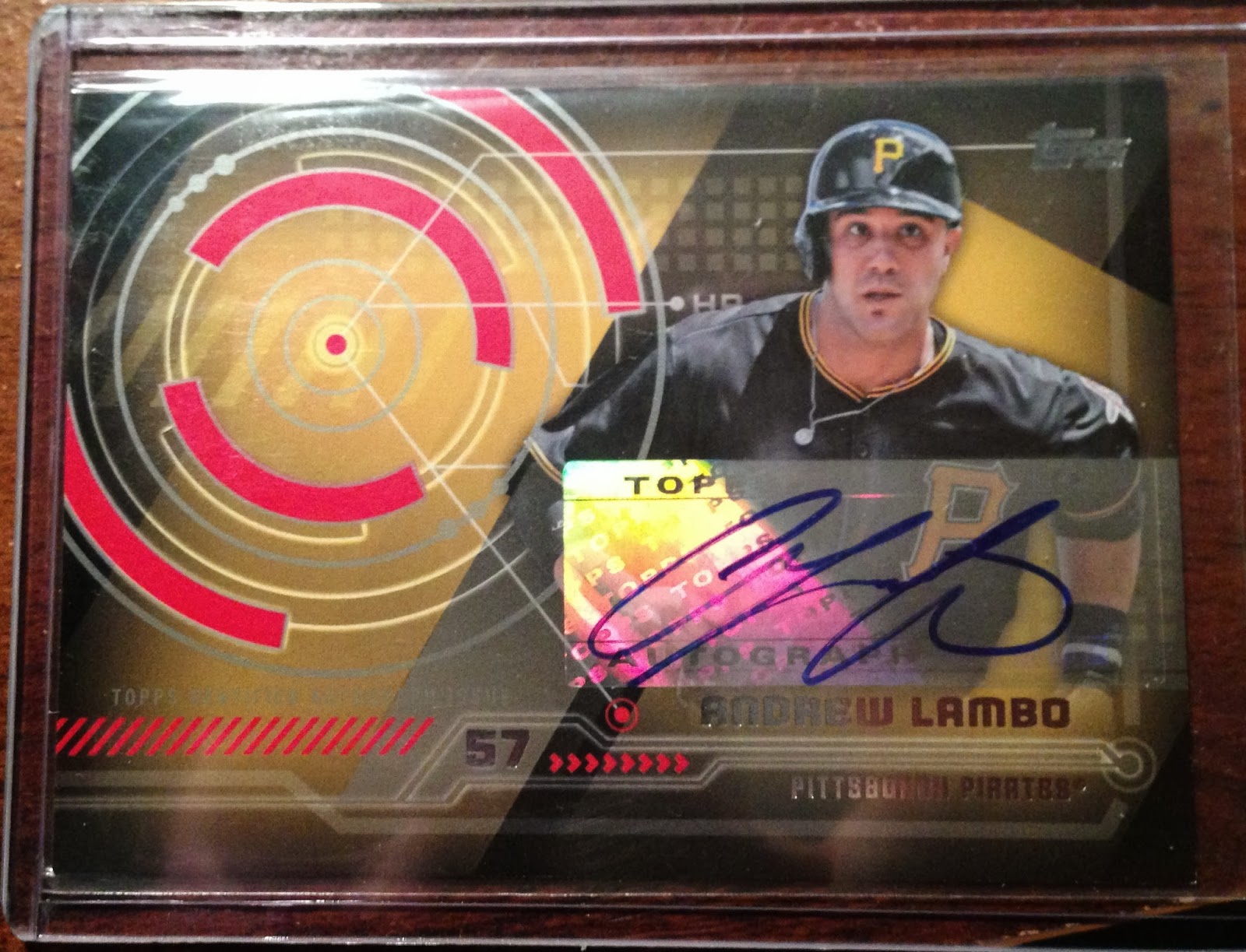 Sent to me by Mr. Judson Meeks over at My Cardboard Habit. If you don't know Judson, you probably blog on a different planet. Judson runs a very entertaining blog, and he's an incredibly generous trader. I think I've established myself as Judson's "Pirate Guy," which I am more than OK with.

I'm not in love with the design of these Trajectory auto cards, but I am in love with a rookie auto from a current Pirate. My thoughts on Lambo are pretty well documented.

Thanks to both of my trading partners, and thanks to you for reading!

Posted by The Bucs Stop Here at 9:12 PM No comments:

My Dormant Blog Comes Alive with a Topps Redemption!

Yes you read that correctly. I received a redemption from Topps! It's really possible- more on that to follow.

We all have our reasons for our week long blogging hiatuses. My reasons are no different than any you've heard or written about- work, school, significant other, other hobbies- etc. Therefore I will not bore you with monotonous details of my unexciting life.

Although I haven't been writing, I've been actively reading and pursuing upgrades to my Pirates PC. As I've mentioned in previous posts, one of my unwritten goals for the year is to acquire a certified autograph of every Pirates player, however realistic that may be. I've made some awesome progress in the past few weeks: 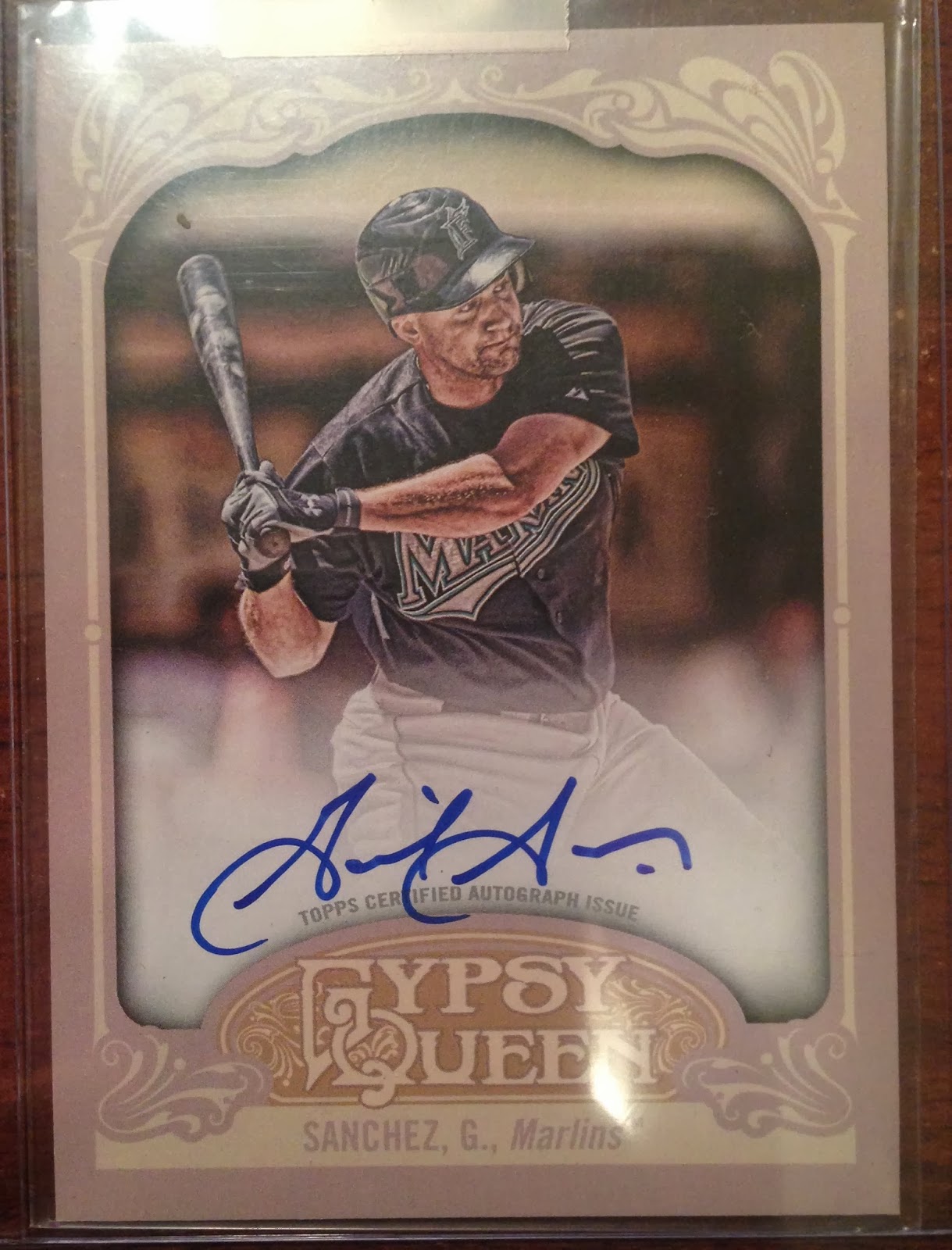 First up is Gaby Sanchez from 2012 Topps GQ. I've mentioned before that I'm a big fan of Gypsy Queen auto's, mostly based on design. The blue ink on card and the fading area for the auto looks really smooth. I got this bad boy for under $5 shipped.

Gaby is currently the only true first baseman on the Pirates roster with a major league contract. He's a guy who mashes lefties (.333 in 102 AB in '13) but can't see the ball against righties (.204 in 162 AB), which evens out to a subpar .254 last year. He saw his playing time against lefties, and as a defensive replacement. Hopefully he can come around this year, as it looks like the position lies in his hand for now. 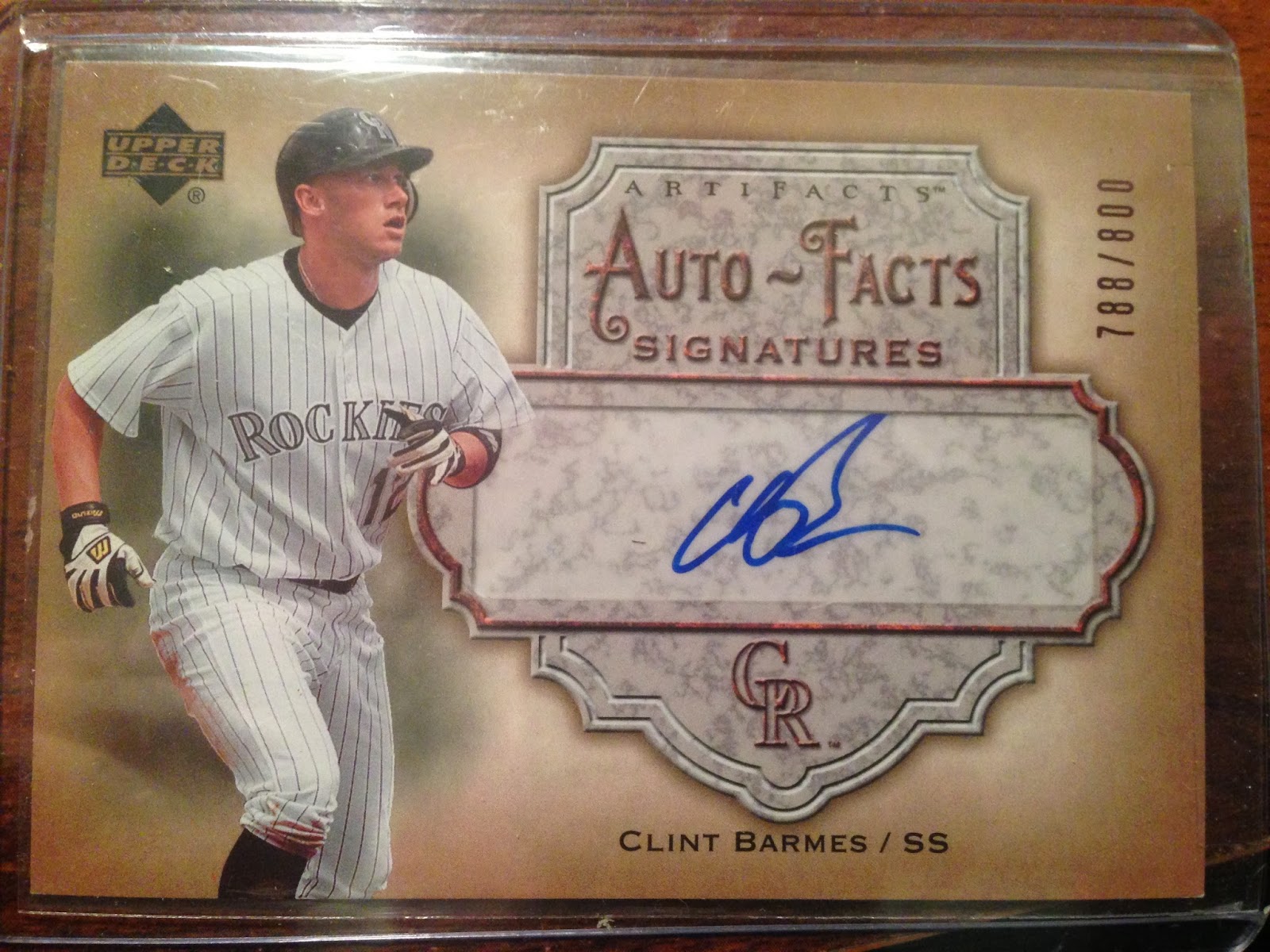 Next up is Clint Barmes from 2006 Upper Deck Artifacts, numbered to 800. Although this card is a sticker, it actually works quite well. The sticker itself is transparent and doesn't look entirely miserable on the card. It's also numbered which is always a bonus for me. This was right around $5 bucks shipped.

Clint's known as an excellent defensive shortstop with a below-average bat. He, much like Sanchez, is often inserted into the lineup in the 7th inning or later as defensive replacement. He's known as a great guy around the locker room and a true "veteran presence." If I reacll correctly, manager Clint Hurdle brought him to Pittsburgh after being impressed with Clint's character in Colorado. 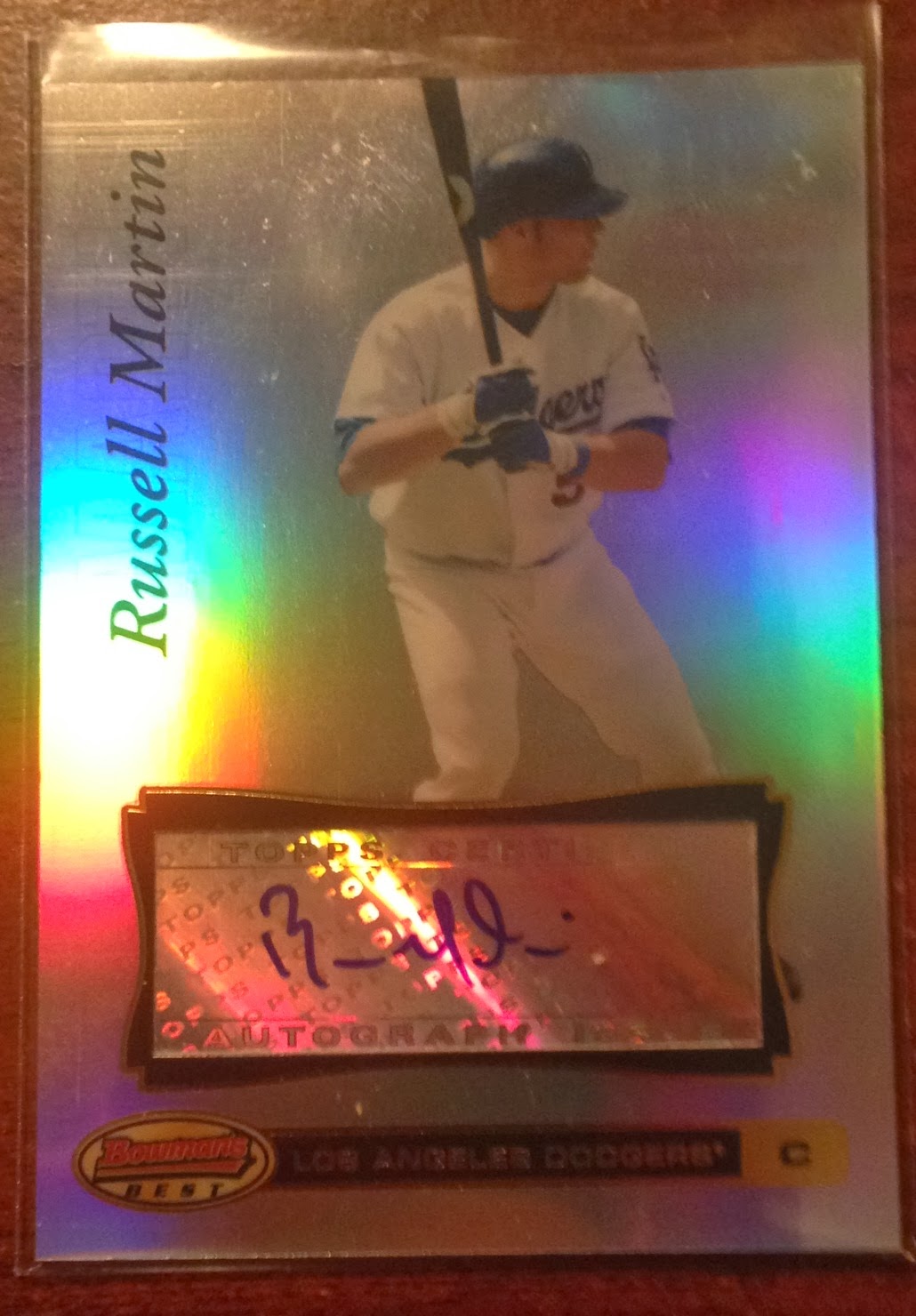 Here's Russell Martin, 2007 Bowman's Best. A simple card for sure, but I don't ever mind that. I have some beef with those silver auto stickers, but it was the only affordable option for Russ. The sticker honestly doesn't look that bad because most of the card is silver anyhow. I grabbed this card for $10 shipped.

Russ is much more of a household name than the other guys, so I'll save my comments regarding his offensive ability. What I love about him most is his ability to throw out base runners. More importantly, the threat of his cannon prevents opposing teams from running on him in the first place. According to the 2013 Fielding Bible, Martin saved the Pirates 16 total runs last year. He was also runner up for the Gold Glove Award for his position. Not too shabby. 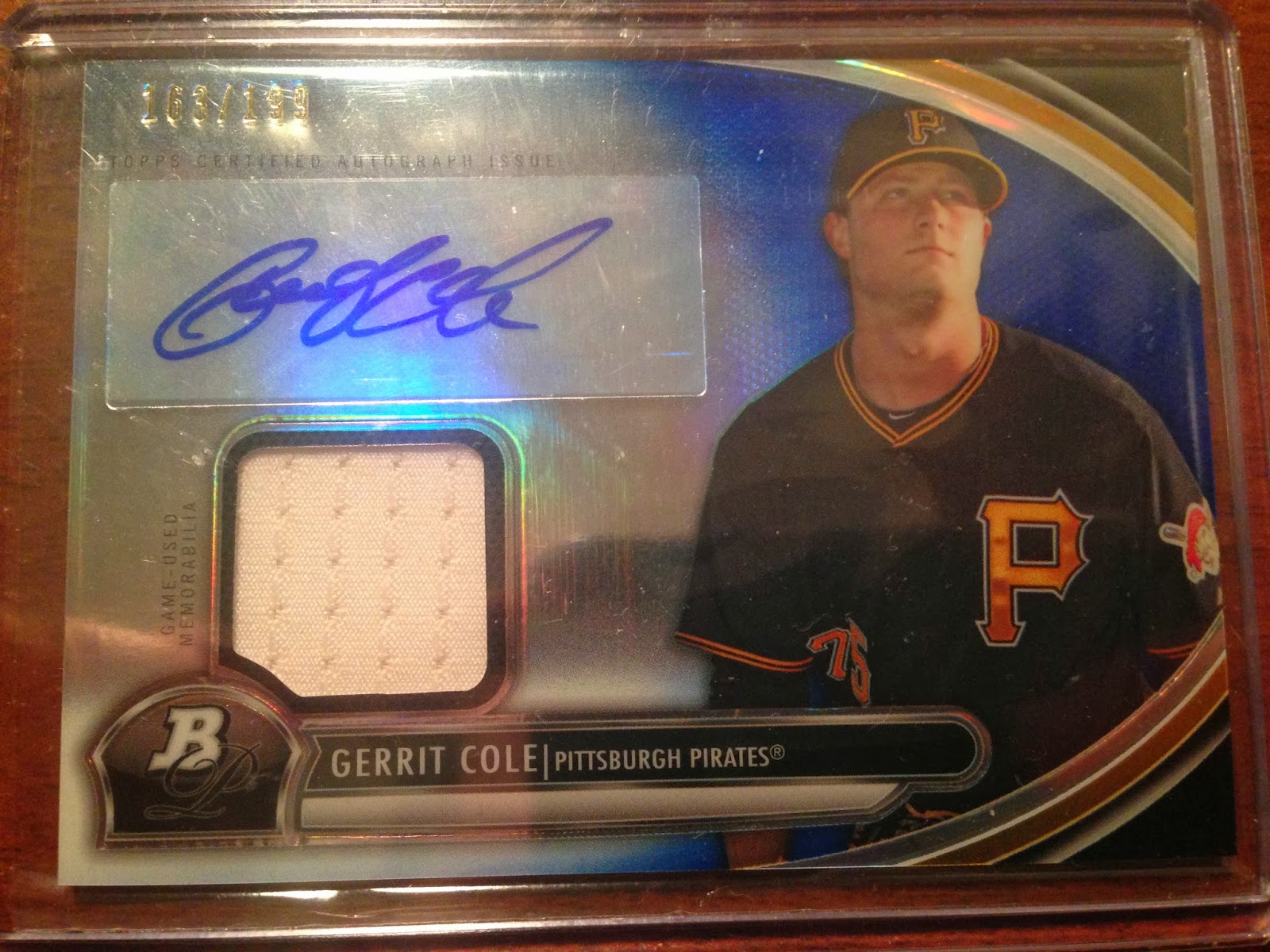 Lastly, a redemption came through from Topps- Gerrit Cole 2013 Bowman Platinum, Jersey and Auto /199. I actually bought this redemption back in the fall, and it came through in only four months, which I am NOT complaining about.  I picked up the redemption card for around $30 dollars, which seemed like a good deal at the time- and I have no regrets.

As for the card itself, it's nothing amazing. The jersey swatch is a simple plain white, and the auto is a sticker (boooo). I love the fact that it's a blue parallel numbered to 199, giving it some rarity. I also like how Cole is wearing number 75, which was his minor league number. He's been wearing 45 in the majors and most likely will continue to do so for the remainder of his career. Overall, a nice card.

Thanks for reading!
Nate

Take My 2014 Topps S1 Parallels and Inserts, For I Need Them Not

So far I've only bought two hanger boxes of Series 1. I'm happy with that, because I'm on a pretty tight budget as of now. It also helps that I'm not in love with S1, although it does offer some good stuff- none which I've pulled. In my opinion, everything I've pulled is crap. Big lack of Pirates too, which is disappointing.

Here's all the crap that I've pulled. It's all for trade, and it won't take much in exchange for you to take them home. If you're interested, drop a comment or shoot me an email at nsbell440@gmail.com! 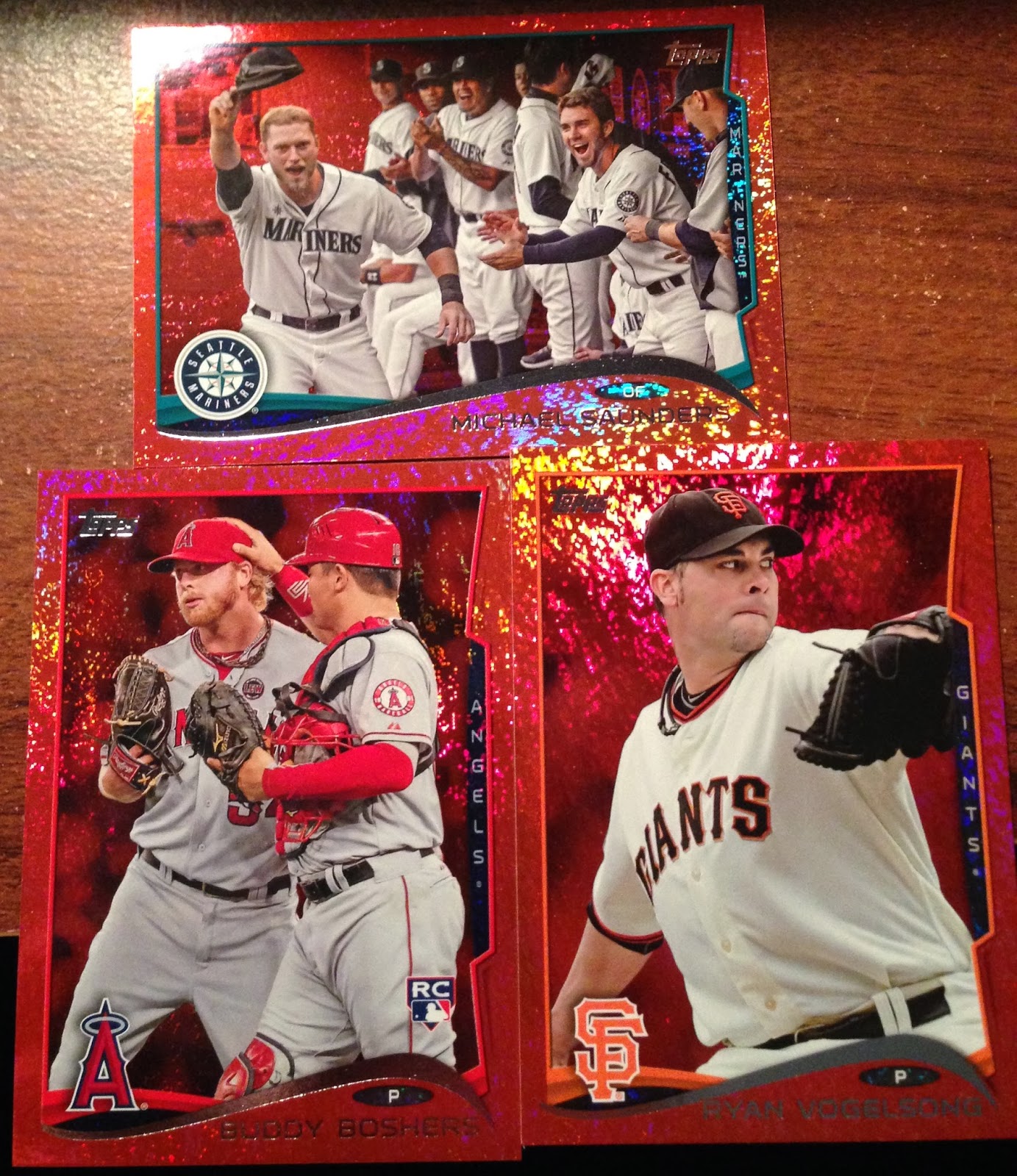 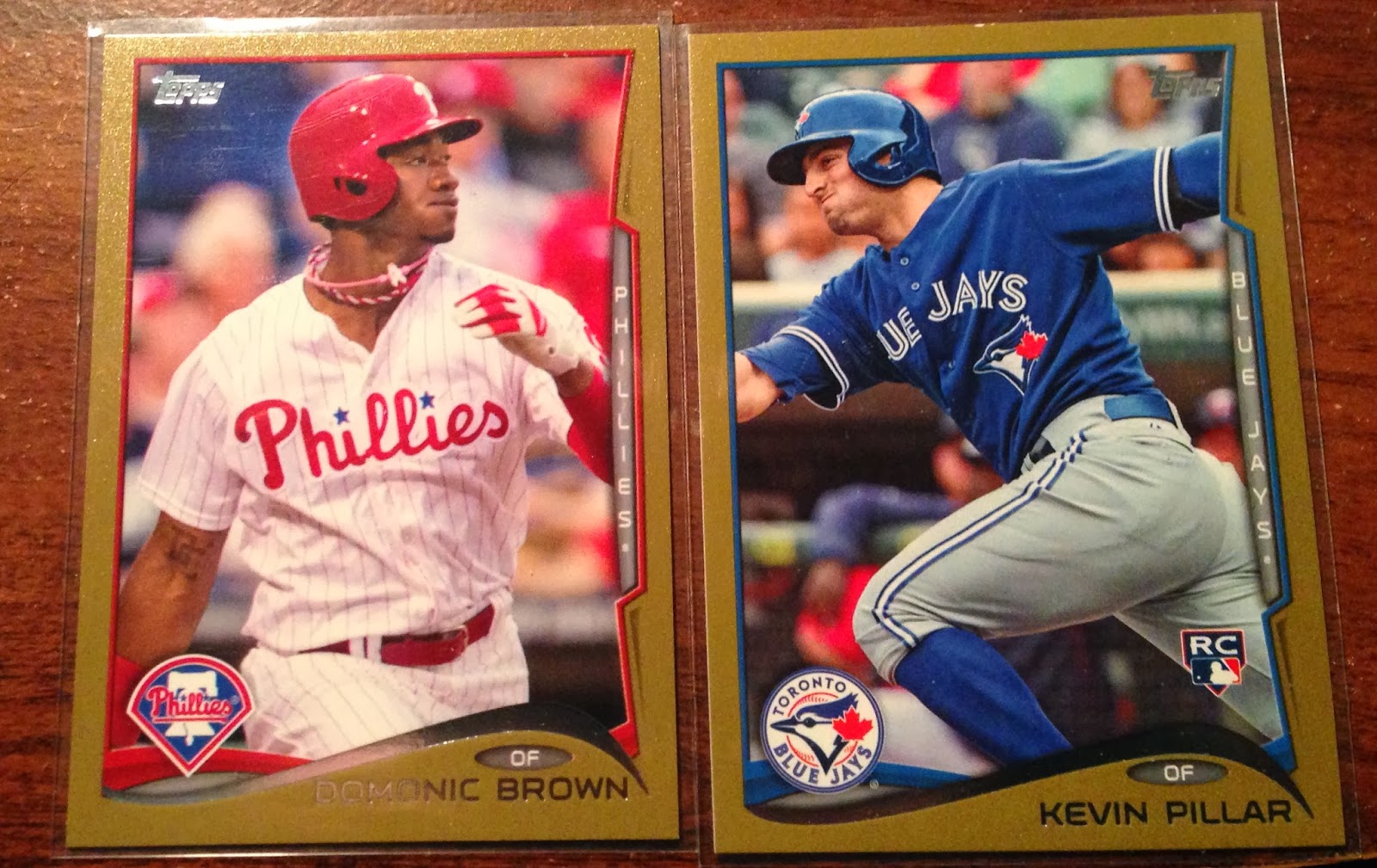 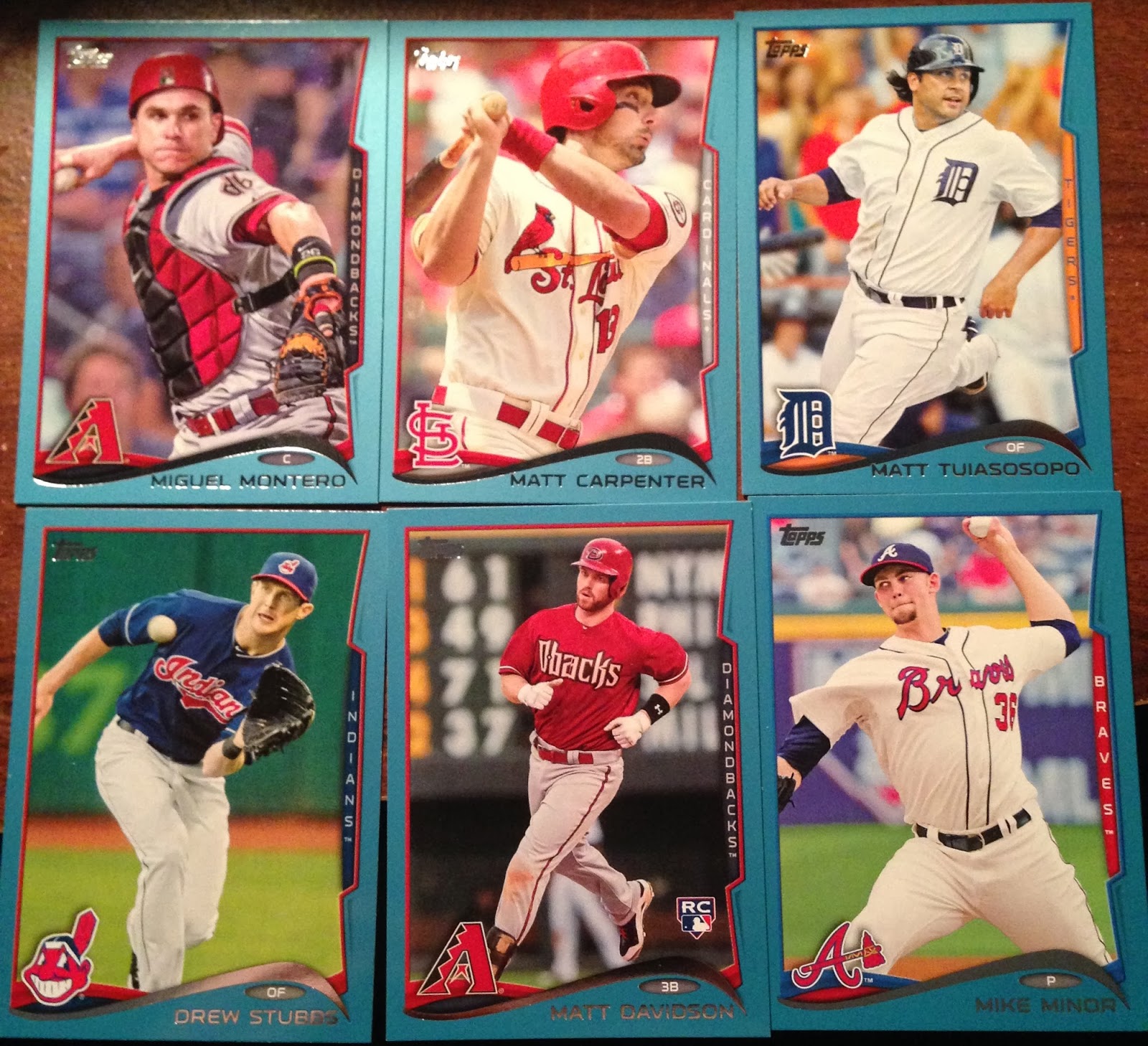 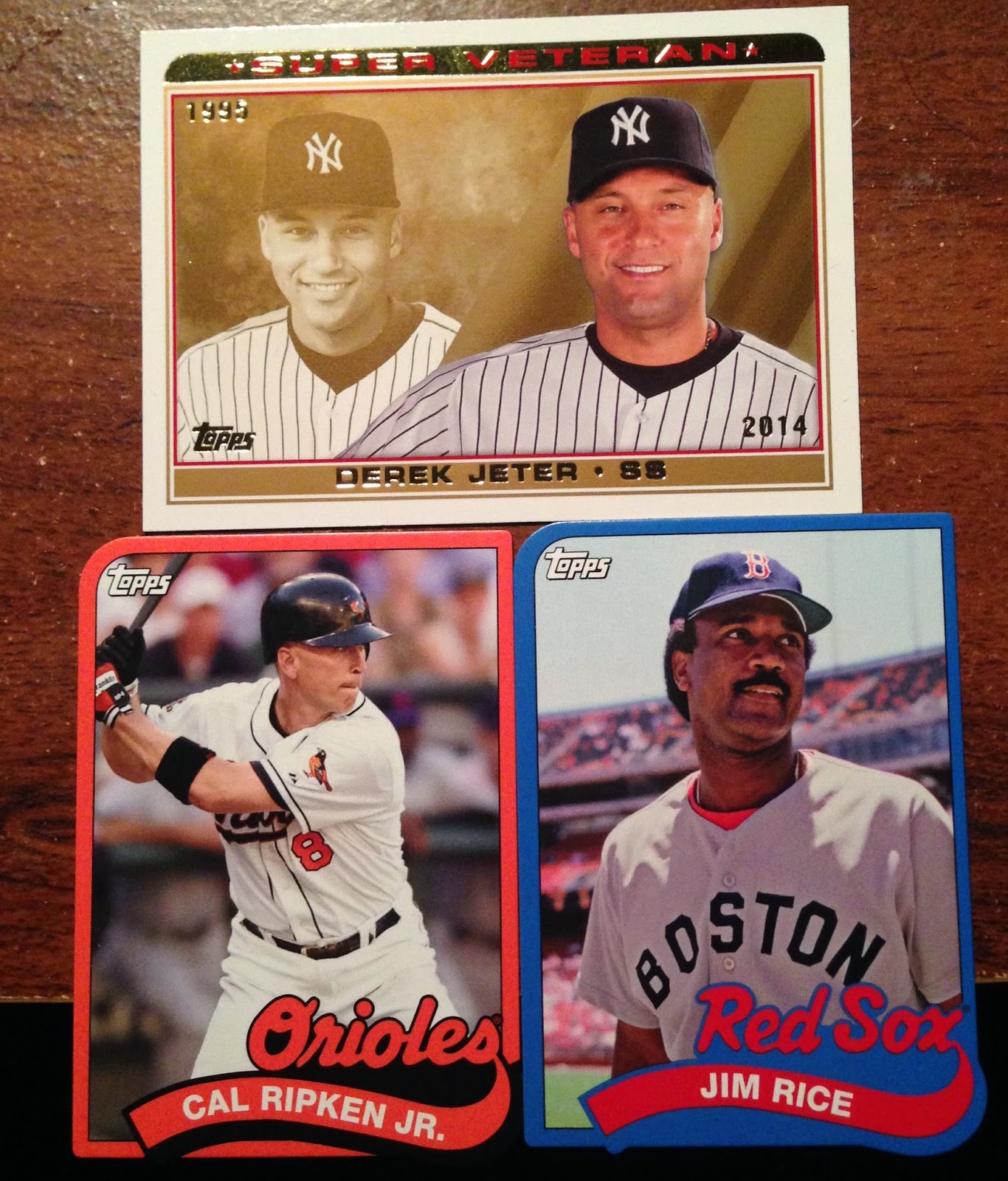 Thanks for reading, Nate

First off I'd like to extend a HUGE thank you to everyone who participated in my first ever contest!! I had exactly 60 entries, which is way more than I could have ever hoped for. I'd also like to extend an even bigger thank you to those who promoted or "pimped" the contest on their own blogs. I'm still quite new to the blogosphere and it means a lot to me that everyone was willing to spread the word. 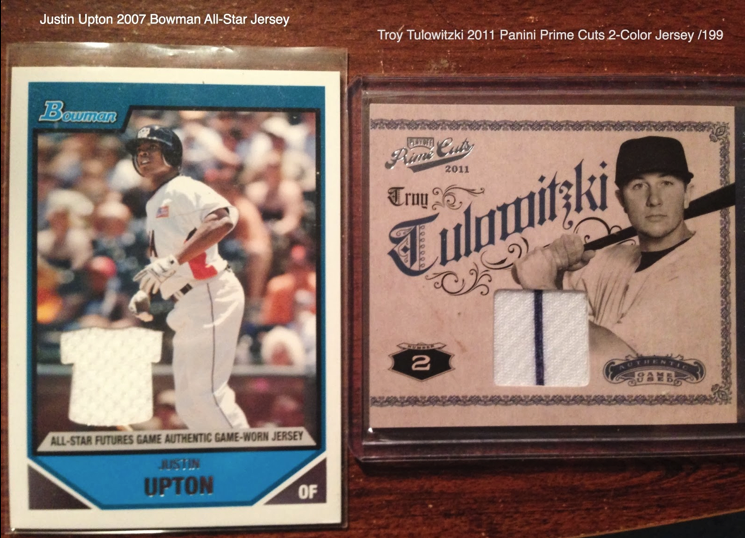 I threw all 60 entries into random.org and shuffled twice- a nice, simple number. So without further ado, here are the results: 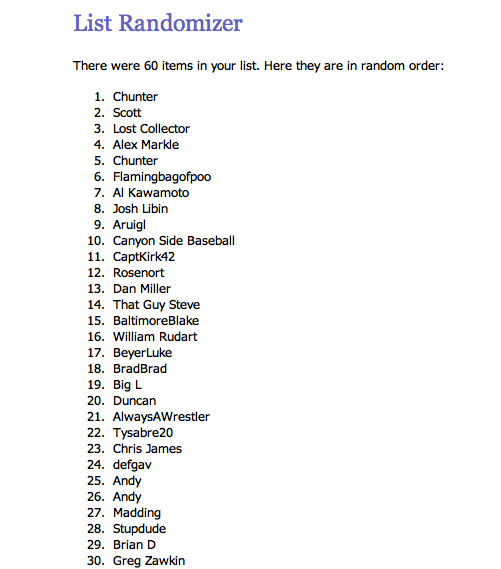 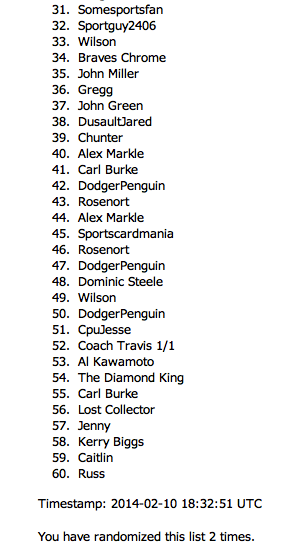 And there you have it! Please join me in giving a big congratulations to Chunter!

Chunter's a collector that I hadn't previously connected with. He runs two blogs - A Pack To Be Named Later and Chipp 'n' Dale. He's also on Twitter, @wordriht. Chunter- please shoot me your address at nsbell440@gmail.com.

As for my feelings on this contest, it was everything I had hoped it would be. As far as entries, there was basically an equal number from both the blog and from Twitter. Becuase of the success of the contest, I'll definitely hold more in the future. One change I'd like to make is stick to one media outlet per contest, to reward my blog followers and Twitter followers separately.

Again, thanks to all who participated and congrats to Chunter! For those who didn't win, fear not- there are more contests on the Big 44 Horizon!

CONTEST! Tulo and J. Upton Jerseys Up for Grabs!

Friends! I'm going to attempt to run a small contest - my first ever! Here's what's on the line! 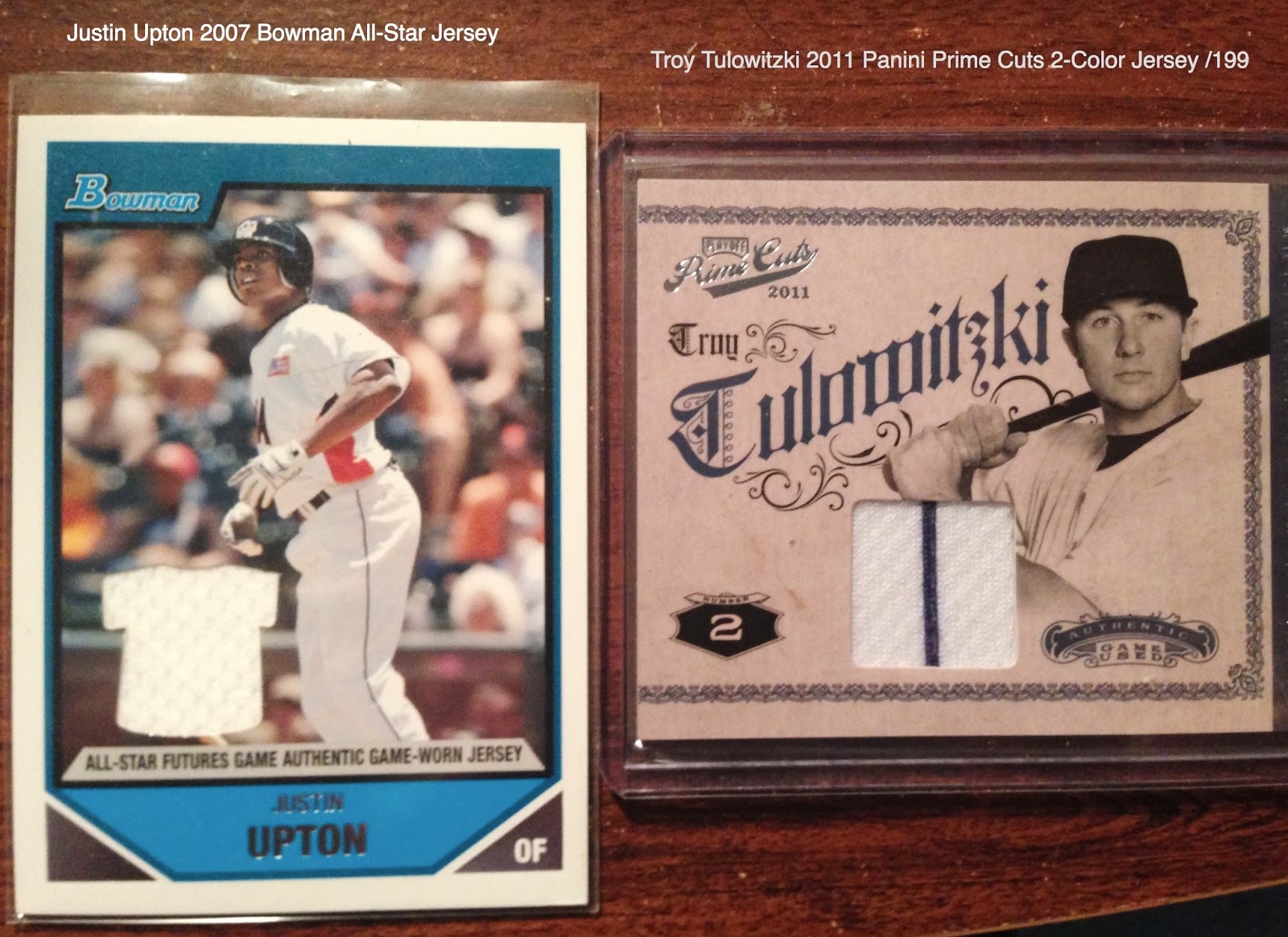 You can enter in any of THREE ways:

1) Drop a comment on this post.
2) Retweet the contest on Twitter HERE.
3) A post about this contest on your blog. Just let me know if you've done so, so I can add that to the tally.

So, a maximum of 3 entries per person, one through each of the outlets.

All entries will be randomized through random.org. Winner gets both cards! Winner announced on Monday, 2/10! Good luck!

The Future of the Pirates, In One Card

One of my informal collecting goals for this year is to acquire a certified autographed card from each of the Pirates projected Opening Day starters. I've already got several bench players, relief pitchers and role players, but I've had a hard time finding affordable autos of the young stars (McCutchen, Marte, Alvarez). Thanks to 2013 Gypsy Queen and the off-season, I've finally been able to knock one of these off my list for a decent price: 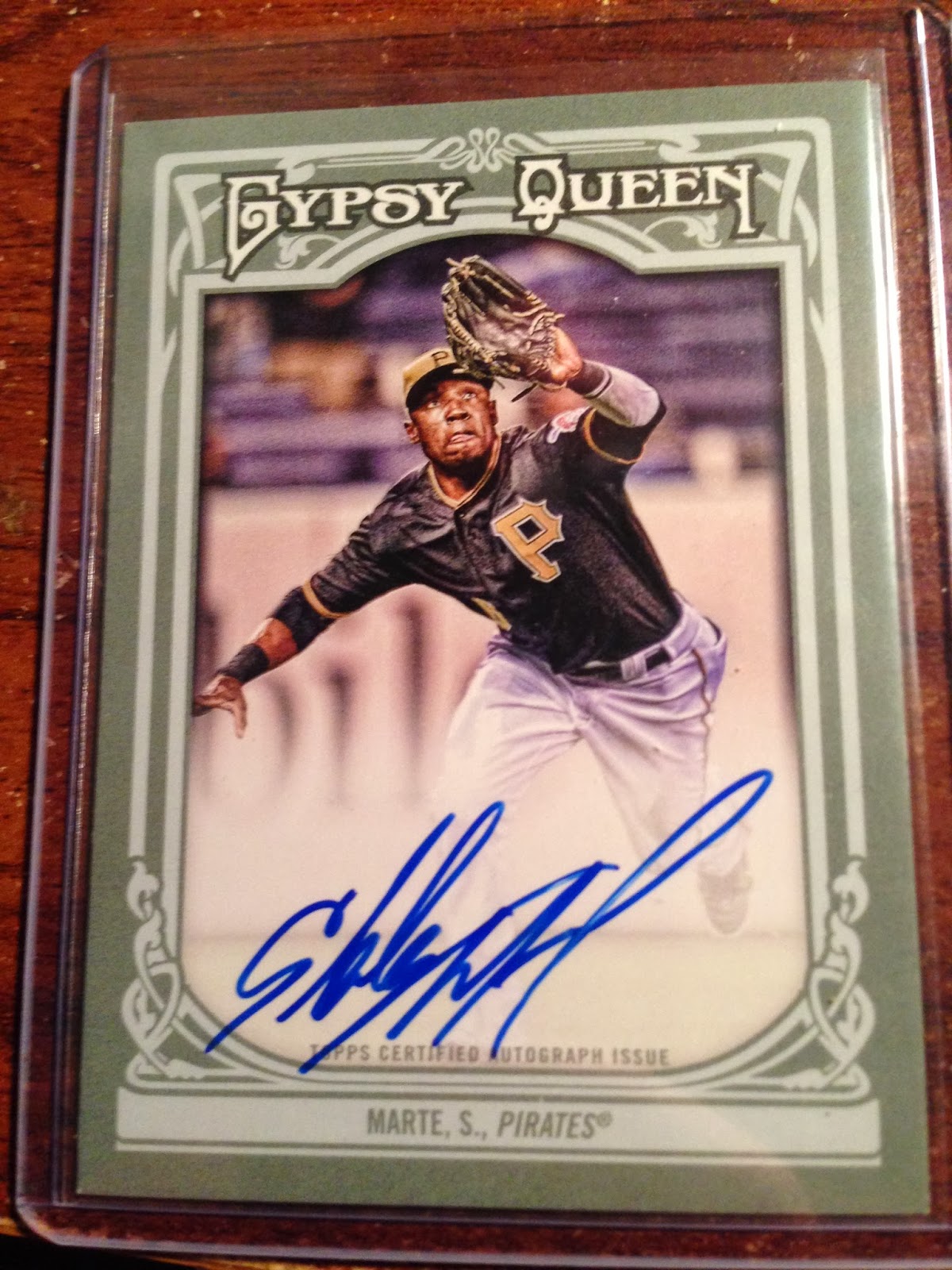 Marte is without a doubt one of the biggest, if not the biggest part of the Pirates future. The guy has all of the tools to be to a bonafide star, and times he already looks as if he is one. He also prompts some awesome calls from Pirates announcer Greg Brown, usually including the cheesy-yet-awesome exclamation, "MARTAY-PARTAYYY."

To hear that call and others, play around with this for a minute. I guarantee it will give you a chuckle.

I feel like Gypsy Queen autographs embody everything that a perfect card should have. Sharp action photography, a nice border, and sufficient room for an on-card signature.

Starling's inscription is a little violent looking and the centering is a little poor, but this card is actually better than many I've seen. For less than 10 dollars shipped, I will refrain from filing any complaints. This baby is a welcome addition to my Pirates PC.