Another month has flown by. I stopped today to take a look at all of the cards I acquired in March, and it was another great month of grabbing singles. The sports card market is still blazing hot, and I'm still taking full advantage of that by continuing to sell cards that I'm ready to move on from. The eBay Standard Envelope mailing option is, in my opinion, one of the greatest things to happen to our hobby in the past decade. It's really enticed me to list some PWE-ship cards that I never would have considered listing.

As I send cards out, I'm able to bring cards in. 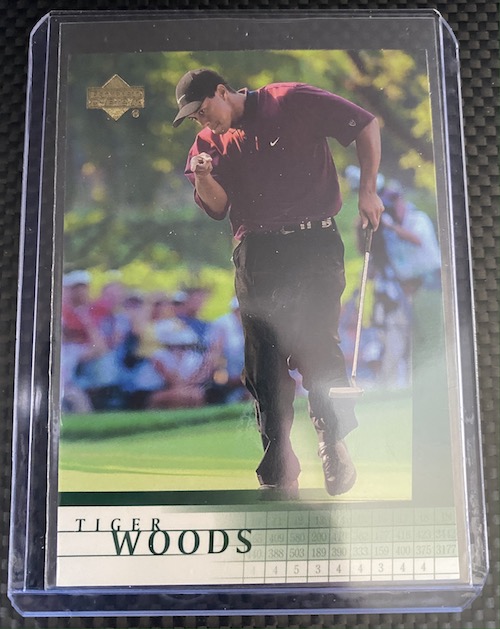 Tiger Woods - 2001 Upper Deck RC
I wish I would have grabbed this last year when it was a $10 card, but better late than never. This rookie card is almost one of those "must haves" for any collector. Tiger is consistently ranked amongst the greatest athletes of all time. I wanted to grab one in good condition, and paid a little extra for that luxury. If all goes according to plan, this will be the next 1987 Fleer Jordan and it will pay for my kid's college tuition some day.

Nolan Arenado
2013 Bowman Draft Base
2013 Bowman Draft Chrome
2013 Bowman Draft Chrome Refractor
Is it just me, or has Nolan Arenado become one of the most under-appreciated players in baseball in the last year or two? Playing in Colorado probably hasn't help him. That should change when he's a big time factor in the middle of the lineup for the Cardinals, who will try to contend with the Cubs for the top spot in the NL Central.
Just in case you've forgotten about this dude, from 2015-2019, he never had less than 37 HRS and 110 RBI in a season. In that five year strech, he led the NL in HRs three times, and led the entire league in RBI twice.
Oh, and he's won a Gold Glove in every single season that he's been in the majors. Yep, eight for eight. He's only 30 years old -- and aside from the 2020 season that was fluky for so many top players -- he's showing no signs of slowing down.
You can have your Sotos and Acunas - I'll take my Arenados, thank you very much. I grabbed this lot of three cards for $27 total. 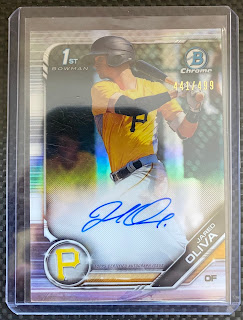 Jared Oliva - 2019 Bowman Draft Chrome Refractor Autograph #/499
The 25 year old Jared Oliva was looking to have a shot at the major league roster this year. The Pirates are lacking depth in the outfield and I thought Oliva had a chance to grab a backup spot. After collecting only a few hits in spring training, he was optioned to the minor league camp last week. The former 7th round pick will try to prove himself in AAA. 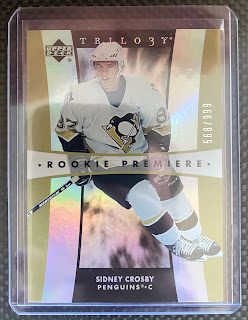 Sydney Crosby - 2005-06 Upper Deck Trilogy Rookie Premiere #/999
Casually sliding in one of the largest single card purchases I've ever made. As I watch more hockey, I'm really starting to appreciate the greatness of players like Sydney Crosby, Alexander Ovechkin, and Connor McDavid. I've had the privilege of watch Sid in person a few times and it doesn't take long to understand that you're watching a master of his craft.
I was really hoping to land a card with a serial number on it, but it can get pricey. I've been keeping an eye on a few Sid rookies for a few months, and finally found one I was comfortable pulling the trigger on.
This one was in my price range. It's super clean - great surface, sharp edges and corners. There is one flaw on the card, which the seller was kind enough to highlight so it wasn't a surprise. Check out the pictures below and you can see the chipping right along the bottom center of the back. I decided it's a flaw that I can live with, and the price reflected it. 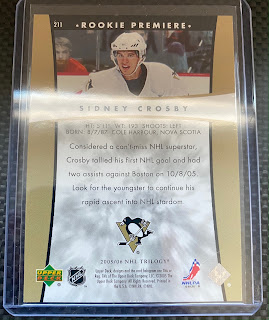 Like I said - very minor, and I can definitely live with it. The rest of the card is nearly flawless. 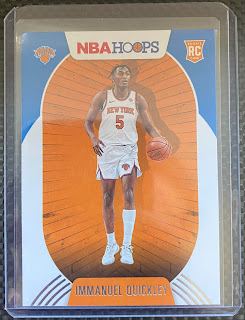 Immanuel Quickley - 2020-21 NBA Hoops
My little Knicks PC barely ever makes it on the blog, but it's been picking up some steam now that we're becoming a competitive team again, and there are actually some players worth rooting for. As a pseudo-Kentucky fan, I watch nearly every one of Immanuel Quickley's games at the collegiate level. I'm definitely biased, but I was pumped when the Knicks drafted him. He's already looking like a late-first-round steal and potentially one of the top five picks in the draft. I let the Hoops craze die down for about a month after it's release and then grabbed this for $4.

2020 Prizm Draft Prospects - Elijah Hughes Auto
Speaking of $4 pickups, I grabbed this Elijah Hughes auto. Hughes was the catalyst for 'Cuse's success last year. A lanky 6'6 shooter, his game is built for the NBA. He was selcted by the Jazz in the middle of the second round. He's bounced between the G-League and the big leagues and I hope he'll be able to stick at some point. 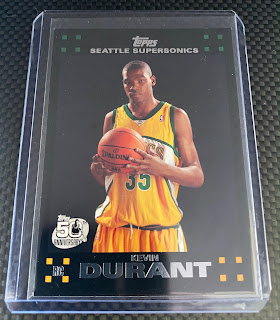 Kevin Durant - 2007-08 Topps RC
The last pickup is another beauty. This is considered Durant's "true" rookie. The Nets are going to be NBA Finals worthy this year, and I wanted to grab a Durant rookie before they make their run and the prices skyrocket. If all goes according to recent events, we may be looking at a Lakers-Nets final... and it would be one for the ages. If the Nets can pull it off, Durant would be the odds-on favorite for MVP. Each of those steps falling into place might be a long-shot parlay, but this would be a hell of a card to own if it happens.
It's a classic 2000's rookie card. You have to love the old baggy Sonics jersey. I really do miss Topps basketball cards. I have a lot of gripes with Topps, but it would be fun to see them produce licensed hoops cards and give Panini a competition.
Thanks for stopping by. Hopefully I'll get another post up before the April Mail Roundup, but no promises!
Posted by The Bucs Stop Here at 6:04 PM 3 comments: