Opening Some Series 1 Thanks to College Football

Who would have thought that a random Bowl Game played in December would land me some baseball cards in mid-February.

Prior to bowl season, Kerry over at Cards on Cards hosted a really cool contest for the eleventh straight year! It was a classic college football bowl pick 'em with a small twist. You picked your bowl winners, but also placed a confidence rating on each game, which rewards you with more points for games you rank high on your confidence scale. It's pretty simple: There are 41 bowl games. You make your win/loss picks on all 41 games. Then, you rank the games 1-41 on how confident you are that your pick will be correct (41 being the highest, 1 being the lowest). Your most confident pick is worth 41 points. Your second most confident pick is worth 40 points, and so on.

It was my first time in a contest of this style and I had a blast. I didn't win the contest overall although I *thought* I did pretty well. I was in the 84th percentile of all ESPN participants but finished 11th place out of 29 participants in our pool - which was apparently loaded with college football experts!

There was a neat little side contest that asked participants to guess the winner of the Belk Bowl as well as the final score. As a casual Kentucky football fan, I was pretty confident in the underdog Cats. I was one of few who took them - and although my score prediction of 24-14 was well under the final score of 37-30, it was the closest guess of those who took a chance on UK.

For the prize, Kerry was kind enough to send a 2020 Topps Series 1 fat pack my way. I don't typically bust open a large amount Topps Flagship so this was a really great way to get my fix. I haven't shown any Series 1 on the blog yet so I'll use this opportunity to share my thoughts on the product. 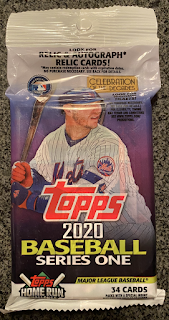 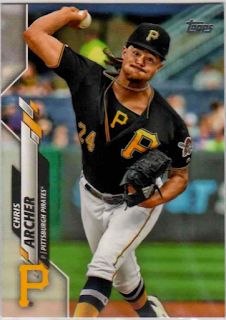 Only one Pirate but I'll certainly take it. I think Archer could be primed for a comeback season. He can't get much worse than he was last year, but I'm really hoping he can return to his days of owning a three-point-something ERA.

As for the base design, it's fair. I am a big fan of borders as long as they're done right. I feel like flagship always has a border, so this is some interesting new borderless-territory. For a design without borders, it certainly works. The photography is great but it's not Stadium Club! 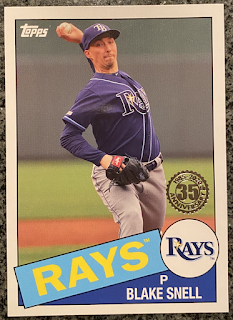 2018 Cy Young Winner Blake Snell on a really nice looking 1985 Topps 35th anniversary insert. I like the foil stamp. The only Pirate that shows up in this set is Roberto Clemente 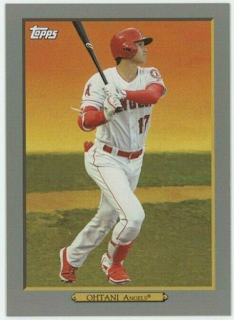 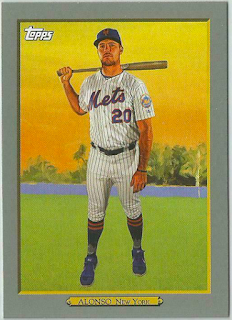 Turkey Reds are back in the 2020 set, and I got two hot names. I'm a big fan of these cards coming back. They also come in the form of Chrome parallels. I haven't held any in-hand yet, but as a guy who loves all things shiny I'm very eager to see them. The set is 100 cards and features two Pirates, Josh Bell and Chris Archer, so I will likely try to get my hands on those.

Thanks again to Kerry for hosting the contest again, this pack was really fun to open.
Posted by The Bucs Stop Here at 7:20 PM 1 comment:

Additions to the Pirates Gold Room

I often struggle to understand my identity as a collector. Wether its on the blogs or on Twitter, I feel like I often come across collectors who are very specific and intentional with their collections.

At the end of the day, I'm not too specific. I don't have a favorite player. I rarely build sets.

However! If there's one thing that I love above all else, it's Pirates gold refractors. I've been making a point to acquire gold refractors as often as possible. Typically, Topps gold refractors are serial numbered /50. That's a good sweet spot for me. Only 50 copies makes it decently rare - but not impossible to find. Prices can get steep, but I haven't seen anything too outrageous.

Here are some of my recent pickups: 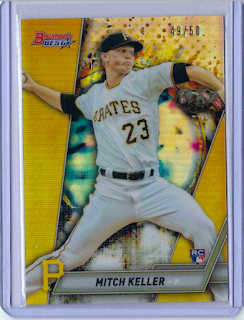 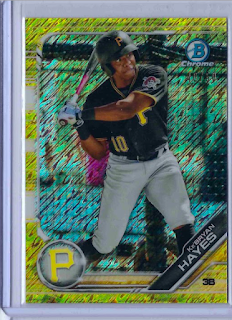 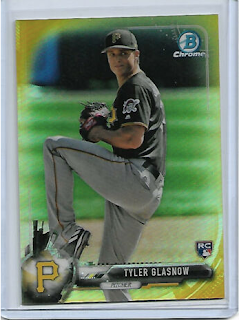 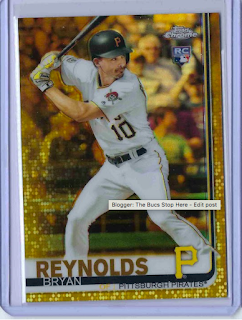 I've really enjoyed chasing after these. I feel like it's given me some purpose when it comes to "what to chase," and as we know, the chase is half of the fun.

This is my first basketball-related post since the passing of Kobe Bryant, so let me start by expressing my sadness. Like all basketball fans, Kobe meant a lot to me. Kobe was basketball. I grew up with Jordan, then Kobe, and now LeBron. Rest in peace Kobe, Gianna, and the others that lost their lives on Sunday.

Like many collectors, I began to sort through my collection, looking for Kobe cards that to remember him by. It also reminded that there's one Kobe card that has been on my mental wantlist for some time: Kobe Bryant, #24 from 2008-09 Topps Basketball. Prices for this particular card skyrocketed, of course - but I still felt like there was no better time to honor Kobe and try to add this card to my collection.

I did some research and learned that 2008-09 Topps Hobby boxes are actually somewhat affordable. They contain 36 packs of 10 cards - so the odds were in my favor to pull the exact card I wanted. I jumped on the DaCardWorld and they had just one box in stock, so it seemed meant to be.

There are some really awesome cards in this box - dig in for a minute and enjoy the ride with me. 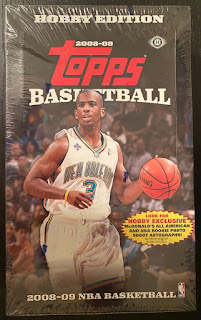 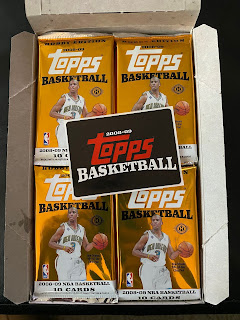 Upon opening the box, I was greeted with the sticker below. On the back of the sticker, it says to stick it your set once it's complete. That's a cool little touch that definitely became lost in collecting sometime between then and now. 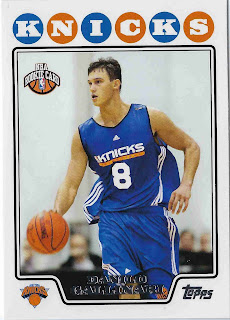 To showcase the base design, I'll use my favorite Knicks pull out of the box. I'm a huge fan of this design, which will look familiar if you collected Topps baseball in 2008. When Topps had the basketball license, they would use the same design for both basketball and baseball flagship. I think the design works a little better for basketball. 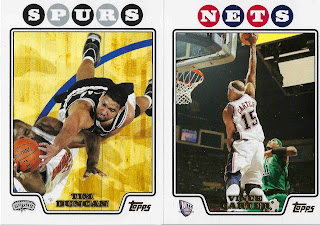 Check out the text on the names above. It's hard to see, but the text is gold foil. I pulled about 32 of these, so they fall just about one per pack. Duncan and Carter are two of the best that I pulled. How about the photo of Vince Carter! 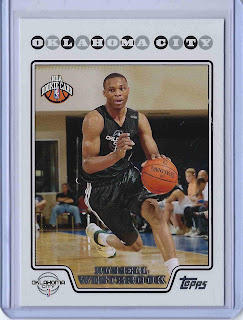 Possibly the most prized rookie in the class, Russell Westbrook. 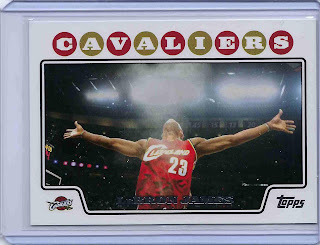 This could possibly be the greatest LeBron James base card ever printed. I mean, wow. What a beauty. Capturing what is likely the most iconic pregame ritual in sports. I was hoping to pull this card, so I was over the moon to see this show up.

There aren't a ton of inserts in this set which I really like. I'm a big fan of parallels but overloading inserts can be a real turnoff for me. I think these are technically variations, not inserts. I recognize this design as Topps 1958-59 which has shown up recently as a throwback design in Topps baseball products. 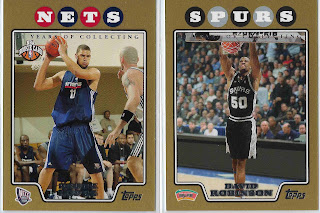 I pulled four gold parallels - which, in typical Topps fashion are numbered to the year of the set, so in this case #/2008. They commemorate 51 years of collecting across the top of the picture. These are the better of two of the four gold pulls. 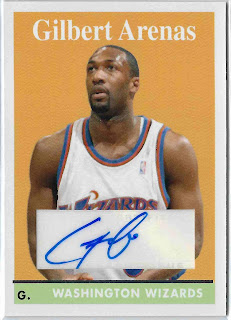 Each box guarantees one autograph or memorabilia card, and here's my hit. When you're promised either a relic OR an autograph, you can basically bet the house that you're getting a jersey card. I was almost entirely certain that I'd be taking away a Martell Webster jersey patch or something similar. To pull an autograph from a proven vet is a BIG win. Nowadays, Agent Zero is more familiar to me as an outrageous yet hilarious social media personality (if you've haven't checked him out yet, do it), but not long ago he was prolific scorer in the league. 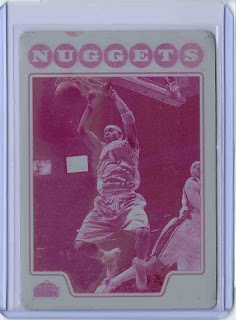 The mojo keeps coming! How about this guy? Kenynon Martin magenta printing plate. 1/1. You never expect to pull something this rare and I'll certainly take it.

I really liked K-Mart back in his New Jersey Nets days with Jason Kidd, Richard Jefferson, Vince Carter, Kerry Kittles, and so on. I'm not exactly sure what to do with his card aside from stash it away as a really unique piece of my basketball collection. 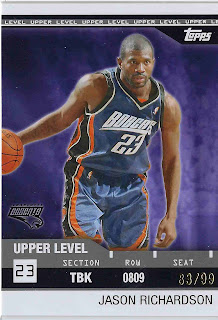 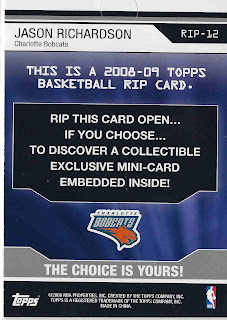 Just when I thought it couldn't get any better, I came across this guy. A classic "rip" card. I didn't know this set had rip cards until coming across this, so I dove in and did some research. Because this set is over 10 years old there's really not a lot of information out there. I learned that the rip cards are case hits, and I was able to find a couple YouTube videos that show actual rips. From what I can tell, the miniature cards inside are just like an Allen & Ginter mini. It doesn't appear that they're ever autographed or serial numbered, so the play might be keep it unripped. But, what's the fun in that. You might say I'm pretty "torn" on what do with it... 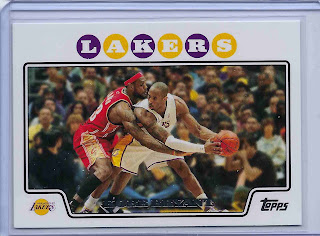 And for the grand finale: The reason I bought the box in the first place. I was lucky to pull this card in my first few packs, so the rest of the box was house money for me.

Card #24, for number 24. This card... it speaks for itself. This card is about more than just Kobe. The imagery and symbolism is outstanding.

How's this for symbolism: The year is 2008. In the picture, the basketball represents the best player in the NBA. Kobe is stretching to keep that title from LeBron, and LeBron is reaching for it. It's just out of reach. Someday LeBron might take that ball from Kobe. But not today.

If the perfect sports card exists, this is it.