Charlie Blackmon is a baseball player that I really love. He's just a really solid all-around ball player, and theres a ton to love about him:

I've been keeping my eye on several 2009 Bowman Chrome autos of Charlie's for a while. They're a bit pricey, but after several months of watching I finally found a good deal. Of course I made sure to get the refractor version, #/500.

Hope you enjoy it as much as I do. 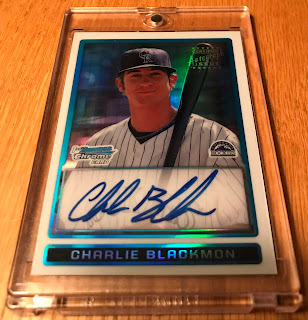 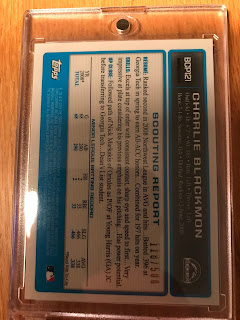 It's that time of year! The time when I randomly get an email from UPS telling me that a package is going to be delivered to me in a few days, and I start to wonder what the heck it is. I ponder for a minute and then I remember that it's the box of Bowman Chrome that I pre-ordered months ago. It's become somewhat of an annual tradition for me: Sometime in the summer I pre-order one box of Topps Chrome and one box of Bowman Chrome, and it becomes a nice little surprise a few months later.

This year, Bowman Chrome took a different route with Hobby: 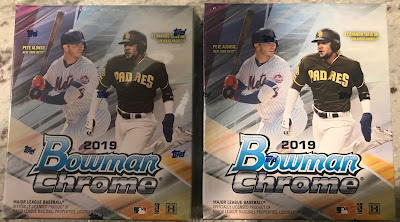 On to the highlights: 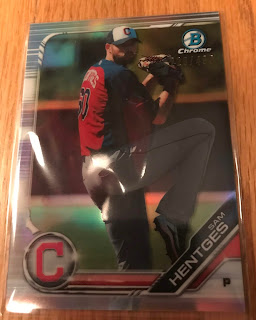 Sam Hentges Chrome Refractor /499. Hentges is a 23-year old lefty who spent the year in AA with the Akron Rubber Ducks, the AA affiliate for the Indians. He finished the year with 5.11 ERA. 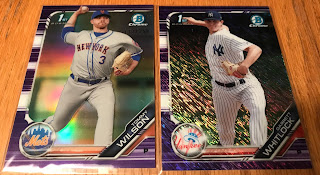 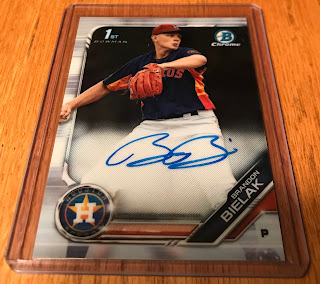 Brandon Bielak base auto. #11 prospect in the Astros system, and seems to have some good upside. 11th round pick out of Notre Dame in 2017. He was pitching in AAA this year, so his arrival may come sooner than later. 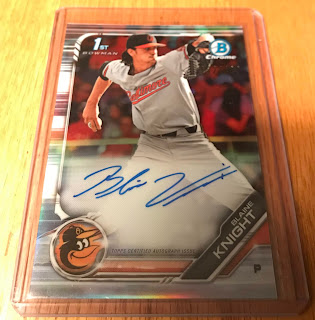 Blaine Knight Refractor Auto #/499. #16 Prospect in the Orioles system. This 23 year old weights in at a whopping 165 pounds, so he could certainly add to his 6'3 frame. He was a third rounder in the draft this year and from what I've read, a live arm.

So there we have it. Overall, this was a fun break. All of these cards will be going directly into storage and I'll revisit them down the road. Unless you hit a unicorn, that's the attitude you have to have with Bowman Chrome. Store them away and revisit in a few years. Patience is a virtue in collecting. I've learned that the hard way, like the time I flipped a Giannis rookie relic in 2014 just to reimburse the cost of the repack I found it in. Man... what I would give for a 5-year rewind with that one.

Last week I joined a group break for the first time in years. While browsing the cardboard blogosphere recently, I ended up on the Cardboard Connection reading a guide about the best group break sites. They mentioned Real Breaks, who is Facebook-exclusive family friendly group. They have an assortment of breaks with a little something for everyone - pick your team, random team, etc. I believe they do mostly case breaks.

I started by just joining the group and not looking for any specific group breaks. Of course over time I started to get notifications, and one night I found myself checking out a 12-box case break of 2019 Topps Chrome, which will yield 24 autos. The Pirates don't have the greatest autograph checklist in 2019 - so my yield had a low ceiling - but that also meant that the price was right. For $30, I jumped in.

The whole break took about an hour which is a long time to tune in to hope for one or two good cards. You'll need some free time and some patience. If you're feeling social, the chat can certainly help keep it interactive. I should also mention that I received all of my cards within a week of the break! Speedy.

Aside from accumulating about five team sets, I did land three nice cards: 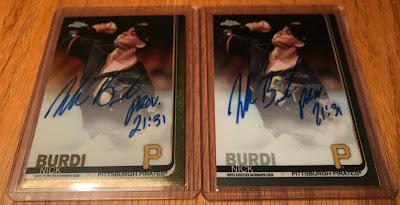 Two Nick Burdi autos. The one on the right is the base auto, but the one on the left is the gold parallel #/50. I'll take it! I guess Burdi shows up a ton in Chrome and sort of saturates the product. The break host was joking about "another dang Nick Burdi card." I'm not complaining.

Burdi carried a lot of hype into the season this year because he can creep into triple digits with his fastball. He won a spot in the bullpen out of spring training and was expected to work his way into meaningful late innings. That was cut short after just 11 appearances when his elbow acted up and he underwent his second Tommy John in three years. He's only 26, so here's to hoping he can come back strong some time next year. 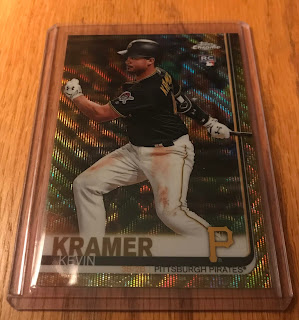 Here's the card that I was most excited about, a Kevin Kramer Gold Wave #/50. There's something about gold parallels that really bode well with the Pirates. Yes, the Pirates colors are often referred to as "Black and Gold." In reality, it's black and yellow, but yellow parallels are generally impossible on the eyes. Gold parallels on the other hand... give me all the gold.

Overall, I'm pretty happy with my return. Group breaks will always involve risk, but this one worked out. I'd definitely recommend Real Breaks to those looking for a taste of a break without buying a box.

Newman and Kramer: PWE and Some Random PC Adds

I've been a big fan of Sport Card Collectors for a long time. I'm a frequent reader and I especially enjoy the product reviews, which have often inspired (or discouraged) my hobby box purchases.

I was browsing through the blog the other day and noticed a few late 90's Topps football cards on the wantlist. I have a handful of football cards from that era, so I dug through some of my football commons and was able to dig up two of the cards on there. I contacted Matt who runs the blog and in a few days we had a PWE swap lined up.

I had my eye on a few of his recent breaks after seeing Matt pull a few good looking Pirates. 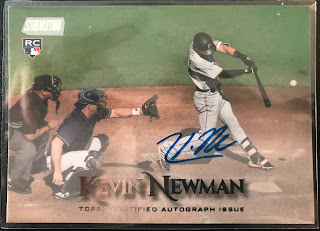 First up, Matt sent me this 2019 Stadium Club Auto from Kevin Newman. I've never busted open any Stadium Club myself, and I'm not sure I ever will. The photography is great - we know that - but I find myself gravitating towards bordered cards. Therefore, it's awesome to get another Stadium Club Auto in my collection, especially from a guy who has been super impressive in his rookie season. 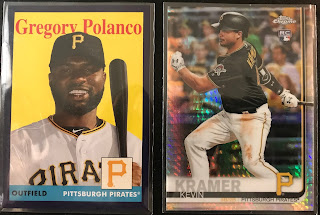 The other card I requested is the 2019 Topps Chrome Kevin Kramer Prism. I do love some me shiny! At this time last year, Newman and Kramer were projected as the future middle infield for the Pirates. "The Seinfeld Double Play." That hasn't gone exactly to plan as Kramer has been on a slower path of progression. 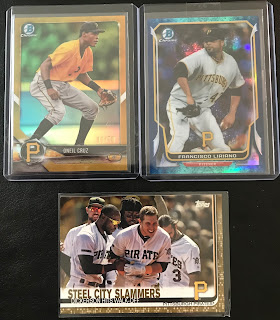 Top left: 2018 Bowman Draft Chrome Oneil Cruz #10/50. This guy is super intriguing. First off, he was traded at the deadline in 2017 straight up for reliever Tony Watson, who went on to pitch very meaningful innings for the Dodgers in the playoffs that year. Need more? His dad named him after Paul O'Neil! Not enough for you? He's a 6'6 shortstop, who has a cannon for an arm and a ton of raw power.

He's 21 years old and was promoted to AA in August. He probably won't stick at that position, but so far his pure athleticism has been enough to keep him there. This is my first Cruz card. I'd love an auto, but he's only signed one licensed product so far and the prices aren't reasonable.

Bottom: 2019 Topps Series 2 Steel City Slammers. I mean... Steel City Slammers. Only two of the players on this card are still Pirates, which sounds about right since it's September and I'm a Pirates fan. Sweet card nonetheless, and a really great way for me to remember Corey Dickerson in one card.

Thanks again to Matt for the awesome PWE swap, and thanks to you for reading!
Posted by The Bucs Stop Here at 5:12 PM 2 comments:

"Released to a Join a Contender"

Life as a Pirates fan in September. The games are meaningless, the rosters expand and we're told we'll get a glimpse into the future.

This year we also get to reflect on the past, as one of the clubhouse leaders decided to move on from the NL-Central-bottom-dwelling Buccos. About two weeks ago, the Pirates released Francisco Cervelli so he could join a contender. His request. As a fan, you never want to hear those words.

Hell, I don't blame the guy. Why stick around for 25 more meaningless games, if you don't have to? I'm not saying he's a quitter. He's not. By all accounts Cervelli poured his heart and soul into his job. On the day of his release essentially every Pirates starting pitcher posted a thank you to Cervelli for helping them grow as pitchers.

After seven concussions it's a miracle he's still playing. He's 33, and in an 11 year career he's only had about 2200 ABs. A healthy everyday player would get that in four seasons.

I've casually tried to collect some of his cards and I'll be the first to tell you that there's just not that much out there. There are bunch of dual autos of him and Buster Posey in 2009 Bowman Sterling -- with those heinous silver stickers -- and for the price, that's just not for me. Of the Cervelli cards that are out there, most of them are Yankees. My personal favorite of my collection is the black parallel from 2010 Topps Update. 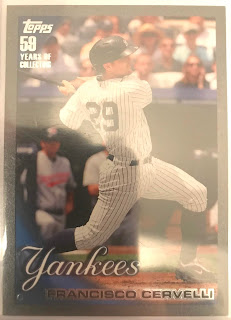 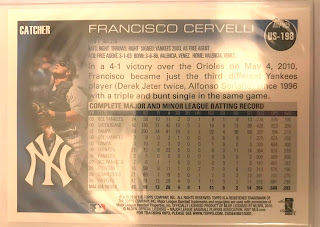 I promise that someday soon I'll get a decent scanner. The good ol' point-and-shoot with my iPhone just really isn't cutting it when it comes to cards. Seriously, the pictures are pitiful. I know.

You'd never know unless and I told you: You're going to have to zoom like crazy to confirm this, but this card is serial numbered to 59. Bottom left corner on the back of the card, celebrating 59 years of Topps.

Best of luck to Francisco in Atlanta.