At this rate, this blog is amounting to monthly "Mail Roundup" posts, which will have to do for now. Life is getting very busy, and I'm starting to learn how much free time I was granted during my quarantine-life. Life is back to normal (for now) and it really has been tough to sit down and write.

It's still better than the blog dying all together.  I think writers in the blogging community put a lot of pressure on themselves to write consistently and often. Two years ago I made the commitment to write one post a month, and I've more or less stayed true to that, and frankly it's something I'm proud of.

The other good news is, while I'm having a hard time getting in front of the computer to write, I'm still collecting at a decent pace and I'm making it a point to carve out time for my hobbies, and I've had some fun maildays that are worth showing off here. And, since I missed a post in June, I'm back to round up two months worth of card mail. 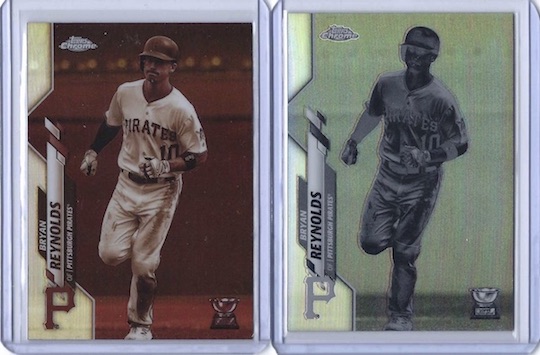 It's been about a year since the release of 2020 Topps Chrome, and I certainly did not help myself by waiting. I haven't seen anything lower than the gold #/50 listed on eBay or COMC. Aside from two Pirates collectors who each have one of the Orange #/25, there is no trace of anything out there that I need. At this point I'll just hope that a big breaker does a 100 case break of 2020 Topps Chrome and maybe some of these will surface...

Until then, here's what I've got so far: 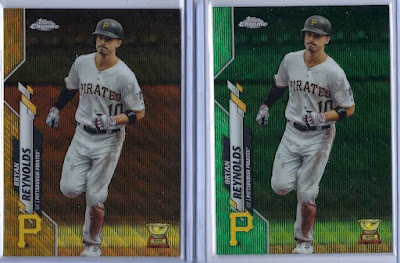 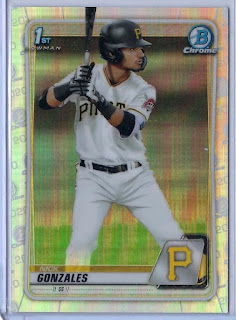 Nick Gonzales - 2020 Bowman Draft Refractor
I'll wager that you'll see a lot more of Nick Gonzales on this blog in the future. Since last posted about him in May, he has moved from the #32 prospect in baseball to #29.  This is my second copy of this card, and I'll likely grab a few more. He has been playing this season in High-A, and I imagine we'll see him rise through the ranks quickly next year. 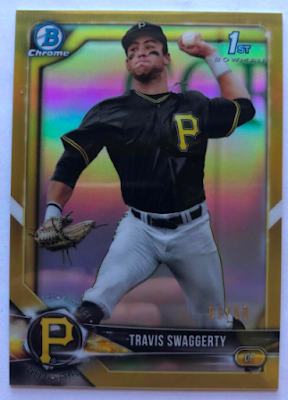 Travis Swaggerty - 2018 Bowman Draft Gold Refactor #/50
Another top prospect in the Pirates system, Travis Swaggerty. Excited to pick up my first gold refractor of his. 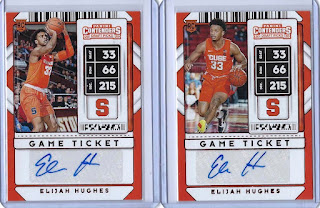 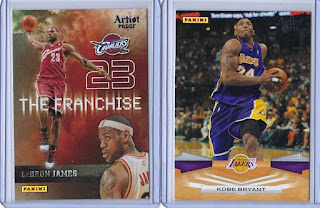 (L) Kobe Bryant - 2018-19 NBA Hoops Silver #/199
(C) LeBron James 2016-17 NBA Hoops Silver #/99
(R) LeBron James 2017-18 NBA Hoops Silver #/199
In the May Mail Roundup, I talked about how I'm hoarding LeBron serial numbered cards. I'm doing the same with Kobe. There's not a specific strategy behind this. Both of these guys are legends, and some day I'd love to have a box full of short printed cards of two of the best players of all time. Maybe it will bring back great memories. Maybe it will pay for my kid's tuition. Who knows.
That's it for this month. It was another great month of card mail. Thanks for following along.