It only took me a month, but I was able to get through the 7 Day Trading Card challenge. I had a lot of fun working through challenge and it reconnected me with some cards in my collection that I hadn't seen in a long time. I'll take a second to pat myself on the back, because I'm proud of myself for staying consistent and getting the posts up. Posting consistently has been tough for me since starting the blog, but I've been going strong with 5+ posts per month for almost a year.

Anyhow, we're back to the regularly scheduled programming which consists of lots of Pirates cards and a slight obsession hoarding Bryan Reynolds cards. 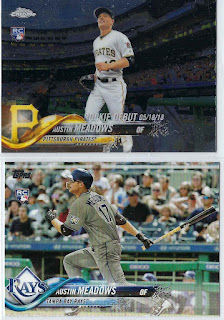 Despite the fact that Topps Update has only 100 cards in the base set, Austin Meadows managed to get himself two cards in the 2018 set. I guess it's a strong possibility when you get traded at the deadline. Both cards above came my via trade on TCDB.

I'm really excited to add the Rookie Debut card to my collection because I was at PNC Park   for Meadow's debut on 5/18/18. It was a pleasant Friday night with an early-summer feel. It was a nice debut for Meadows as he went 2-4. His first ever hit was a single to right field in his second AB, and then he quickly stole second, bring the crowd to a standing applause. 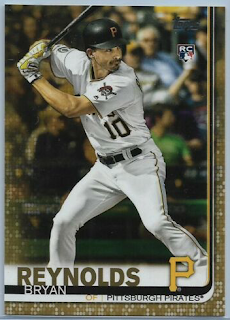 I've chased every parallel of the card above in the chrome version, but this is my first pick up of a "paper" version parallel. It runs about $10-$12 on eBay, which is a small ripoff but I really wanted it for my PC. 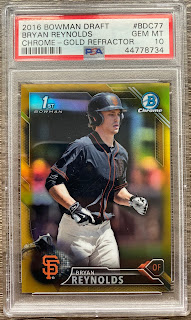 I already own a copy of this card. This surfaced on eBay recently for about the same price as a raw copy so I decided to grab it. Nothing wrong with a PSA 10! 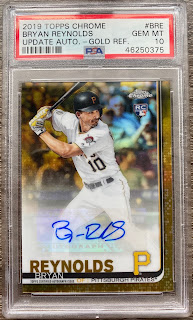 I significantly overpaid for this card, but what the heck. There's only 50 copies of it and many of them probably still live in packs. Not only that - how many of them will show up as PSA 10's? I'll never know, but I didn't want to risk this slipping by. It's a welcome addition to the Pirates Gold Room and my rapidly-growing Bryan Reynolds PC.

Thanks for stopping by!