How many times have you read this on the blogosphere: I've been slacking on here over the past month. No excuses, just haven't gotten around to posting much. Despite my journalistic failures, I've made plenty of purchases and a few TCDB swaps. Time to show off some the highlights from September: 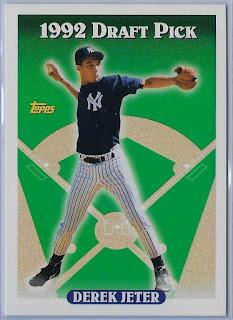 A good friend of mine was cleaning out some old possessions and came across a small card collection from his childhood. He hasn't collected in a long time and has no intentions of getting back in. He's an experienced eBay seller - so he was able to liquidate and make some money. While doing so, he gave me a good deal on this Jeter rookie. It's not an expensive card by any means - I think there are about a million copies of this card out there - but I'm super pumped to add this to my collection. It's my first Jeter rookie. I feel like it's almost a must-have for any baseball collector. 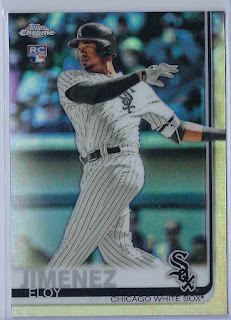 My first eBay pickup of the month. The White Sox were tons of fun this year,  and their young nucleus of players is firing on all cylinders. Their "window is open," and they've got a few great years ahead of them. Hitting in the middle of the lineup you'll find slugger Eloy Jiminez. His career is off to a blistering hot start. After hitting 31 homers his rookie year, he followed it up by hitting 14 homers and hitting .296 in 213 at bats.
Eloy was the hot prospect last yearbut has since been eclipsed by fellow CWS outfielder Luis Robert. He's already been slept on, so I felt it was a great time to grab a nice rookie of his. 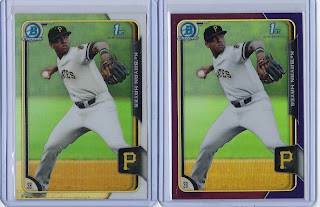 (L) Ke'Bryan Hayes  - 2015 Bowman Draft Picks and Prospects - Chrome
(R) Ke'Bryan Hayes  - 2015 Bowman Draft Picks and Prospects - Chrome Purple Refractor #/250
Ke'Bryan Hayes joined the Pirates big league roster this year, and as one of their top prospects, he did not disappoint. In just 24 games, he hit .376, played Gold Glove caliber defense, and had a WAR of 1.8. I really should dedicate an entire post to his season and I have plenty of his cards to show off. Hayes has the potential to be one of the best 3B in the league, although I fear his prime may be wasted with the Pirates inability to contend over the next several seasons. 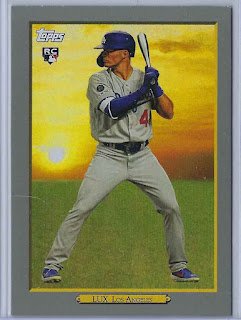 Gavin Lux - 2020 Topps Turkey Red
Acquired via TCDB trade. Lux is another exciting young rookie. I was able to add this in a counter-offer and my trade partner agreed. 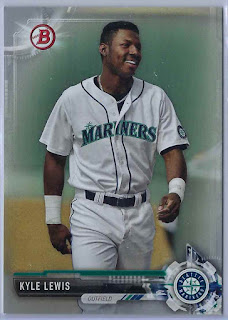 Kyle Lewis - 2017 Bowman - Prospects Silver #/499
Also acquired via TCDB trade. Lewis was a surprising rookie this year and I was happy to pick up a cool prospect card of his. 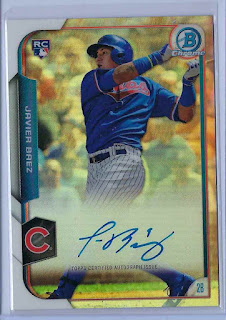 Javier Baez - 2015 Bowman Chrome Rookie Autograph Refractor #/500
As a Pirates fan and Cubs-hater, this one pains me a little bit. When Baez first came up, his demeanor was a little triggering. After developing into a well-rounded and popular ball player, he's earned my respect. "Real recognize real," I suppose. Doesn't mean I'll root for the Cubs.
Now onto some basketball... 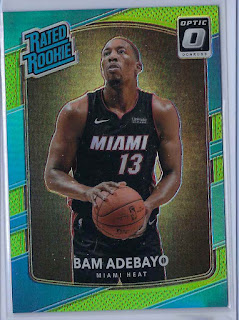 I had a blast watching the NBA finals, specifically watching the Heat make a really special run. I've been following Kentucky basketball closely since 2015, almost never missing a game. I liked Bam's game at UK, but I'll be honest, I didn't predict this kind of early success at the NBA level. In college he was very much a traditional big man, but he's done an exceptional job of adjusting his game to the NBA style. He's developed a great dribble-drive, a reliable jumper, and he's a good inside-out passer.

I actually acquired this card via a Twitter sale. For the record, I don't endorse buying cards on Twitter. I've been part of the Twitter-card community for a while now, so I have a decent eye for red flags and such. Even so, there are no real buyer protections and you could easily get burned. There are definitely some dodgy characters on there. The upside is that you can find some really great deals. Sellers love it because they can avoid the fees. I've made a handful of purchases via Twitter (less than 10) and never had a problem, but I hold my breath every time. 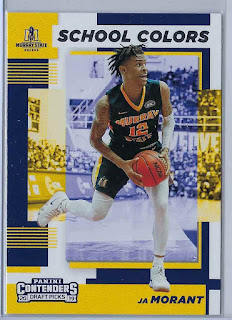 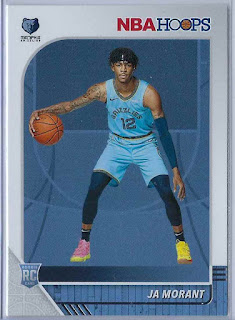 (L)  Ja Morant - 2019-20 Panini Contenders Draft Picks School Colors Insert
(R) Ja Morant - 2019-20 NBA Hoops RC
These two were part of one eBay sale. I went on looking for the just the Hoops base card, but the lowest priced BIN included the Contenders insert so I jumped on it. I think Morant is the best player last year's draft and I'm adamant that he'll have a better career than Zion Williamson. I don't want to spring for any of Ja's other rookies, so Hoops is a great middle ground. 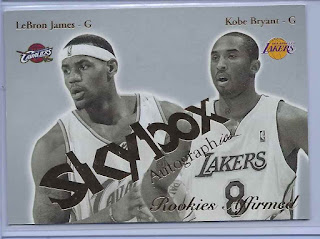 2003 Skybox Autographics - LeBron James/Kobe Bryant Rookies Affirmed Insert
Saved the best for last. This was also acquired via Twitter, but not blindly. I had already traded with the seller through TCDB and I was very happy with our trade. The cards were sent quickly and packed well, and the purchase of this card was no different. This was a bigger purchase for Twitter and I probably wouldn't have done it if I wasn't familiar with the seller.
This card is awesome. Two of the greatest players on one card . It's also from 2003, LeBron's rookie year, so we'll call it half of a rookie card. My only gripe is the gigantic Skybox logo across the middle of the card which doesn't make a ton of sense to me. We would have been way better without it.
I have a nice little collection of both LeBron and Kobe and this will fit right in.
Thanks for stopping by.