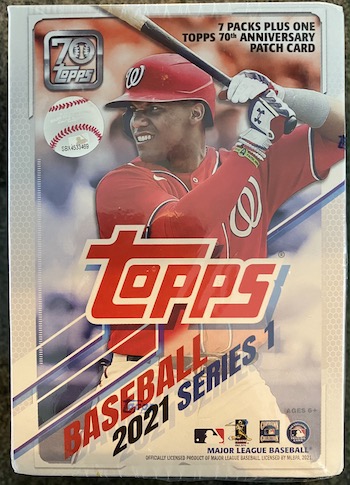 Baseball season is around the corner, and that means Topps Series 1 is beginning to hit (and hopefully stay on) the shelves.
Last week I randomly logged on to Twitter at about 8:30 AM for absolutely no good reason. I saw two posts announcing that Target had 2021 Series 1 Blasters on their website, and I was lucky to grab a few. I think they were live for about 20-30 minutes before selling out. Considering the state of the card market that's basically an eternity. I don't make a habit out of getting on Twitter early in the morning so I feel lucky to have seen the deal. I've noticed some other collectors have had luck finding some on shelves, so hopefully this is not a product that retail flippers will target. I don't know why they would.
The package arrived to me yesterday and I busted open a blaster. 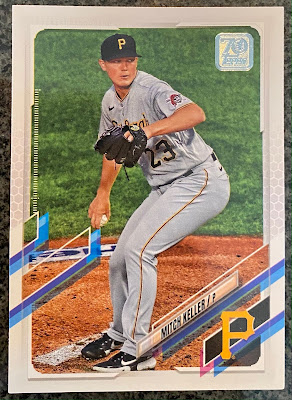 Here's the base design. The tiny nameplate is catching a ton of heat and rightfully so. I don't love the diagonal name, and I really don't like the blue graphic coming from the left side of the card. I have no problem with the logo and accompanying banner in the bottom right, but the addition of the nonsense on the left side is totally unnecessary.
On the plus side, I really like the white border. I'm a BIG border guy. I also like the Topps silver 70th anniversary stamp.
To conclude my thoughts on this year's design: It's more of the same from Topps. Some good, some bad. 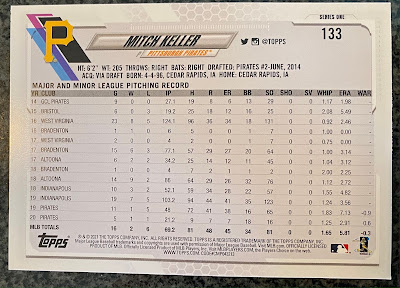 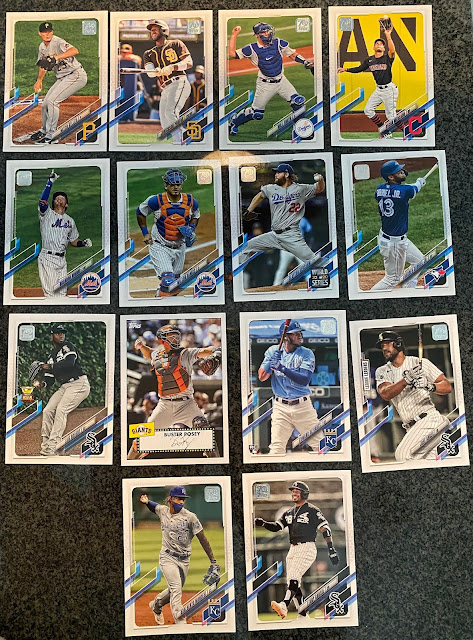 Pack One
The first card I pulled in 2021 is a Pirate! Maybe it's a World Series omen. Highlights in this pack are the Luis Robert Rookie Cup and the Buster Posey 1952 Insert. Based on this box, you're going to find two inserts per pack. 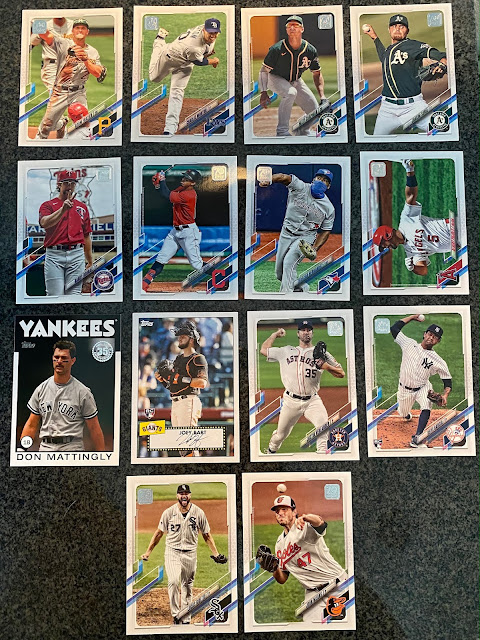 Pack Two
This pack opened up with yet another Bucco, so this is an undeniable sign that the Pirates will in the World Series this year. Jokes aside, this was a great start to a team set. This was a great pack. The Mattingly 1986 design is a beautiful card. I love the black and white theme. Joey Bart is a bigger-name Rookie, and the Deivi Garcia rookie is a great pull too. 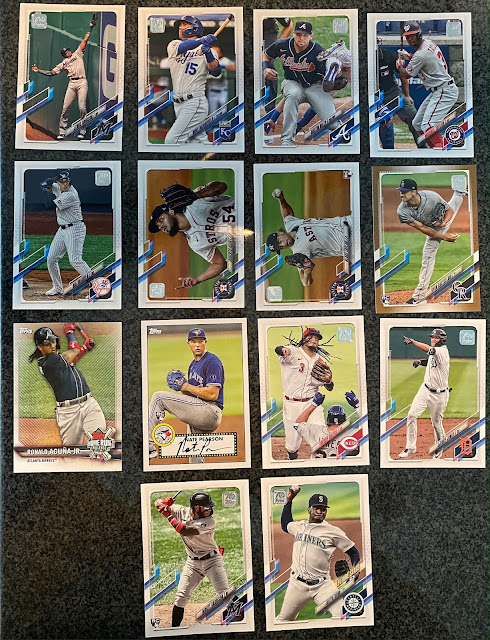 The Bucco streak ends, but this packed yielded another three rookies, as well as an Acuna Home Run Challenge card. I've never actually submitted one. Maybe this will be the year. 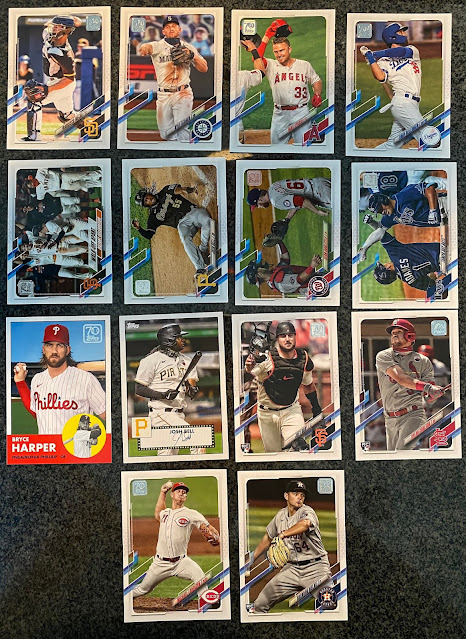 Pack Four
The (former) Buccos return with both a Josh Bell base card and a 1952 insert. I'm sad to see Josh leave Pittsburgh, but I am fully onboard with the rebuild. His best years could have been wasted in Pittsburgh. I will continue to collect him, even in Nats gear.
The other insert is part of the "70 Years of Topps" set. This pack also had a Joey Bart base rookie. 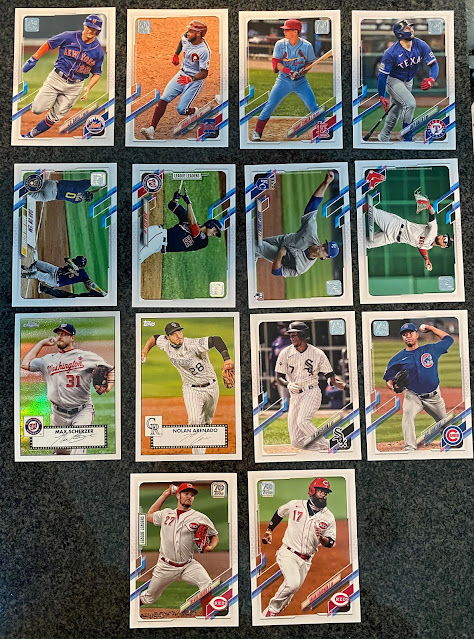 Pack Five
Pack five contains my favorite insert that I've seen in Topps flagship in quite some time: Chrome 1952 Topps Redux. In terms of blogger-collectors, I think I'm in the minority here - but I love retro designs redone in chrome. Turkey Red Chrome, Allen and Ginter Chrome, give me all of the chrome.
I pulled one 1952 Chrome, and it's Max Scherzer. I don't think my picture does it justice. It's pretty. It has the refractor-shine, but it isn't overdone. 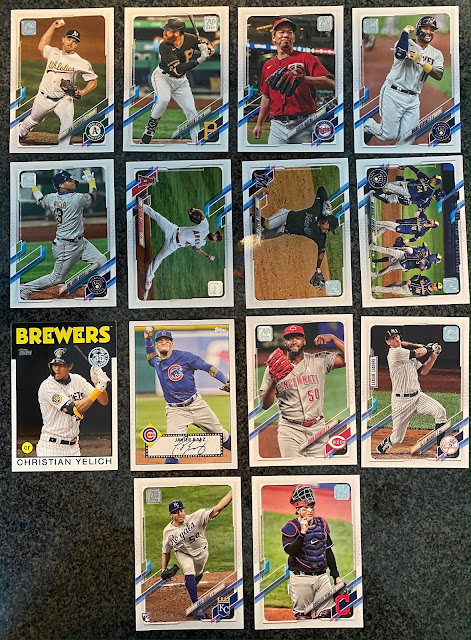 Pack Six
Another Pirate, Colin Moran makes an appearance. Another 1986 insert with Christian Yelich, and a 1952 insert of Javy Baez. 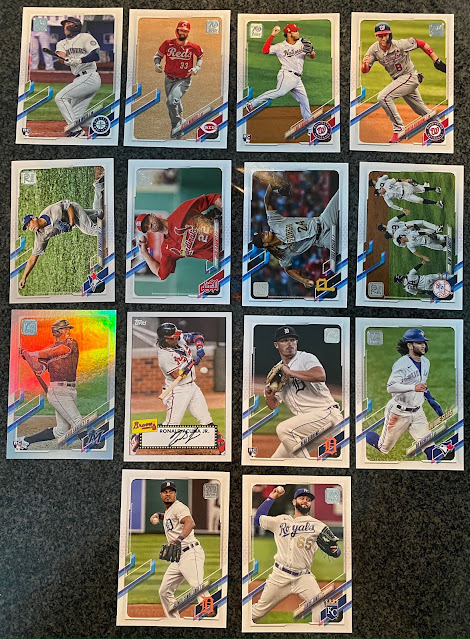 Pack Seven
One last (former) Pirate, Chris Archer. I was excited to pull a Rainbow parallel of Rookie Jesus Sanchez. I don't know a ton about him, but I do know that he has been in the Marlins top prospect rankings for a few years. I didn't realize he had debuted in the majors. It looks like he had only 25 ABs last year. Maybe he'll be a bigger part of the Marlins outfield this year. I'll definitely be holding this one in hopes he takes off soon. 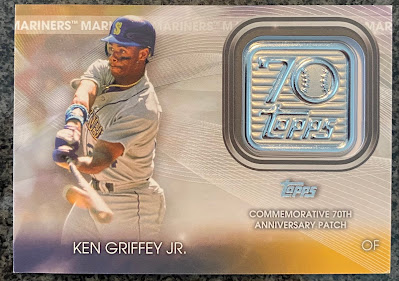 Commemorative 70th Anniversary Patch Pack
Each blaster guarantees one of these. There are only 25 in the set. The whole set consists of Hall of Famers and a few soon-to-be HOFers (Kershaw, Trout, Miggy, etc.). I loathe manufactured patch cards for several reasons - the main reason being that they're a pain to store. I don't have any toploaders that fit them naturally and you can't squeeze them into a penny sleeve. I usually just list my patch cards on eBay right after getting them and consider it a $5 rebate on the box. It's always great to see Ken Griffey Jr., but his fate will likely be the same as his predecessors.
I'll be cataloguing these into TCDB today, and aside from the rookies everything here is for trade.
Thanks for reading.
Posted by The Bucs Stop Here at 10:35 AM