Time for the yearly recap of my top cards of the year! It was a great year of card collecting for me, with lots of spare time to organize, sell, trade, and add to the PC.
I've been pretty lousy at posting on the blog lately, but I've been really active with collecting which is the bigger half the battle. I've been selling some higher-end stuff and building up funds to go for some larger PC items. If I'm not posting and I'm not actively collecting, that's when I get away from the hobby and that sucks.
I did a top ten post last year and had lot of fun with it. I probably handled more cards this year than ever before, so it was tough to narrow it down to ten, but here we go:
Number Ten 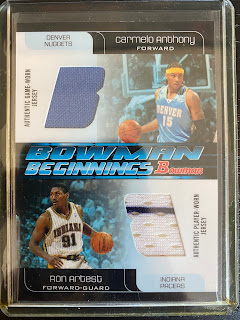 Carmelo Anthony/Ron Artest - 2005-06 Bowman Beginnings Relic
Acquried via: TCDB trade
This is definitely the goofiest card of the ten, but I really love it. I acquired this the other day via a fun TCDB trade. My trade partner sent me another 'Melo jersey card as well as Chris Paul Rookie. In return I sent a random assortment of Bowman baseball and football set needs, most of which were short printed. It was an awesome trade. I don't formally collect Carmelo cards, but he falls into the Syracuse Alum category and I have a small stash of his stuff. It's so random to see him on a card with Ron Artest, of all people. The Pacers pinstripe is the icing on the cake.
Number Nine 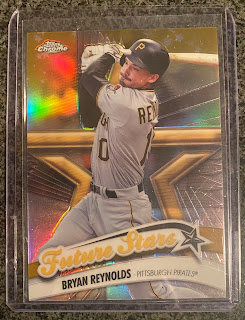 Bryan Reynolds - 2020 Topps Chrome Future Stars Insert Gold #/50
Acquired via: eBay Purchase
When I saw that Bryan Reynolds had a Future Stars insert, I was pretty excited. I can't remember the last time a Pirates player appeared in this set, let alone my favorite player. I was lucky to pull the base version out of a pack. If you're a regular reader, you know I had find a gold parallel. It took a while for one to show up on eBay, but when once it did I was all over it. Reynolds had a pitiful 2020 season, so his cards have become more affordable and this didn't cost much.
Number Eight 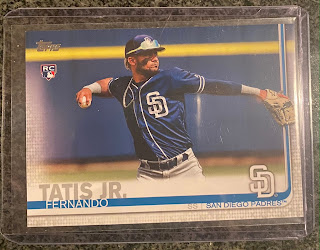 Fernando Tatis Jr. - 2019 Topps RC
Acquired via: eBay Purchase
One of my better habits is holding onto some unopened boxes. I have a great stash of sealed boxes, and one of the gems is a pair of 2019 Topps Series 2 blasters. Their value is higher than ever, and I'm contemplating selling them. I'm still undecided, but I hate the idea of selling away a great a chance at Fernando Tatis Jr.'s true rookie. We're all hunting the next Mike Trout, and we may never see that. But, if anyone is going to close, it might be this guy. He's the real deal. To help alleviate the potential sting of selling the blasters, I made decided to buy a single. I think it was only about $30. Baseball cards are much cheaper in offseason, and his type has already died off as everyone is looking for NEXT hot rookie already.
Number Seven 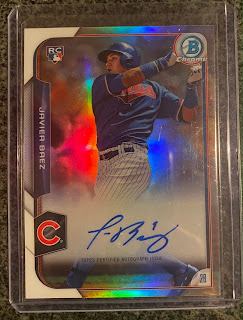 Javier Baez - 2015 Bowman Chrome RC Auto #/500
Acquired via: eBay Purchase
It's not often that I hunt for an autograph for a Pirates-nemesis. The Pirates suck, so it makes the rivalry less bitter, if you ask me. I love Javy Baez's game and I wanted to add a sweet card of his to my collection. So, I did!
Number Six 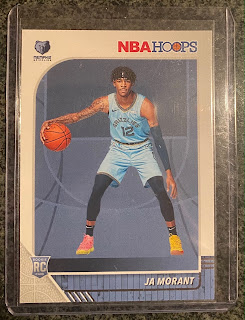 2019-20 NBA Hoops Ja Morant RC
Acquired via: eBay Purchase
I believe Morant to be the best player in the 2019-20 draft. I like Zion, and I'm rooting for him, but I think Ja is the guy. It's a crazy-loaded draft class and there are about a dozen other players that are already having great sophomore campaigns, so the best player may very well be someone NOT named Zion or Ja. Time will tell.
Back before the hobby got crazy, I opened a good amount of 2019-20 Prizm and Optic. I pulled Ja rookies from both... and of course sold them. The return seemed to be good to pass up for base cards. Well, a year later, their value has tripled. Woof.
I felt some sellers remorse and wanted a Ja rookie back in collection, but I'm wasn't willing to pay obscene prices for a base rookie. I settled for the consolation prize - NBA Hoops. Hoops is one of my favorite basketball releases, and it's become a good budget option in an insane card market. If Prizm is Ferrari and Optic is Mercedes, Hoops is Honda. Old reliable.
Number Five 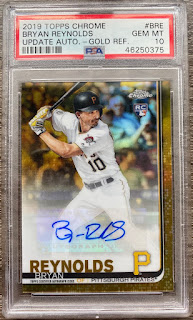 Bryan Reynolds - 2019 Topps Chrome Update Gold Auto #/50 - Graded PSA 10
Acquired via: eBay Purchase
We're now over the halfway point and the cards are getting juicy. This card is about as close to perfection as you can get. It's my favorite player and it's an autograph. It's from my favorite set, and it's my favorite color parallel. To top it all off, it's a perfect 10/10. I overpaid for this, big time, but it will be a permanent centerpiece in my Reynolds collection.
Number Four 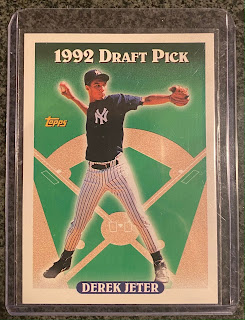 Derek Jeter - 1993 Topps Gold
Acquired via: Purchase from friend liquidating collecting
This card is a classic. A good friend of mine recently went through his childhood collection and sold off anything of value. He's not much a collector these days, and I helped him valuate some of his cards and liquidate his collection. I had wanted to add a Jeter rookie to my collection for a while and this was one of the cards he was selling. He gave me a fair deal. It's not Mint, but it's in good shape and it's one of the rare times I got buy a card off of a friend. A great memory for me.
Number Three 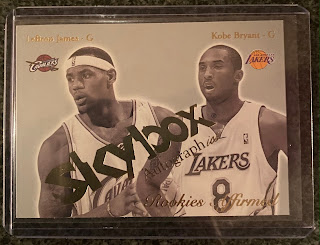 LeBron James/Kobe Bryant - 2003 Skybox Autographics
Acquired via: Twitter Purchase
This card is so awesome. It's technically a LeBron Rookie, and he's paired with the late great Kobe Bryant. This card features two of the three best players in the history of the game, IMO. My only gripe with the cards is the wholesomely unnecessary Skybox logo that gashes across the middle of the card.  Aside from that, it's flawless.
Number Two 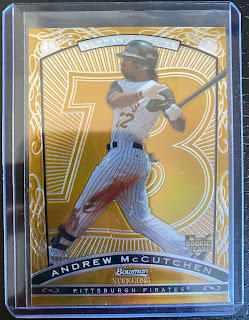 Andrew McCutchen - 2005 Bowman's Best RC Gold #/50
Acquired via: Trade with Collecting Cutch
Huge, huge shoutout to Collecting Cutch for sending this my way. This card is. So. Badass.  It is the centerpiece of my Cutch collection, and no better way to acquire it than from the King of Cutch himself.
Number One 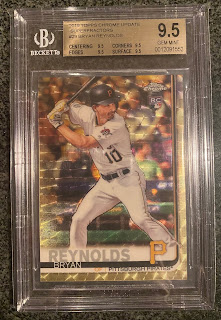 Bryan Reynolds - 2019 Topps Chrome Update Superfractor #1/1 - BGS Graded 9.5
Acquired via: eBay Purchase
Making it's blog debut, my favorite card. Yes. I did it. I acquired the card I never thought I would, Bryan Reynold's Topps Chrome Rookie Superfractor. I have been chasing the rainbow of this card, but from the jump I automatically assumed that I would never see the Super. It sold on eBay very shortly after the product it shelves. I set up an eBay saved search and I was floored when it surfaced for a .99 cent auction. There was no way I was losing. Admittedly, I paid a lot for this card. But this was a once-in-a-lifetime opportunity and I knew if I missed it I'd never see it again.
As for the grade, it's a nice bonus. I don't understand why anyone feels the need to grade a superfactor. In my mind, grading cards is a way of separating a card from it's identical peers, if you will. But a superfractor has no peers. It's a one of a kind. Why grade it?
Regardless, I'm extremely pleased that it came back as a Gem Mint 9.5. Even better, it has 9.5's across the board on the subgrades. I think anything less would have been a disappointment. It's also nice to have it secured and encased.
Getting this card is a big deal to me. In the past, if you asked me to pick a favorite card in my collection, it would have been tough for me to answer. Now, I can confidently and proudly answer that question.
That's all for the year 2020. Thanks so much for stopping by, and here's a great year of collecting in 2021!