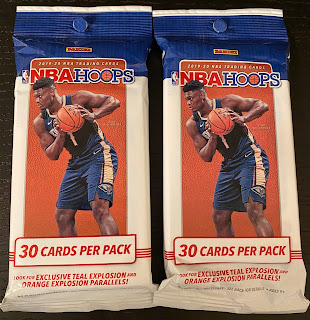 Each time I'm near a Target or Walmart, I still make a point to swing through to check for Prizm. There weeks ago I found two blasters of Prizm at Target but I've had no luck since. If I recall correctly, there were several blasters there that day and I'm starting to regret not grabbing more.

With my recent shortcomings at finding more Prizm, I decided to settle for some NBA Hoops. 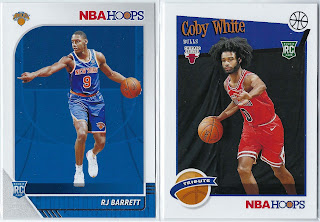 Each pack had several rookies, and I'm excited that the RJ base made an appearance. I imagine this picture was taken during some kind of photo shoot. Gesturing to your make-believe teammates to set a screen for you in a photoshoot is a weird thing to do... but I guess it comes natural to RJ. Also making an appearance is Coby White who could be one of the best rookies in this class. 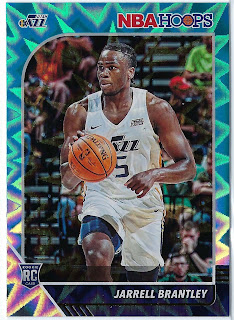 Both of my backs contained a teal explosion parallell, so I'm going to assume these fall one per jumbo pack. Jarrell Brantley was the 50th overall pick out of the College of Charleston. By no means a household name, but at least it's a rookie to stash away. 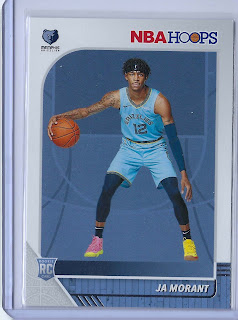 Likely the best pull of the pack, Ja Morant base card. Not Zion, but a nice consolation prize.

On to pack two: 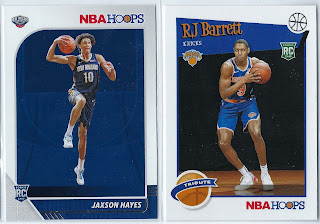 Barrett makes another appearance, this time on the Tribute base card. Jaxson Hayes shows up as well. I'm high on him as well. He has the athleticism to be the best big man in the draft. 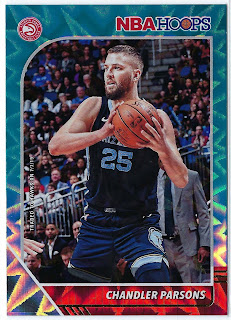 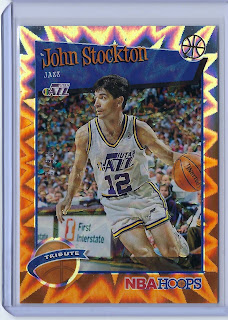 However, I was lucky to pull a orange explosion of Jazz legend John Stockton. It's tough to see, but if you look closely near John's right bicep, you'll notice this card is serial numbered #/25. Orange can be a tough color for parallels, but somehow this looks pretty sweet. I think it's the 90's design paired with the 90's player. A worthy tribute to Stockton. Well done, Panini.

So for two jumbo packs, this turned out pretty well.